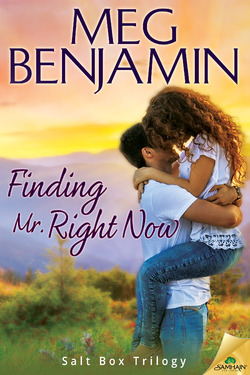 Reality can be hotter than fiction.
"The Salt Box Trilogy, Book 1"
Monica McKellar, associate producer of "Finding Mr. Right," is desperate. One of the show s bachelors has bailed one week before shooting starts. She not only needs a replacement ASAP, he has to get the temperamental bachelorette s stamp of approval.
Fortunately there s a hot guy right under her nose who s a perfect fit. Unfortunately, he pushes all "her" hot buttons. Until the show s over, her hands and every other part of her body are tied.
When Paul Dewitt signed on to write for the reality show, Bachelor #10 wasn t supposed to be in his job description. He fully expects to be cut early on, which will free him to focus on the real object of his attraction. Monica.
Instead, he s a finalist, and they re all packed in an SUV climbing the Continental Divide, headed for Salt Box, Colorado. Where stampeding horses, vindictive tabloid editors, and one capricious bachelorette s waffling over suitors may conspire to end Paul and Monica s romance before it even starts.
Warning: Contains hot sex on the sly, cold nights, creaking wicker couches, and a gypsy wagon that gives a whole new appreciation for the pioneers."

I picked this up because I really enjoyed the author’s Ramos Family Trilogy (Medium Well, Medium Rare and Happy Medium) and was hoping that lightning would strike twice.

Instead, I have an entire SUV-load full of mixed feelings and reactions. As you’ll read in a minute.

The love story here takes place on the disaster-prone set of a reality TV show. As many things as go wrong, you’d think this was on a Survivor-clone, but it isn’t. Instead, this is an alternate version of The Bachelor, where one of the photogenic losing bachelorettes becomes the star of the first series of The Bachelorette. Although I think this kind of happened.

In any case, in the book, the shows are produced by a fairly downmarket cable production company, and everything is on a shoestring. That might make good comedy, and probably did for some readers.

Unfortunately for both of them, she finds that love with one of the erstwhile bachelors. Which is where a good chunk (hunk?) of the sexual tension comes in. Both Monica and Paul are single and unattached, and would normally be free to explore whatever is happening between them.

But they can’t until the show is over, because it will ruin an illusion that no one is really buying into. And they can’t seem to hang on to their pants for the six weeks needed to complete the show.

Escape Rating C+: It’s hard to rate this one. I found the scenario behind the book incredibly contrived. That could be because I’m not a fan of reality TV.

I liked the two protagonists quite a bit. Monica is incredibly put upon as the assistant producer, but she keeps taking the hard knocks and doing her job. She’s self-aware enough to know that jobs in show business are hard to find, and that this is what she expected when she decided to be in the business. But it isn’t until she meets Paul Dewitt that she starts looking for the next phase in her life. Not just that it would be great to have someone to come home to, but that she has learned all she can where she is, and it’s time to move up the ladder. Or on to a less dysfunctional production company. Or both.

I also liked Paul, although the situation he finds himself in seems as contrived as the TV show. He was not a contestant to be one of the bachelors. He’s a writer for the show who found himself in the wrong place at the wrong time and got dragooned into the bachelor pool by the self-absorbed bachelorette and the tyrannical producer.

And that’s where things kind of go off the rails for this reader. A big part of this story is all about Monica becoming the “babysitter” for the self-absorbed sweetheart diva of a bachelorette. Little Ronnie probably isn’t half as dumb as she acts, but she comes off as a combination of wide-eyed innocence, total vapidity, and utter self-absorption that made me clench my teeth every time she appeared. She’s also incredibly manipulative, but you’re never quite sure just how deliberate she is in that manipulation.

Except for Monica and Paul, all of the other producers and writers involved with this production company are at best totally overwhelmed and completely oblivious to everything outside their own sphere of crises to solve, and at worst, and this is most of them, they are actively vile. There doesn’t seem to be anyone likable in the company except for Paul and Monica. The photographer on the shoot with them isn’t actively awful, but that’s as high a bar as anyone else in the company manages to reach.

So it feels like the show is toxic, which means that their work environment is toxic. One understands why they both want to escape, but one questions their sanity at being involved at all. It wouldn’t be fun to work in, and it isn’t fun to read about, either.

On that other hand, I liked the town of Salt Box where they get stranded for a couple of days. It’s a quirky place, but it feels more real. Or at least more nuanced in its insanity. While one of the locals is often called “Dick the dick”, when we (and Monica) get to know him a little better, we discover that while he is the curmudgeon that he appears, he isn’t really quite that big of an asshat. He just doesn’t suffer fools, and tests everyone in his orbit to make sure they are not before he lets them in.

At the end of this story, I feel more than a bit of sympathy for Dick. He discovers that Paul and Monica are not fools, and lets them into his circle and out of the circle of Hell they are currently working in. And he makes sure that the rest of the cast and crew of that show all stay OUT.