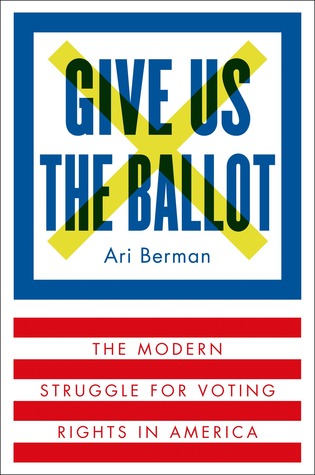 A New York Times Notable Book of 2015A Washington Post Notable Nonfiction Book of 2015A Boston Globe Best Book of 2015A Kirkus Reviews Best Nonfiction Book of 2015An NPR Best Book of 2015Countless books have been written about the civil rights movement, but far less attention has been paid to what happened after the dramatic passage of the Voting Rights Act (VRA) in 1965 and the turbulent forces it unleashed. Give Us the Ballot tells this story for the first time.
In this groundbreaking narrative history, Ari Berman charts both the transformation of American democracy under the VRA and the counterrevolution that has sought to limit voting rights, from 1965 to the present day. The act enfranchised millions of Americans and is widely regarded as the crowning achievement of the civil rights movement. And yet, fifty years later, we are still fighting heated battles over race, representation, and political power, with lawmakers devising new strategies to keep minorities out of the voting booth and with the Supreme Court declaring a key part of the Voting Rights Act unconstitutional.
Berman brings the struggle over voting rights to life through meticulous archival research, in-depth interviews with major figures in the debate, and incisive on-the-ground reporting. In vivid prose, he takes the reader from the demonstrations of the civil rights era to the halls of Congress to the chambers of the Supreme Court. At this important moment in history, Give Us the Ballot provides new insight into one of the most vital political and civil rights issues of our time.

Give this book to anyone who believes that the struggle for voting rights in America is over. Because the all too recent history told in this narrative shows all too clearly that it is far, far from over.

This is a difficult book to review. The history related is searing in its intensity. And it is impossible to be neutral. For those who are of the liberal persuasion, it is an indictment of man’s (and woman’s) continuing inhumanity to those who are not part of the white majority. For those who are conservative, it will read very differently. I’ll admit that my mind just won’t go wherever that it.

I wanted to take a bath when I finished, because the things that were done to suppress the African-American vote (and the Hispanic vote) were disgusting and sometimes deadly. In reading this history, it feels as if the deadly has mostly moved to other arenas, but the disgusting is still very much alive and kicking.

A voting rights case in Forsyth County, Georgia, (one county over from my house) was just settled this past week. Voting rights are still being fought for in the U.S., but the fights have moved from the Edmund Pettus Bridge to the judicial system. The fight is no less bloody for that blood being time and ink instead of red.

This may be progress of a sort, but it is progress that must be constantly and rigorously defended.

And in a nutshell, that is the lesson of Give Us the Ballot. The Voting Rights Act of 1965 was landmark legislation, but it also marked a beginning and not an ending. Poll taxes and literacy tests were finally over. The battleground simply moved to Voter ID laws, redistricting and “at large” elections.

Escape Rating A: This is a book where I think it will be impossible for any reader to read dispassionately. As a liberal, I frankly wanted to wash at least my hands after reading it. I found the indictment compelling and also slightly nauseating. Both that blatant attempts to suppress the votes of blacks, hispanics and students continue, but that they are all too often successful and cloaked in coded language. And frankly, I still hear “dog whistles”.

Progress has been made, but it has also been beaten back by those in power who want to retain that power. And the tools used to beat that progress back seem designed to obfuscate either the motives of the perpetrators or the consequences of their actions. Or both.

This history clearly shows, at least to this reader, that Voter ID laws, reduction in the hours of early voting, voter roll purges and other such measures are both racially motivated and completely partisan. They are designed to suppress the votes of groups that generally vote for the Democratic Party. For someone who votes liberal, it reads like an attempt to turn the clock back and prevent the changes to the population that are occurring in fact from having a proportional impact at the ballot box and in the politics of the country.

Someone with a more conservative political inclination will undoubtedly see this history differently. I doubt that anyone can be neutral on this subject. This history will certainly make you think, whatever side of the political spectrum you fall upon. Thinking about the right to vote, and about making sure to exercise that right whenever possible, is always important.

Reviewer’s Note: Give Us the Ballot was nominated for the American Library Association’s Notable Book Awards for this year. As part of the Notable Books Council, I am pleased to say that this book was on our Awards list for this year, along with other outstanding works of nonfiction, fiction and poetry. Give Us the Ballot is an intensive history of an important and timely topic. It was also a perfect book to re-read and review over the Martin Luther King Day weekend.

One thought on “Review: Give Us the Ballot by Ari Berman”