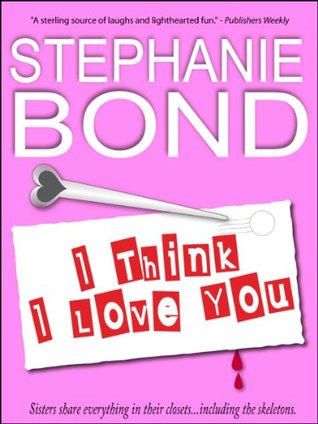 So there's some bad blood and bruised egos among the Metcalf sisters. At least they're reuniting. A cause to celebrate? Not for Justine, Regina, and Mica. Their parents are splitting up and the family business is going on the auction block--just a little reminder of how much they really have in common...
Take the local bad boy who proposed to Justine, seduced Regina, and ran off with Mica. Add the unsolved murder they witnessed when they were young girls, and their vow to keep it a secret. Toss in their knack for being drawn to shady men, and there's only one thing left for them to do--put the bonds of family loyalty to the test.
But it takes courage to outsmart a murderer, know-how to avenge the cad who betrayed them, and patience to bring their parent back together. Three talents. Three sisters. And who knows? Maybe even three new chances to fall in love when Justine, Regina, and Mica discover how much they're willing to risk--and forgive--in the name of sisterhood...

When I found this well-worn paperback in the clearance bin at my local used bookstore, I knew I was onto something; the spine was bent, and many pages showed evidence of having been dog-eared from many re-readings. The back cover teased me with a tale of intrigue and romance, so I grabbed it, and two days later, was done reading it. I’m a big fan of Nora Roberts’ trilogy format where she has three stories, interconnected, and three romances come out at the end. Clearly, it works for her, and it sells lots of books, so I’m not surprised that she does that. But Stephanie Bond tries to do it all in one volume: three sisters who, despite their dysfunctional family, are bound together by a shared secret, and by a cad of a man.

Twenty years ago, three teenage sisters were witnesses to a murder, a secret they’ve kept for two decades as their lives have taken them to the far corners of the country. But finding out that their parents are splitting up brings one home, while a second is hiding out from an angry woman whose husband she’s had an affair with, and the third is running away from the cad, to give herself time to think about her life and career. Their lives, and their secrets, begin to unravel as the man wrongly convicted of their aunt’s murder all those years ago is seeking a new hearing, and the town is fairly crawling with lawyers and police trying to figure out what really happened all those summers ago. Meanwhile, an attorney-turned-appraiser is busy pricing all the antiques in the family store for auction, so they can settle their debts before the sisters’ parents break up.

Still with me?  Good. It’s all very complicated, I know.  Regina, the bookish middle sister, is intensely attracted to the handsome appraiser who, being a non-practicing attorney, has all sorts of useful skills outside the bedroom. Big sister Justine is running from an insanely angry woman who wants to kill her, and the cop who’s hunting the madwoman is awful darn cute, and he’s got a thing for the tall redhead. Dark-eyed, dark-haired baby sister Mica is running away from the abusive man who she stole from Justine years ago–who had made passes at Regina, before that–and her modeling agent sure is awfully sweet to her. If that’s not enough, Dean follows her back to their hometown, where he has the gall to get murdered–and the sisters’ father is the lead suspect!

Throughout all this mayhem, the three sisters are finally back in the same house after many years apart, and Justine and Mica, in particular, just aren’t getting along, which is kind of to be expected. After all, Dean left Justine on their wedding day to run away with Mica. Not cool. Regina tries and mostly-fails to keep the peace between them, and her exasperation shows in an ironic wit when she’s dealing with the flirtations of Mitchell while she’s helping him with the appraisal work.

A lot of the book is spent chasing around the clues to two murders, one fresh, and one twenty years cold. Regina’s beau Mitchell is most helpful, but we only hear about the other two men from “their” sisters. It isn’t until the very end that they show up for cameos. That would be my one complaint about Bond’s attempt at three romances in one novel: it’s unbalanced, and deeply so. We follow Regina and Mitchell, but Justine’s romance with Officer Lando, and Mica’s with her agent Everett, really don’t start to show until we’ve nearly reached the dénouement. Yes, it’s kind of obvious that they will get together into those pairings, but I’d much rather have spent some time seeing that happen. After we find out who the real villain was–and it’s not who you think, at all!–we wrap things up pretty quickly, with Justine and Mica getting involved with their men only after they get back to their homes.  Happy endings all ’round, of course, but it seemed just a little abrupt to me.

Escape Rating: B+. I like romances, and I like mysteries, and this tale had both. The trail of clues to the murders kept me interested enough that it was hard to put this book down. I was kind of stunned when we finally unmasked the villain, as I’d not seen it coming, and there were some tense moments there. The romance between Regina and Mitchell was interesting and entertaining, and Regina’s character was enough of someone I could identify with that I could get drawn into her story very well. Justine and Mica’s lives are different enough from mine that I had trouble identifying with them, and as noted, the romances for these two women were at-best glossed over, when they could have been more-deeply covered. This story had a lot going for it–interesting characters, romances, mysteries, almost a comedy of errors in some ways, but doing all that in one volume proved difficult for Bond, and while the book is an enjoyable read, there are a few aspects that left me feeling a little unfulfilled.

I’ve not read any of Stephanie Bond’s work before, but I look forward to finding another one.