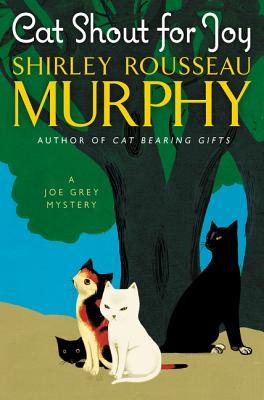 Awaiting the birth of his first kittens, feline P. I. Joe Grey, his companion Dulcie, and their furry sleuthing pals must unmask a killer preying on some of the most vulnerable citizens in the charming California coastal community of Molena Point.
For Joe Grey and Dulcie, life is a bittersweet mix of endings and beginnings. While they joyfully await their first litter, they are also sad for their friend, the old yellow cat Misto, whose time on earth is drawing to an end. But Misto tells them an exciting future awaits: among the litter will be a little calico returned from the distant past who will be born with the same ancient markings, and the adventurous spirit of Joe Grey.
While the proud parents await the birth of their babies, their humans have their hands full with projects of their own. Kate Osborne has bought the old Pamillon estate and Ryan Flannery is building a new cat shelter as part of their volunteer rescue project. The criminals are busy, too. The Molena Point PD has stepped up patrols to apprehend a mugger attacking the local elderly. The case becomes a homicide when one of the victims dies, leaving everyone in the town—including Joe and Grey and his furry sleuthing companions—on edge, just when the kittens are about to arrive. When Dulcie gives birth, her little calico is just as Misto predicted, as if she has come back to the world from mythic ancient times.
But the celebrations will have to wait. A murderer is on the loose—and neither young nor old is safe until the culprit is found.

I think the art on the cover of this entry in the Joe Grey series is intended to represent Dulcie and Joe Grey’s impending kittens. The calico is Courtney, the white cat is Buffin and the dark one is Striker.

Of course I could be wrong about the picture, but I’m right about the kittens. The joy in this book is that Dulcie is expecting, and part of the story is Joe Grey’s, and everyone else’s, reaction to Dulcie’s impending motherhood.

No one except the old cat Misto is certain whether the new kittens will be speaking cats like both their parents. Joe Grey is uncertain about which instincts will rule him, his intelligence or his feline instincts. He is more than smart enough to know that whatever happens, the kittens bring change.

This is also a story where one door closes, and another door opens. As Dulcie enters her last days of pregnancy, the old seer cat Misto breathes his last. All the humans and all the speaking cats love the old tom, and he and his sometimes otherworldly wisdom will be missed.

And in the midst of all of this emotional upheaval, Joe Grey, and Max Harper, the police chief, have a case. At first, it seems like someone is targeting the frail and elderly in Molena Point, for “shits and giggles”. At first no one is harmed and nothing is stolen. But a series of elderly residents are attacked from behind and knocked to the ground while their assailant runs away in glee.

But the attacks are on the frail, and as the list of “prank” victims rises, so does the accidental death toll. Until one of Ryan’s young assistants is shot on a job site, and it’s suddenly clear that whatever is going on, there is someone out there masking a killing spree with a series a nasty muggings.

Partly because he needs to distract himself from all of the emotional upheaval, and partly because he can never resist a good mystery or the opportunity to put away a bad person, feline detective Joe Grey puts himself into the thick of the investigation, sniffing out important clues and pretending to be an innocent kitty as he listens in to evil plots and evil people who plan to escape their consequences.

It is Joe who provides the vital links between the series of muggings and a heinous San Francisco crime, but it’s a force of nature that delivers the baddies to their just rewards.

Escape Rating B+
: The fun in this series is watching the cats figure out ways to both investigate the crimes and to give the police the evidence they need without revealing themselves. In this age of caller ID and instant tracking of everything everywhere, concealing their identities is an ever increasing challenge.

And they know they must conceal themselves. Not only would revealing themselves to the police endanger any evidence they provide, but there is always a risk that someone will discover who and what they are and want to take them away for experimentation. The more people who know their secret, the greater the risk.

In this entry in the series, it’s the emotional issues that hold the forefront, and the case is often in the background. This book represents huge changes for the characters. Joe Grey and Dulcie now have kittens to train. While they are proud of their new family, the kittens also increase the risk. How does one teach an intelligent, curious and playful baby that it is not safe to talk or burble in front of the humans? Joe Grey and Dulcie discovered their voices in adulthood, they don’t know what it is like to raise speaking kittens. Assuming that they will have speaking kittens, which is not certain to anyone but old Misto.

At the same time, the passing of Misto is sad and beautiful. As is so often the case, Misto is ready to go, but his loved ones are far from ready to let the wise old cat leave. Readers who have experienced the loss of a beloved companion animal will need lots of tissues to get through his passing. Just thinking about this part of the story gets me in the feels. 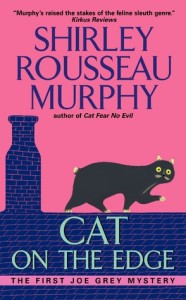 ystery takes a back burner in this entry in the series. As we discover, the killers and their rationale are both more than a bit nuts. Also, one of them is so completely unlikeable that readers will find themselves hoping she is guilty of something from the very beginning, just so she gets what’s coming to her. And that’s well before we think she’s guilty of anything beyond being a bitch. The ending of the mystery occurs offstage, and loses a bit of its cathartic value at being reported second-hand.

From the moment in the first book in this series, Cat On the Edge, when Joe Grey uses his new-found voice to order delivery from his favorite deli and charges it to his human, the big grey tom snagged a piece of my heart in his claws, and he hasn’t let go yet.I hope that there will be a 20th book in this marvelous series, and soon. I enjoy my visits to Molena Point, and I can’t wait to see what trouble the kittens will get themselves, and their parents, and their humans, into next! 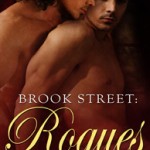 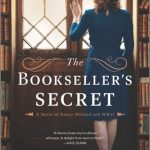 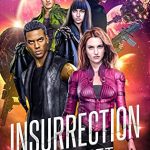