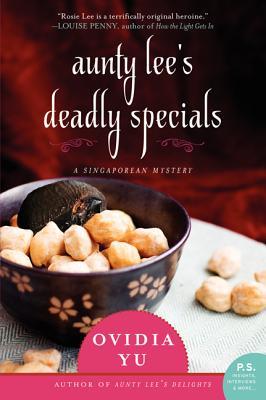 Rosie “Aunty” Lee, the feisty widow, amateur sleuth, and proprietor of Singapore’s best-loved home cooking restaurant, is back in another delectable, witty mystery involving scandal and murder among the city’s elite.
Few know more about what goes on in Singapore than Aunty Lee. When a scandal over illegal organ donation involving prominent citizens makes news, she already has a list of suspects. There’s no time to snoop, though—Aunty Lee’s Delights is catering a brunch for local socialites Henry and Mabel Sung at their opulent house.
Rumor has it that the Sung’s fortune is in trouble, and Aunty Lee wonders if the gossip is true. But soon after arriving at the Sung’s house, her curiosity turns to suspicion. Why is a storage house she discovers locked? What is the couple arguing about behind closed doors? Where is the guest of honor who never showed up?
Then, Mabel Sung and her son Leonard are found dead. The authorities blame it on Aunty Lee’s special stewed chicken with buah keluak, a local black nut that can be poisonous if cooked improperly. Aunty Lee has never carelessly prepared a dish. She’s certain the deaths are murder—and that they’re somehow linked to the organ donor scandal.
To save her business and her reputation, she’s got to prove it—and unmask a dangerous killer whose next victim may just be Aunty Lee.

For a book that uncovers a very serious topic, Aunty Lee’s Deadly Specials still retains its feel as a cozy mystery. While so much of the trouble revolves around Aunty Lee’s catering business, the case she finds herself in the middle of deals with the very dark side of compensated organ donations and medical tourism.

A lot of the people involved in this case turn out to be really sick, and they didn’t get that way from eating Aunty Lee’s cooking – not that they don’t try to blame the whole thing on her and her catering. Aunty Lee would probably have involved herself anyway – she does that for fun – but attacking her catering business closes out her one method of dealing with loneliness and widowhood – by fixing other people food and fixing other people’s problems. 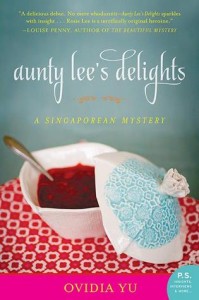 (Word to the wise – just as in the first book in the series, Aunty Lee’s Delights, Aunty Lee cooks a lot, and it all sounds exotic and positively yummy. Even the things that may seem very strange to us, like fried anchovies. Do not read this book when you are hungry – you will find yourself spontaneously raiding your own kitchen, and possibly kitchens for several houses around!)

The story begins with Aunty Lee scouring the newspaper, and having her friend and companion Nina scouring the internet, for news of a suicide victim. A young woman came to Singapore to find her missing fiance, and commits suicide when neither he nor his body can be found. Her young man disappeared after agreeing to come to Singapore to donate a kidney. This type of organ donation for cash is strictly illegal in Singapore, but the young couple needed the money to get married. When he disappears, she is left bereft and pregnant.

While at the beginning Aunty Lee’s nose for trouble seems to be leading her to something unrelated to her own life, as usually happens the case quickly draws closer to home, even though the police and everyone else urge her to drop it – sometimes with threats.

Things start out simple. Aunty Lee caters a party for a family that seem to be movers and shakers in the Singapore upper crust. One of the fun things about Aunty Lee is that while she acts as if she is just a caterer and restaurant owner, she herself is actually a member of that upper crust. And as is often the case, the people who are looking down on her for working are really people that she could buy and sell several times over.

The house party falls apart fairly spectacularly. First a young man gatecrashes the party looking for his missing friend. Then two members of the family are found dead after eating one of Aunty Lee’s more famous dishes, a delight that is notorious for poisoning diners if the dish is not prepared properly. Of course, Aunty Lee always prepares everything properly.

But even as she is cleared of any possible involvement in what now looks like a murder-suicide, the family is still determined to drive her out of business so that she publicly takes the blame for the mess. It seems to Aunty Lee that the family is moving heaven, earth and their powerful social network, in order to suppress any attempt to search for the real killer.

And that’s where Aunty Lee steps in, up to her neck. Her honor is under threat. And she is all too aware that she will be prey to loneliness and depression without her business (and her need to look into everyone else’s business) to keep her occupied.

As they say, curiosity killed the cat. And if Aunty Lee isn’t careful, she might find herself in the same pickle.

Escape Rating B: At the beginning the case, or Aunty Lee’s involvement in it, seems more than a bit shambolic. There are too many suspects, many too many motives, and no clear path to zeroing in on a single one of either. Even Aunty Lee comments to herself, or to the portrait of her late husband that she regularly talks to, that she has all the elements of a case but they aren’t fitting together quite right. This recipe is missing a key ingredient.

Which she doesn’t find for about the first third of the story. At that point, things start making more sense and the pace picks up considerably. We’re still not there yet, but you can feel Aunty Lee closing in on a solution.

Aunty Lee sometimes plays herself for comic relief, pretending to be a confused little old lady when in fact she’s sharp as a tack and surprisingly spry for her age. As well as quite well off. And the police commissioner is an old and dear friend, which always helps when you insert yourself into murder investigations on a regular basis.

But the underlying story in Aunty Lee’s Deadly Specials is not funny at all. The world of compensated organ donation is ugly and brutal. While the results in this particular case are ultimately tragic, as well as deadly for too many people who didn’t even know they were on the fringe of this dirty business, the problems that are exposed are dire and have no good solutions. The needs of people who will do almost anything in hopes of a better life are easily exploited by those who have enough money to circumvent the rules. And because it all operates under the table, it becomes a criminal enterprise where even the innocent are at risk.

That part of the case leaves the reader, and Aunty Lee, with no good answers. Only hard questions.