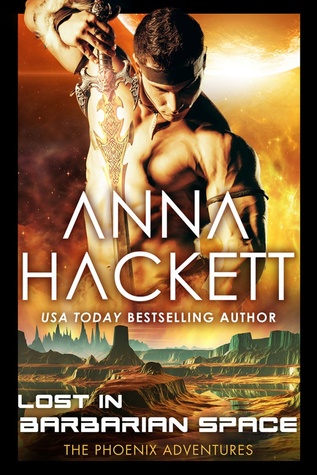 Agent Honor Brandall enjoys her job as security agent for the Institute of Historical Preservation's expedition ships. Adventures to distant planets - awesome. Archeological digs for ancient old Earth artifacts - interesting. Keeping the archeologists safe - no problem. The fact she's tall, strong and good in a fight means most of the men she works with are intimidated by her, but she refuses to apologize for being good at her job. But on a mission to the barbarian world of Markaria, she finds herself paired with a brawny warrior who challenges her in every way.

Markarian warrior Colm Mal Kor is second-in-command to his warlord and spends his days training to hone his skills and control. He's dedicated to defending his clan...and to hiding the deadly secret he can never share with anyone. But when he's thrust into working with a beautiful, challenging skyflyer, Colm finds a wild attraction he never expected and the biggest risk to his hard-earned control that he's ever encountered.

On an expedition to Markaria's icy moons, Honor and Colm work side by side, but the ice and snow aren't enough to stop them from wanting each other. As their mission takes a deadly turn, they must trust each other to survive, but it isn't just wild beasts and ferocious enemies that are a danger... Colm is harboring something inside him that is far more lethal...something that might destroy them all. 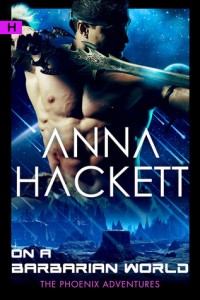 When I reviewed On a Barbarian World last year, I sadly thought that it might be the last of the Phoenix Adventures. I’m so happy I was WRONG!

Lost in Barbarian Space has its roots in two of the earlier Phoenix Adventures. Niklas Phoenix and Nera Darc are now leading the Galactic Historical Institute. How they reached that position, and how they finally fell for each other, is told in the absolutely awesome Return to Dark Earth.

The “barbarian space” that this new book is lost in, is the space discovered by Niklas cousin Aurina in On a Barbarian World. We get to explore that world a lot more in this book. There are more ships available than Aurina had, and only one of them manages to make a crash landing this time.

But Niklas, Nera and Aurina are only side characters this time around. Instead, our protagonists are the security officers for the two sides of this equation. Honor Brandell is Nera Darc’s second-in-command for the Institute’s security. And Colm Mal Kor is Kavon’s right-hand-man. (Kavon was the hero in On a Barbarian World).

There is a pattern to the entries in this series. The hero and heroine always start out in a position where they can’t possibly have a future together. Niklas and Nera were always competing for the same artifacts. Aurina was an interstellar scout, and Kavon was a barbarian war leader tied to his people and his planet. Justyn and Nissa (Beyond Galaxy’s Edge) start out on opposite sides of the law.

In the case of Lost in Barbarian Space, there are a whole shipload of reasons why Honor and Colm don’t believe they could have a future together.

Honor is a warrior. She prefers to protect rather than to kill, which is why she isn’t in the Galactic Security Service, but she is still a warrior and a damn good one. Colm’s people don’t believe that women are physically suited to be warriors. They can and often are anything and everything else, it’s not that the society is that backwards. But their men are generally many times stronger than their women, and it makes them more effective warriors.

Honor is from what sounds like a heavy-world, which makes her name even more appropriate. She may not be as strong as one of the nanami-enhanced warriors of Markaria, but she is much closer than anyone believes.

However, that strength has meant that there have been too many men in her past who want a one-night stand with someone who is a bit different, but can’t accept her differences for the long haul. As much as she is attracted to Colm, he all too frequently sounds like just another guy who wants a bit, but not too much, strange for a night.

Colm has a different problem with having more with Honor than a one-night stand than anyone is aware of. His nanami, the enhanced nanites that give his people their strength, their enhanced senses, and their remarkable healing ability, are going out of control, just like his father’s did. In other words, Colm is going incurably and violently nuts. This is a relatively rare but well-documented condition among the Markarians, and there is no cure.

So Colm doesn’t want to get emotionally involved because he’s afraid that he will either abuse her, as his father did both him and his mother or that he will have to leave to go die alone in the wilderness. Or both.

Escape Rating A-: Like all of the books in the Phoenix Adventures series, Lost in a Barbarian World had a satisfying ending and still left me wanting more. I love the novellas in this series, but I always finish them thinking that I just didn’t get to spend enough time in this marvelous world.

At least this time, when I finished the book I saw that there is at least one more book in the series, tentatively titled Through Uncharted Space. This is a journey that I will be sad to see end, so I hope it doesn’t for a good while yet.

About this story — one of the things I liked best about it was the character of Honor. She’s a strong woman without being a stereotypical “strong female character”. While she knows that she is who she is meant to be, she’s also taken some hard emotional knocks for the things that make her different. And while those knocks don’t make her change who she is, they do hurt and she gets emotionally scarred by some of that hurt.

I also love that she rescues herself. There is a scene fairly early on when the bad guys (space pirates!) attempt to kidnap her. Colm rides to the rescue. Just as I was moaning about looking like the author fell into the stereotype of putting the woman in jeopardy, Colm catches up to the bad guy only to discover that Honor has already dispatched the bastard. Talk about turning the trope on its head! (Then pulling the head off and spitting in the bloody stump – not literally but certainly figuratively)

One of the things I did not love about On a Barbarian World is the way that Aurina completely gives up her life as a scout to stay on Markaria with Kavon. It was the only way a happy ending could work in that story, but I didn’t like the fall into the expected, where the woman gives up her life and becomes even semi-domesticated.

That doesn’t happen in Lost in Barbarian Space, and it makes the ending that much sweeter.

2 thoughts on “Review: Lost in Barbarian Space by Anna Hackett”