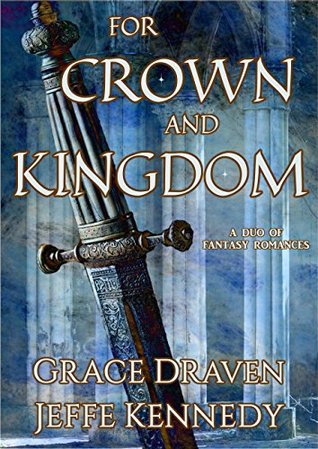 ***The Crown of the Queen: a novella of the Twelve Kingdoms by Jeffe Kennedy

It's been a lifetime since librarian Dafne Mailloux saw the coronation of the tyrant who destroyed her family. She did her part to pull him off the High Throne. But his daughter, the would-be Queen, and her sisters must still tame their conquest. If her victory is to last, Dafne must forge peace with the subtle, ruthless methods of a diplomat--and the worst memories of her life...

***The Undying King by Grace Draven

The stories are told in whispers, even after so long: of a man whose fair rule soured when he attained eternal youth. Imprisoned by a sorceress wife in a city out of time and place, he has passed into legend. Few believe in him, and fewer would set their hopes on his mercy. But Imogen has no choice. To break the curse that's isolated her since birth, she'll find the Undying King--and answer his secrets with her own...

For Crown and Kingdom is a duology, two separate works of fantasy romance. I read the first entry in the pair, The Crown of the Queen, not long ago, and absolutely loved it. Last night, I read The Undying King by Grace Draven, and loved it almost as much. This is the first time I’ve read something by this author, and now I understand why my friends at The Book Pushers love her Master of Crows so much.

Someday, when my virtual TBR pile isn’t virtually toppling over, I have to read Master of Crows. 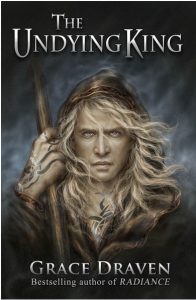 But in the meantime, I have this little treat of a story in The Undying King.

The story has the feeling of being inside a myth. If fiction is the lie that tells the truth, this story feels like one of those truths that exists back in the mists of time. Even though there is no fairy tale of Cededa the Fair and the lost city of Tineroth, there should be. It feels true.

And it feels true because it does an excellent job of combining elements that we know, things that feel true because even though these specific incidents might not have happened, they echo things that do.

Imogen is a young woman with a death curse. It’s not that she herself is cursed to die, no more than any more than any other mortal, but she is cursed that every person she touches dies instantly. This has nothing to do with intent, or at least not her intent. The curse is part of her blood and bone.

The first time she touches a person without gloves, it is to bring her adoptive mother the release of death, after a long, painful and debilitating illness. Niamh can’t be saved, she can only be given the mercy that shortens her last few hours of agony.

But she leaves Imogen alone, and with the burden of a promise. To read her diary, take the magic key found within, and make her way to the lost city of Tineroth. In fabled Tineroth the Undying King haunts and protects his crumbling city. And Cededa is a much-practiced (4,000 years gives one a lot of time to practice!) sorcerer who should be able to remove Imogen’s curse.

4,000 years of loneliness and endless existence have burned the anger and cruelty out of Cededa the Butcher, as he was once known. With nothing but time to reflect on his past deeds, the man who once slaughtered cities beyond counting has nothing left but regret, remorse and the wish for an end. He has become again what he was in the beginning, Cededa the Fair, the handsomest man that many, including especially Imogen, have ever seen.

When Imogen reaches him after a magical journey, he bargains with her for the one thing no one else has ever been able to give him. In return for removing her curse, Cededa asks Imogen for four months of her company in his living ghost town.

He seeks companionship. She hopes for the ability to live a normal life. Instead, they find that her curse matches his mistaken burden every bit as well as they match each other. Until the world intrudes, and steals her away from the life and the man she has come to love.

The Undying King is a beautiful love story, while it explores themes that resonate long after the book is done.

It is a coming of age story. Imogen is relatively young, and certainly somewhat innocent, at the beginning of the story. She is also intelligent and well-taught, but she has no experience with relationships of any kind. Her adoptive mother Niamh is the only person she speaks with, for fear that someone will accidentally touch her and die.

Her mother and mentor sends her on a quest, to return the key that Cededa gave her long ago, and to find a cure for her curse. Her journey is both magically begun and magically eased – the key makes her path sure and short, and creates a bridge for her where none exists.

Tineroth and Cededa have faded into the mists of legend. Even the stories are fading. His is the story of the ring that came with a curse. He wanted immortality, and he found it. But that gift binds him to the place that gave it to him. He cannot leave, and no one can find him. His loneliness is absolute, along with his regrets.

Imogen and Cededa are equal and opposite. She kills with a touch, and he can never die. Separately, they live in complete isolation. But together, her curse brings him just enough mortality for him to feel life again. And his resistance to her curse makes him the one person she can touch whenever and however she likes.

Their love seems almost preordained. But there is always a snake in the garden. In this case, it is Imogen’s unknown past that drives them apart. Because of course Imogen is a lost princess, and that makes her a pawn.

When she makes herself a queen, the ending is glorious. 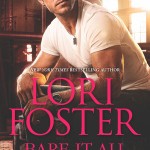 Review: Bare It All by Lori Foster 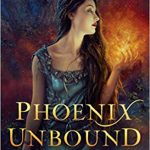 5 thoughts on “Review: For Crown and Kingdom by Grace Draven and Jeffe Kennedy”