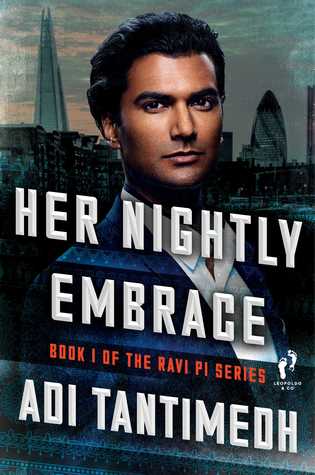 The first in a trilogy of whip-smart novels—currently in development as a TV series set to star Sendhil Ramamurthy (NBC’s Heroes and Heroes Reborn)—about a destructive private investigator and his eccentric coworkers, who handle cases so high-profile that they never make the headlines.
Ravi Chandra Singh is the last guy you’d expect to become a private detective. A failed religious scholar, he now works for Golden Sentinels, an upmarket London private investigations agency. His colleagues are a band of gleefully amoral and brilliant screw-ups: Ken and Clive, a pair of brutal ex-cops who are also a gay couple; Mark Chapman, a burned-out stoner hiding a great mind; Marcie Holder, a cheerful former publicist; Benjamin Lee, a techie prankster from South London; David Okri, an ambitious lawyer from a well-connected Nigerian immigrant family; and Olivia Wong, an upper-class Hong Kong financial analyst hiding her true skills as one of the most dangerous hackers in the world—all under the watchful eye of Roger Golden, wheeler-dealer extraordinaire, and his mysterious office manager, Cheryl Hughes.
Thrust into a world where the rich, famous, and powerful hire him to solve their problems and wash their dirty laundry, Ravi finds himself in over his head with increasingly gonzo and complex cases – and the recent visions that he’s been having of Hindu gods aren’t helping. As Ravi struggles to stay ahead of danger, he wonders if the things he’s seeing are a delusion – or if he might, in fact, be an unrecognized shaman of the modern world...

As I read Her Nightly Embrace, it felt a lot like I was reading a media tie-in book for a TV series. While there is somewhat of an overarching story, the book is divided into sections that read an awful lot like separate episodes.

Which is completely fitting, as the series is in the process of being adapted for TV, and seems to have been written with that adaptation in mind. Which does not keep the book from being a fun and interesting read.

The cast of characters inhabiting the Golden Sentinels Private Investigations Agency is one of the quirkiest bunch of misfits ever to become private investigators. And Ravi Chandra Singh fits right in – even if he doesn’t believe that he does.

Everyone at the agency, from the owner on down, is on the run from something or other. Not literally on the run, but metaphorically. Ravi is as down on his luck, at least for certain definitions of luck, as the rest of them.

He’s a failed religious scholar, and a recently fired schoolteacher. Neither of which makes him terribly employable in most circles. But he is in debt up to his eyeballs to pay for his sister’s fancy wedding and his mother’s gambling debts, so he tells himself he’s just working at the extremely well-paying and equally morally questionable Golden Sentinels to pay off his overdraft.

It takes a long time, and more than a few cases that head towards Crazytown, before he’s able to admit to himself that he’s as addicted to the chaos as the rest of the shop of misfit toys.

But he is in over his head. Golden Sentinels is the agency that very, very rich people, and occasionally governments, hire when they want to make sure that their problems go so far away that no one ever knows they existed in the first place.

They say that God laughs at our plans. For Ravi, that is literally true. He sees the Hindu gods in the midst of his chaotic life, and they are all laughing at him. And seemingly texting each other about him and what they perceive as his foolishness.

Is Ravi crazy, or are the gods really watching him? He doesn’t know, and neither do we. But if they are, he is giving them a very entertaining show.

Escape Rating B: This is a fun book. There’s not a lot of there, there, but it makes for a very entertaining read.

Her Nightly Embrace reads like a caper story, or actually a collection of them. It reminds me a bit of the TV show Leverage, in that you are never quite sure whether the Golden Sentinels are black hats or white hats, and often neither are they. But they solve their cases with a lot of expensive toys, a bit of sleight of hand, and a willingness to do just about anything to take care of their well-paying clients.

Including the CIA. When Ravi finds out exactly who the Golden Sentinels are in bed with, it sends him on a long, dark night of the soul. He’s still a bit out there through the rest of the book.

Her Nightly Embrace is a story of the loss of innocence. It’s one of those stories about someone not wanting to see how the sausage is made, only to find out in the end that he is the sausage – and so is everyone else.

Ravi’s work is so crazy that he needs his family to ground him. Which they do, and at the same time his parents and his sister are also part of the crazy that drives him. When the agency recruits his on-again/off-again girlfriend, the reader isn’t sure whether it’s because her talents are useful or because it gives them another way of tying Ravi to the agency. And after meeting all the characters, it’s probably a bit of both.

Although their methods can be fairly dark, like Leverage the book does come off as entertaining fluff. Maybe dark velvet fluff, but fluff nevertheless. I am curious to see where the series, both the books and the TV series, take Ravi and the Golden Sentinels next.