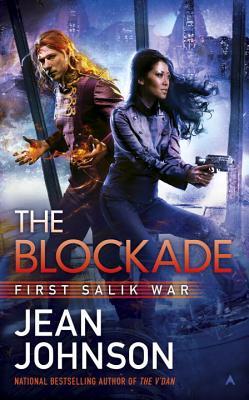 The national bestselling author of The V’Dan returns to her gripping military sci-fi series set in the same world as Theirs Not to Reason Why. The First Salik War is underway, and the Alliance is losing—their newest allies must find a way to win, or everyone will be slaughtered.  Though committed to helping their V’Dan cousins, the Terrans resent how their allies treat them. The V’Dan in turn feel the Terrans are too unseasoned to act independently. And the other nations fear that ending the Salik War means starting a Human Civil War.   Even as Imperial Prince Li’eth and Ambassador Jackie MacKenzie struggle to get their peoples to cooperate, they still face an ethical dilemma: How do you stop a ruthless, advanced nation from attacking again and again without slaughtering them in turn? 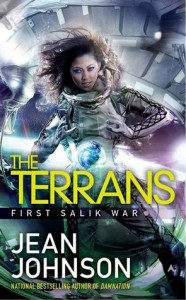 I started reading The Blockade almost as soon as I received the eARC. I absolutely adored the first book in the series, The Terrans, and mostly liked the second book, The V’Dan. The V’Dan ended on a terrible cliffhanger, and I just couldn’t wait to find out how the story ended. Especially as this entire series is a prequel to one of my all -time favorite series, Theirs Not to Reason Why.

So I had a lot invested coming into this book. And I inhaled it in about a day. Weekends are wonderful for spending LOTS of time curled up with a good book.

However, while I got very, very caught up in my visit to the First Salik War, I found the book just a bit anti-climactic. And I’m feeling a bit sad about that.

The story begins with that horrid cliffie from the end of The V’Dan. Li’eth and Jackie have been separated through an act of supreme skullduggery (not to mention overwhelming idiocy) on the part of his sister, the Crown Princess Vi’alla. This separation isn’t just a romantic problem, it’s a separation that is going to kill them both if it goes on too long. The elasticity of that “too long” hasn’t been researched much, because the problems are just too great.

If any of the above makes you think that you should read this series in order, you are correct. This universe is a marvelous creation, but there are only two starting points. Either start with The Terrans, or start with A Soldier’s Duty, the first book in Theirs Not to Reason Why. There are valid arguments for starting in either place. The First Salik War takes place a century or so before the events in A Soldier’s Duty, but Duty was written first. 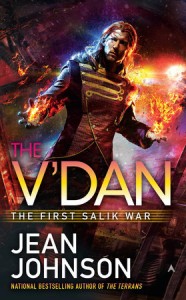 As established in The Terrans and The V’Dan, our heroes are a gestalt pair – they are bonded at the psychic level. While this was not intentional, more like an act of whatever gods one cares to blame, it is a fact in this universe. Gestalt pairs who are separated die.

So Li’eth’s sister has sentenced both her brother and the Terran ambassador to death at the end of The V’Dan. Fortunately for all concerned, her mother the Empress turns out to be not as wounded as Vi’alla wanted to believe at the end of that book, and takes control back over in relatively short order at the beginning of this story, which does not begin to undo the damage that Vi’alla has done to Terran-V’Dan relations or to her own family.

The resolution of that particular thread of the story is explosive – but it felt like it occurred much too early in the book to maintain needed dramatic tension. To this reader, it felt like everything after that point was mop-up. Very important mop-up, but mop-up nevertheless.

Escape Rating B+: I did swallow The Blockade pretty much whole, which is what gets me to that B+ rating. I like these people, especially Ambassador Jackie MacKenzie, and was rooting for them every step of the way.

In my review of The V’Dan over at The Book Pushers, I said that I would finish this series just to read more of Jackie’s adventures, and that is pretty much what happened. I had to see how things turned out for her, and I definitely wanted her to find a way to her own happy ever after. She earned it.

This story has a moral dilemma at its center. The Salik have to be stopped. They don’t just want to conquer the V’Dan and the Terrans, they want to eat them. For dinner. Or any other meal. The truly nasty thing about the Salik is that they prefer intelligent prey, and want that prey to be alive, kicking and watching as long as possible as their parts are eaten. There’s no way not to reflexively shiver at the very thought.

But there has to be an answer. They can’t be left to roam the galaxy searching for lunch – because their lunch has the same right to exist as they do. At the same time, the Salik are an intelligent race themselves. They might evolve past their current predatory pattern if they have enough time to learn the error of their ways. Genocide is not the right answer, although it often feels like it might be the expedient answer. The core dilemma that drives the end of the book is how to contain the Salik without destroying them. 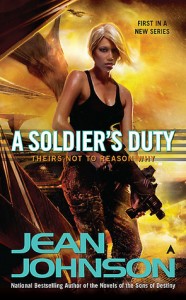 Not just because genocide is wrong, but because we have already seen the future, and the damned frogtopi are going to be needed. And if that statement intrigues you, and you haven’t yet read A Soldier’s Duty, start now!

The publisher is letting me give away a copy of The Blockade to one lucky US/CAN commenter. 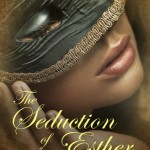 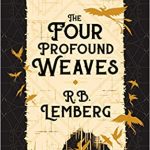 6 thoughts on “Review: The Blockade by Jean Johnson + Giveaway”