Please help me welcome Maisey Yates to Reading Reality! I absolutely adored Maisey’s Last Chance Rebel, and my friend Amy gushed equally over Hold Me, Cowboy, so I’m thrilled to host Maisey for this stop of the Winter Holiday Recipes + Reads Giveaway. Her pumpkin pie recipe looks every bit as yummy as her books. And that baking inspired prize pack looks like a ton of decadently delicious fun – even if you do have to do the baking yourself.

Pumpkin Pie is more readily associated with Thanksgiving than Christmas, I suppose, but growing up it was my brother’s favorite. So starting in early November (his birthday) and moving through Christmas, Pumpkin Pie was something my mom made a lot of. And I’ll tell you, it is the best pumpkin pie out there. 

Yes, the crust is key. And you know what else is important? Extra cinnamon! Read on for the recipe! (This recipe makes two pies)

The ingredients to the crust are simple, but following the steps is what gets you flaky crust and not chewy crust.

Mix (press with fork) together until crumbly

Heat oven to 425°F. With floured rolling pin, roll both rounds into round 2 inches larger than upside-down 9-inch glass pie plate. Fold pastry into fourths; place in pie plate. Unfold and ease into plate, pressing firmly against bottom and side. 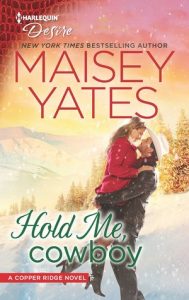 About Hold Me, Cowboy

Oil and water have nothing on Sam McCormack and Madison West. The wealthy rancher has never met a haughtier—or more appealing—woman in his life. And when they’re snowed in, he’s forced to admit this ice queen can scorch him with one touch…

Madison had plans for the weekend! Instead she’s stranded with a man who drives her wild. A night of no-strings fun leaves both of them wanting more when they return to Copper Ridge. His proposal: twelve days of hot sex before Christmas! But will it ever be enough?