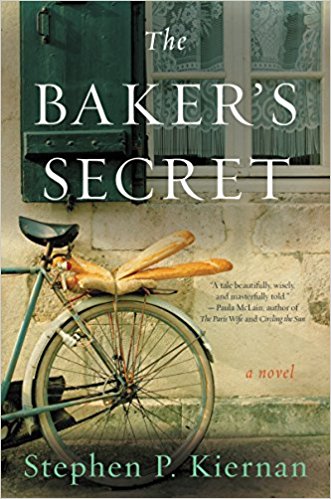 From the critically acclaimed author of The Hummingbird and The Curiosity comes a dazzling novel of World War II—a shimmering tale of courage, determination, optimism, and the resilience of the human spirit, set in a small Normandy village on the eve of D-Day
On June 5, 1944, as dawn rises over a small town on the Normandy coast of France, Emmanuelle is making the bread that has sustained her fellow villagers in the dark days since the Germans invaded her country.
Only twenty-two, Emma learned to bake at the side of a master, Ezra Kuchen, the village baker since before she was born. Apprenticed to Ezra at thirteen, Emma watched with shame and anger as her kind mentor was forced to wear the six-pointed yellow star on his clothing. She was likewise powerless to help when they pulled Ezra from his shop at gunpoint, the first of many villagers stolen away and never seen again.
But in the years that her sleepy coastal village has suffered under the enemy, Emma has silently, stealthily fought back. Each day, she receives an extra ration of flour to bake a dozen baguettes for the occupying troops. And each day, she mixes that precious flour with ground straw to create enough dough for two extra loaves—contraband bread she shares with the hungry villagers. Under the cold, watchful eyes of armed soldiers, she builds a clandestine network of barter and trade that she and the villagers use to thwart their occupiers.
But her gift to the village is more than these few crusty loaves. Emma gives the people a taste of hope—the faith that one day the Allies will arrive to save them.

The Baker’s Secret might have been more descriptively titled as Emma’s War. Or perhaps Resistance is not Futile, or even How to Resist without Joining the Resistance. Or simply, Survival.

Because the story encompasses all of those things, and more.

From first to last, this is Emma’s story. And it is the story of the frog who dies by degrees as his cool pan of water heats up and boils. But unlike that proverbial frog, neither Emma nor her coastal French village actually die during the German Occupation, although they often wish they had. And all too many individual citizens actually do die, whether directly for German atrocities or less directly by being conscripted or simply by being unable or unwilling to drudge through another day.

Emma is the town baker. She has a gift for baking, and that gift is both blessing and curse. It is because of that gift that the occupying Germans discovered her tiny village. And it is that gift which keeps her relatively safe. The Kommandant doesn’t want his baker unduly harassed, or raped, and certainly not killed, without good reason. For admittedly select values of reason.

He wants his morning bread, and for that reason, gives Emma enough of a flour ration to bake a dozen loaves for himself and his officers.

That bread makes Emma the center of a ring of resistance. Not THE Resistance, but a resistance. Emma manages to make those dozen loaves into 14, with just a bit of subterfuge. And with those two extra loaves, she has something to trade. Because everyone wants just a little bit of solace in what are very dark times. So she has her circle of bread for eggs for tobacco for oil for fish for bread. Around and around the village she goes, keeping everyone, if not well fed, at least alive for the duration.

Because Emma brings not only food, but just a tiny bit of hope. Which is ironic, because Emma has none of her own. While everyone around her is certain, to varying degrees of informed certainty, that the Allies will come to rescue them, Emma is not. She hates the occupying army, but also believes that no one will come. Survival is all they have.

Until June 6, 1944, when the Allies storm the nearby beaches. And bring a hell on earth to everyone left in their way.

Escape Rating A-: The Baker’s Secret is a quiet book, and with good reason. For most of the occupation, life goes on, however badly. Emma’s days acquire a dull, unending sameness, only broken by incidents of brutality or audacity, either the Nazis’ brutality or her own audacity. She lives because the village depends on her, and in turn, she helps keep them alive.

We see the village in all its sadness. Too many are gone. Too many have been murdered out of brutality or caprice. And, although it is just a few, too many who have decided, like Emma, that the occupation is forever have also determined that the best way to survive is to capitulate, to cooperate, to collaborate with the enemy.

Emma’s story is about the courage of the small things in the face of the large disaster. She can’t kill all the Nazis, but she can hide a pig from them, getting meat into everyone’s pot for at least a month. She can’t stop baking, but she can stretch the ration by adding straw. It’s a life of tiny but important defiance.

What makes this a hard book is the description of the Nazis’ brutal treatment of the village and its inhabitants. There is no individual evil at work in the village (Hitler may be both individual and evil, but he is not personally present in the village), but there is great evil nevertheless. The way that the Nazis are portrayed in this story feels like a meditation on the saying about power corrupting and absolute power corrupting absolutely. These young men, and they are mostly very young, however kind and gentle they might be to their families or their fellow countrymen, have decided to swallow the big lie that non-Germans are lesser forms of humans, and that some people, notably Jews and other minorities, are not human at all. And have chosen to use that power and that license not merely by following orders, but to seemingly go out of their way to grind every person down and then punish them both for being ground down and for resisting the grinding.

It does not make for easy reading, but it does make the reader think. It seems to have been so easy to reduce these young soldiers to brutal and brutish beasts. All that was necessary was to drum into them that everyone was less human than themselves. Once non-Germans were made into “the other”, any strike against them could be justified.

I want to say that Emma stands tall in the face of adversity, but she doesn’t. Instead, her posture is always bent over and straining forwards, pulling her cart of burdens behind her like a train. She resisted by hiding in plain sight. I also can’t say that she gets a happy ending, because when we leave Emma in June of 1944, the war is still going on, even if the front has moved until her village is behind it on the Allies side.

But chocolate does indeed sometimes taste like hope. And I hope that readers who loved The Chilbury Ladies Choir and The Guernsey Literary and Potato Peel Pie Society will make a place in their hearts (and in their TBR stacks) for The Baker’s Secret.

3 thoughts on “Review: The Baker’s Secret by Stephen P Kiernan”