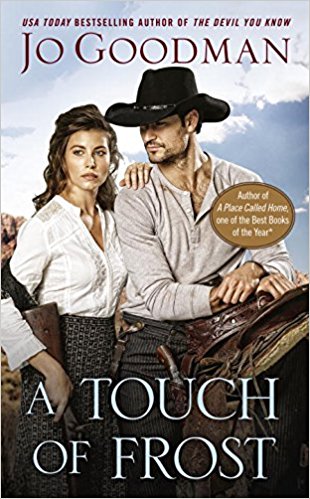 USA Today bestselling author Jo Goodman presents a "sprawling, lusty recreation of life, love, and slowly uncovered secrets*" as a rancher rescues a mysterious young woman with trouble of her trail.
RESCUE ME
After his train is robbed at gunpoint, Remington Frost awakens from a blow to find the bandits gone...along with the woman he was shadowing for protection. No stranger to risk, Remington will do what it takes to bring Phoebe Apple to safety and her kidnappers to justice. But ransoming Phoebe is just the start of trouble...
Phoebe is shocked to learn that her mysterious rescuer is none other than Remington Frost, the son of her sister's new husband. Home at Twin Star Ranch, she falls happily into western life--and cautiously in love with Remington. But danger hides close to home, and their romance illuminates a web of secrets and betrayal that may put the rancher and his intended bride past the point of rescue.
*Publisher's Weekly

A Touch of Frost turned out to be how I spent one day of my weekend. It was a good day. 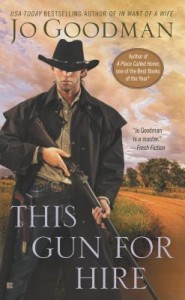 I like Jo Goodman’s historical western romances quite a bit. If you haven’t indulged, This Gun for Hire is every bit as good as everyone said it was. Possibly even better.

What makes her romances so special, and so very interesting, are the characters. Both the hero and the heroine are unconventional in one way or another, and the way that they work together carries the story, usually on a wave of intelligent banter. As is true in A Touch of Frost.

The story begins with Phoebe Apple’s kidnapping. Just when she starts to think that all of the dime novel desperadoes that she’s been reading about are purely fictional, her train is stopped by a masked gang who rob the passengers and take her hostage.

At first it seems as if her kidnapping was just bad luck, but the more that the gang talks among themselves, the more it seems as if her kidnapping was the entire purpose of the expedition, and that any petty thievery that took place was mostly window-dressing. But Phoebe doesn’t believe that anyone would bother ransoming her. Her sister may be the new wife of a wealthy landowner, but Fiona Apple has no money of her own, and as far as Phoebe knows there’s no reason why Fiona’s husband would pay good money to ransom his sister-in-law.

It’s pretty clear that Phoebe knows nothing about the way that things really work out west. She has no idea that her new brother-in-law, Thaddeus Frost, set his son Remington on her trail, to guard her until she arrived safely at the Frost ranch. And it’s a good thing that he did.

While Remington is rather ignominiously laid low during the actual robbery, he’s pretty quick to recover after the fact and set out in search of Phoebe and her kidnappers. Phoebe, who may be a bit uninformed but is certainly smart as well as brave, has left a trail of discarded items to serve as breadcrumbs for any potential rescuer.

From their very first meeting, Remington and Phoebe strike sparks off of each other. In spite of the pretty awful circumstances, Remington finds Phoebe game to continue with any plan he hatches, and he gets them out of her current mess and safely home while others pursue the gang. A gang that successfully eludes pursuit and makes off with the $2,000 ransom that Thaddeus willingly paid. Back when $2,000 was very definitely real money.

Money that he doesn’t even want back, now that Phoebe is safe.

And that’s where the story really begins. Because Thaddeus is very much afraid that his new wife arranged the kidnapping – not because she wishes her sister any harm, but because she desperately wants enough money to leave him and go back to the bright lights and big city of New York, where she was a very successful actress.

He just wants to make Fiona want to stay, and has zero idea of how to go about it – which is why he sent for Phoebe. Phoebe, on that other hand, knows all of Fiona’s little tricks, because she’s been the victim of most of them. They may love each other, but Fiona’s many, many, many insecurities mean that she can’t resist scoring off of Phoebe at every single turn.

But her kidnappers are still out there, and now they’ve upped their game to murder. It becomes a question of whose luck will run out first, Phoebe’s or her kidnappers.

Escape Rating B: I had a lot of fun with this book because every scene between Phoebe and Remington absolutely sparkles with wit and humor. Their romance proceeds at a fast and fun clip from their shaky meeting until they fall into each other’s arms. There isn’t a lot of pretense between them, and that’s wonderful to see in a romance. They are each simply themselves, and their personalities just work together. Also, this is very definitely a romance of equals, something that is difficult to both successfully and reasonably pull off in a historical romance.

It was also great that whatever the conflicts are in the story, and there are plenty of them, not a one of those conflicts requires a misunderstandammit between the hero and heroine. There are a lot of times when Remington wishes that he didn’t have to tell Phoebe the gory details of what’s going on, but he knows that he has to for their relationship to work. So he does it, and with very little prevarication at that.

But there are plenty of secrets in the story just the same. There’s an entire herd of drama llamas camped on the field between Thaddeus and Fiona. They do love each other, but they are not talking to each other, at least not about anything that really matters. There’s a huge subplot between them that can be summed up as “assume makes an ass out of u and me”.

Starting with Fiona assuming that Thaddeus had a long-running affair with his housekeeper after the death of his wife, and that said affair was still going on up until he met Fiona, if not longer. That said housekeeper is in love with Thaddeus makes the whole thing believable, and that Thaddeus has been oblivious to the woman’s feelings for 20-something years just adds to the confusion.

But the big mystery in this story is all about the kidnapping, and the subsequent murders. As much as I enjoyed the interplay between Phoebe and Remington, the case felt like it took a bit too long to finally unravel. Although I knew Fiona wasn’t behind it, finding out who was, why, and how, seemed awfully slow to come together. I reached a point where I just wanted them to wrap it up already.

And as much as I loved Phoebe, Fiona is an extremely unlikable character from beginning to end. It’s a good thing that Phoebe loves her, because I certainly did not. I found her cruel and manipulative, and while I knew she wasn’t the mover and shaker behind events, I wouldn’t have minded a bit if she were.

But I was very glad at the end that I got to see Phoebe and Remington’s happy ending. They earned it! 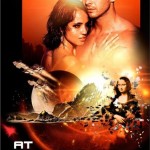 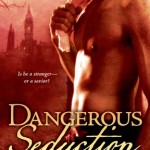