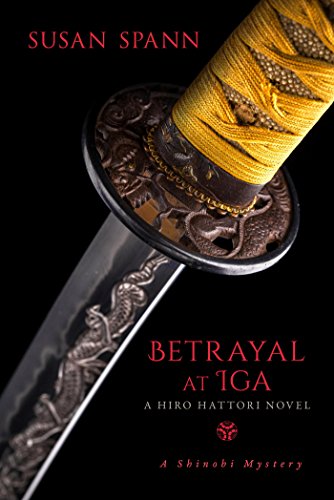 Autumn, 1565: After fleeing Kyoto, master ninja Hiro Hattori and Portuguese Jesuit Father Mateo take refuge with Hiro s ninja clan in the mountains of Iga province. But when an ambassador from the rival Koga clan is murdered during peace negotiations, Hiro and Father Mateo must find the killer in time to prevent a war between the ninja clans. With every suspect a trained assassin, and the evidence incriminating not only Hiro s commander, the infamous ninja Hattori Hanzo, but also Hiro s mother and his former lover, the detectives must struggle to find the truth in a village where deceit is a cultivated art. As tensions rise, the killer strikes again, and Hiro finds himself forced to choose between his family and his honor." 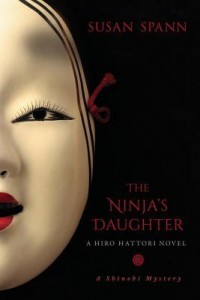 From the very beginning of this series, all the way back in the marvelous Claws of the Cat, I have been itching for the story of the first meeting between Hiro Hattori and Father Mateo. And while I didn’t get it in Betrayal at Iga, the story does get a lot closer to the source of their partnership, that old contract between Mateo’s secret (presumably) benefactor and Hiro’s shinobi (read as ninja) clan.

Someone, somewhere, still unknown, was willing to pay a lot of money to contract with one of the two greatest shinobi clans to keep the Portuguese missionary alive. That contract has saved Mateo’s life over and over again, even as it has endangered Hiro’s, generally at the same time. In Betrayal at Iga, Hiro has been forced to bring Mateo to the seat of his clan’s power, in order to keep him alive after the tumultuous events of The Ninja’s Daughter.

(If you are getting the hint that this series is best read in order, that is one of the correct things to glean from the above. Also, the whole series is just damn excellent, so if you like historical mysteries, the whole thing is well worth reading. Period. Exclamation Point.)

The stakes are higher than ever in this fifth book in the series. Hiro and Father Mateo have arrived at Hiro’s home just in time for negotiations of an alliance between Hiro’s clan and the rival Koga clan. The clans are not currently at war, but not exactly at peace, either. Rivals seldom are.

Both feel as if peace is being forced on them from outside. Shinobi are always outsiders, samurai who are not acknowledged as samurai, trained in the shadow arts of espionage and assassination. Most shoguns hire them at need and otherwise leave them alone. But in the current political upheaval, both clans are all too aware that the new shogun, brought to power in a bloodbath, seeks to control all not currently under his sway. The shinobi clans’ independence is at stake, as is their livelihood and their very lives. Only by banding together will they be strong enough to resist the shogun’s iron fist.

But the negotiations are threatened from within. In the opening moments of the welcome feast, just as Hiro and Mateo arrive at Hiro’s childhood home, one of the rival negotiators dies of obvious poison in front of the entire assembled clan. In a household consisting entirely of assassins and practiced poisoners, every single person in attendance knows the result of poisoning when they see it spew in front of them.

In order for the negotiations to continue, someone must pay for the all-too-obvious crime. If the real killer is not found, the person who pays with their life will be the one who prepared the feast, even though the poison could not possibly have been contained within. That person is Hiro’s mother Midori, and Hiro can’t let her die, no matter how willing she might be to sacrifice herself to save the family’s honor.

It is up to Hiro and Father Mateo to find the real murderer, and the true motive for the murder, before his mother is forced to ritually kill herself. And before someone gets away with murder. But in a household of assassins, everyone is more than capable of the crime. Hiro has many too many suspects, and time is running out.

Escape Rating A: The best detectives are often outsiders. And in all of their previous cases, Hiro and Mateo have definitely been outsiders, Mateo by culture and Hiro by profession. But every once in awhile, it can be illuminating for the detective in a series to find himself all too much on the inside of a crime that he is investigating, where he already knows all the players and has previously formed opinions of the possible suspects. That is certainly the case in Betrayal at Iga, where Hiro is back at home, and the most likely suspects seem to be his mother, his grandmother, his cousin and his former lover. He comes home and into the middle of the mess with preconceived notions about all of them, and not all of those notions are to either his or the potential suspect’s benefit.

At the same time, the crime has to make some kind of sense, and it just doesn’t. Or at least not for any of the members of the Iga Ryu (clan). His cousin Hanzo wants this alliance – and killing the members of the Koga delegation guarantees it will fail. Hiro’s mother, grandmother and former lover are all capable of the crime, but none of them would commit it without Hanzo’s orders as clan head. Which it made no sense for him to give. One of the women could be a traitor, but even Hiro’s jaundiced opinion of his ex makes that extremely unlikely.

None of the obvious suspects benefits – so who does? And therein lies the key to solving the mystery, in spite of all of Hiro’s many distractions.

This peek inside the closed world of the shinobi provides fascinating insights into Hiro’s history and character, as well as an absorbing mystery that seems perfectly set in its time and place. If you enjoy historical mysteries or historical fiction that provide windows into times and places that might not be familiar, this series is a treat from beginning to end. Start your trip back in time with Claws of the Cat.

I’ll be eagerly awaiting the next stage of Hiro and Mateo’s journey, hopefully next summer.

I love this series, so I am very happy to be able to give away a copy of Betrayal at Iga to one lucky US or Canadian commenter:

Review: Under a Silent Moon by Elizabeth Haynes

Review: Give Us the Ballot by Ari Berman

11 thoughts on “Review: Betrayal at Iga by Susan Spann + Giveaway”