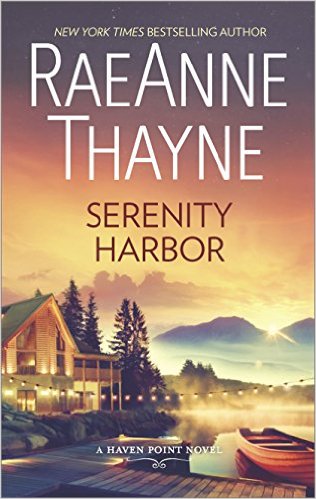 In the town of Haven Point, love can be just a wish — and one magical kiss — away…
Computer-tech millionaire Bowie Callahan is about the last person that schoolteacher Katrina Bailey wants to work for. As far as she can see, he’s arrogant, entitled and not up to the task of caring for his young half brother, Milo. But Kat is, especially if it brings her closer to her goal of adopting an orphaned little girl. And as her kindness and patience work wonders with Milo, she realises there’s more to sexy, wary Bo.
Bo never imagined he’d be tasked with caring for a sibling he didn’t know existed. Then again, he never pictured himself impulsively kissing vibrant, compassionate Katrina in the moonlight. Now he’s ready to make her dream of family come true…and hoping there’s room in it for him, too… 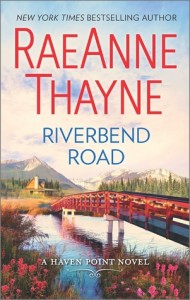 I really enjoyed my first trip to Haven Point with Riverbend Road. I liked it so much that I went back again to experience Snowfall on Haven Point. So when this one popped up at Serenity Harbor, it seemed like a great time to go back!

I haven’t managed to go back and read the first four books in the series, but I’ll probably get around to it sooner or later – this is a nice place with terrific people. It also feels like it’s right next door to Robyn Carr’s Thunder Point, even if the geography doesn’t work out. But you don’t have to read them all to get right into the action of this one.

That being said, I’m kind of glad I had read Riverbend Road, because the wedding that all of the Baileys are back in town for is the one that is set up in Riverbend Road, the wedding between Wyn Bailey and her former boss, Haven Point Police Chief Cade Emmett. The story in Serenity Harbor is not really dependent on the previous book, but it is nice to see Wyn get all of her happy.

Serenity Harbor is Wyn’s sister Kat’s story. Katrina Bailey is back in town for her sister’s wedding. She’s spent the past year in Colombia, teaching English and helping out at a local orphanage, where she’s fallen hard for Gabi, a special needs child who has become her daughter in everything but blood. And paperwork. Endless, endless, EXPENSIVE amounts of paperwork.

And Wyn seems to be the only member of her family who really, really gets that Kat will do anything to take care of 4-year-old Gabi, even if that means moving to Colombia permanently. Kat’s overbearing mother is just certain that if the right man comes along, Kat will forget all about little Gabi.

Because that’s the way Kat used to be. She ended up in Colombia because she was following the wrong man. That’s what Kat used to do, fall for whoever was handy, without thinking. But since she found herself in Colombia, alone and broke with Gabi depending on her, Kat has been determined to become a different, better and more responsible person.

And that’s where Bowie Callahan steps into the picture, along with his little brother Milo. Milo, like Gabi, is a special needs child. But where Gabi has Down Syndrome, Milo is somewhere on the autism spectrum, and Bowie, chief technical wizard at Caine Technology, has no idea how to cope.

But then again, until about a month ago, Bowie had no idea he had a little brother. It was only upon the death of their mother that Bowie learned that she had had another child long after he cut ties – ties that he desperately needed to cut for his own survival.

That’s where Kat steps in. Literally. She’s an elementary education teacher who specializes in kids with special needs, so when she sees Milo about to have a meltdown at the grocery store, she steps in and deflects him until he calms down.

Bowie offers Kat an absolutely outrageous salary to become Milo’s live-in nanny, baby-sitter, caretaker and teacher while she’s in town for her sister’s wedding. Kat, partially against her better judgment and partially to get away from her overbearing mother, takes the job, reasoning that the outrageous salary will help fund her quest to adopt Gabi.

What she doesn’t count on is falling in love with both of the Callahans. By the time she’s ready to go back to Colombia, she breaks both Milo’s and Bowie’s hearts, and very much vice versa. But Gabi needs Kat. And Kat needs to stand on her own two feet, for the first time in her life.

No matter what it costs.

Escape Rating B: The ending of this one seriously got me in the feels. So much so that it raised the grade from the Cs to the Bs in one single pang of my heart.

I also really liked Bowie and his relationship with Milo. He loves his little brother and manages not to resent all the changes that Milo has made in his life. He’s frustrated a whole lot of the time, and with good reason, but he never resents Milo himself. But his life is completely out of control, and he has no idea how to get it back on track. Not that he hasn’t tried, but Milo defeats anyone who doesn’t know how to care for him. There’s a specialist on the way, but she’s tied up for another three weeks, and Bowie has a gap he can’t fill. He’s tried. He loves Milo, but love is not enough.

Bowie is a computer programmer, and a damn good one. Also very successful at it. But I recognized his habit of losing all track of time when he’s “in the zone” because it’s a very familiar pattern to anyone who has a programmer in their life. When they’re coding, they are just gone. So I smiled every time Bowie did this, because it was so familiar.

I liked Kat as a person. She was a great heroine for this story, and the author did an excellent job of introducing the challenges and the joys of parenting a special needs child through Kat’s and Bowie’s relationships with Milo and Gabi. This story did a great job of making me feel for this situation, in spite of my not usually enjoying stories that center around difficulties with child-raising.

But, and it turned out to be a very big but, I had a difficult time understanding why Kat refused to let Bowie in. I didn’t feel as if I got enough of Kat’s past trauma to really buy into her belief that what she felt for Bowie, and what he felt for her, was just another one of her bad decisions about men, which don’t seem all that bad in retrospect. They seemed like typical high school, college and early 20s experiments. 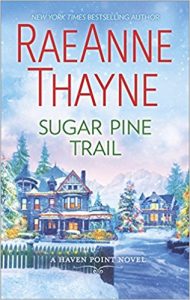 I understood why she wanted to stand on her own two feet in regards to Gabi’s adoption, but she walled everyone out to the point of not discussing her her hopes, or her quite reasonable concerns about the process, with anyone who might help her think things through or even provide a sounding board. Every time she dithered about it, the story sagged a bit. At least for this reader.

But that ending made me tear up. Happy tears, but an intense reaction for a book that I struggled with a bit in the middle. I’ll be back to Haven Point this winter with Sugar Pine Trail. I want to see how they’re all doing! And the heroine is a librarian, which makes this one doubly irresistible!

I am giving away a copy of Serenity Harbor to one lucky U.S. commenter.