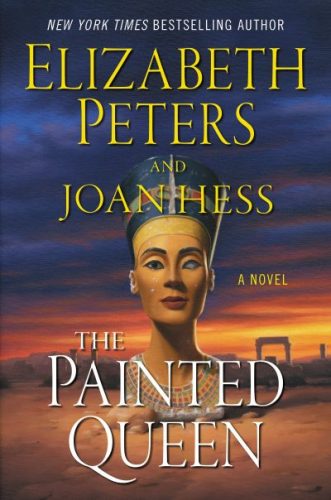 Egypt, 1912—Amelia Peabody and her dashing archeologist husband, Radcliffe Emerson, are once again in danger as they search for a priceless, stolen bust of legendary Queen Nefertiti and Amelia finds herself the target of assassins in this long-awaited, eagerly anticipated final installment of Elizabeth Peters’s bestselling, beloved mystery series
Arriving in Cairo for another thrilling excavation season, Amelia Peabody is relaxing in a well-earned bubble bath in her elegant hotel suite in Cairo, when a man with knife protruding from his back staggers into the bath chamber and utters a single word—“Murder”—before collapsing on the tiled floor, dead. Among the few possessions he carried was a sheet of paper with Amelia’s name and room number, and a curious piece of pasteboard the size of a calling card bearing one word: “Judas.” Most peculiarly, the stranger was wearing a gold-rimmed monocle in his left eye.
It quickly becomes apparent that someone saved Amelia from a would-be assassin—someone who is keeping a careful eye on the intrepid Englishwoman. Discovering a terse note clearly meant for EmersonWhere were you?”—pushed under their door, there can be only one answer: the brilliant master of disguise, Sethos.
But neither assassins nor the Genius of Crime will deter Amelia as she and Emerson head to the excavation site at Armana, where they will witness the discovery of one of the most precious Egyptian artifacts: the iconic Nefertiti bust. In 1345 B.C. the sculptor Thutmose crafted the piece in tribute to the great beauty of this queen who was also the chief consort of Pharaoh Akhenaten and stepmother to King Tutankhamun.
For Amelia, this excavation season will prove to be unforgettable. Throughout her journey, a parade of men in monocles will die under suspicious circumstances, fascinating new relics will be unearthed, a diabolical mystery will be solved, and a brilliant criminal will offer his final challenge . . . and perhaps be unmasked at last.

The Amelia Peabody series is for those who like their historical mysteries steeped in calamity, where their heroine frequently jumps out of the frying pan, into the fire, leaps from that small cooking fire to a large bonfire, from thence to a major conflagration, and finally into the cauldron of an active volcano. All told in the singular voice of an intelligent woman who is always utterly certain that she is both right and the best person to deal with whatever crisis has just erupted.

Amelia Peabody and her Egyptologist husband Radcliffe Emerson are the creations of the late, great Elizabeth Peters, herself an archaeologist under her “real name” of Barbara Mertz. Ms. Peters is no longer with us, but she left behind one final semi-completed manuscript in her hallmark series featuring the redoubtable, indefatigable, Amelia Peabody. That manuscript is, of course, the book under discussion, The Painted Queen, completed by mystery author Joan Hess. 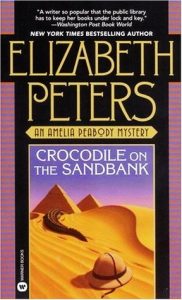 If any of the above, or what follows, sounds like your cup of tea, do not, I beg you, start with The Painted Queen. It is the end of a saga that has been going on for over 40 years. Begin with Crocodile on the Sandbank, the first book in this long-running story, where Amelia and Emerson meet and solve their first murder together. It is fun, hilarious and occasionally creepy, all at the same time. It also sets the pattern, as their long-time reis (dig foreman) puts it early on, “Another dead body. Every year it is the same. Every year, another dead body…” Or two, or three, or even half a dozen, as it is in The Painted Queen.

The action in The Painted Queen takes place in the 1912-1913 dig season in Egypt, putting it squarely into the middle of Amelia’s long and fascinating tale. While the parts of the story, and the string of murders, that revolve around her family are a direct followup to the events of A River in the Sky, the historical events are centered around the 1912 discovery of Nefertiti’s bust at Amarna.

As usual, Amelia is in everything pretty much up to her neck. Equally as usual, while she (and her son Ramses) are sought by assassins at every turn, she puts herself in the most danger by her tendency to act before she thinks – a tactic that for once her enemies are too disorganized to take advantage of.

In the end, as always, Amelia Peabody, with the help of her friends and family, and with more than a bit of assistance from divine providence, solves the mystery and keeps her family safe, if only so that they can return the following season for yet another body, and another mystery to solve.

Escape Rating B: It was great to have one last visit with these old and very dear friends. As a mystery, not all of it hangs together, and much of what makes the story work relies on the reader knowing who all these people are and how they relate to Amelia and her life, but for those of us who have read from the beginning, this coda is a treat. 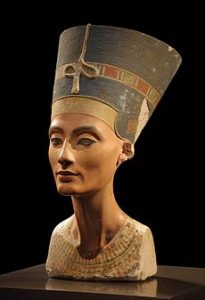 There are, as was often the case in Amelia’s history, two stories going on. One involves both the history of early 20th century Egypt and early 20th century Egyptian archaeological history. As this story takes place in 1912, events are also part of the run up to World War I and the beginning of the end for both the British and the Ottoman empires. At the same time, the finding of Nefertiti’s bust was a real historical event, an event at which the Emersons were not present, so their involvement in the mess has to be tidied over by the author before the end, so that history can proceed on the course we know that it did.

The more personal side of the story, that of the assassins who are chasing after Amelia and Ramses for their part in the death of Amelia’s ward Nefret’s unfortunate and totally scurrilous husband actually serves as comic relief, as the personal adventures of the family often do. The assassins are completely inept from beginning to end. Clearly Nefret’s late unlamented was the brains of the outfit.

Whether a reader falls in love with this series tends to ride on whether or not said reader loves or hates Amelia’s voice. The story is told from her first person perspective in her very distinctive style. We know what she knows, we know what she thinks she knows (which can be vastly different from the actual solution, at least in the early stages of each mystery) and she can be rather sure of herself and her rightness even when she is fairly far off the beam. We also hear her inner thoughts, which can often be scathing as well as funny.

She’s someone I would love to have tea with (or something stronger) but would not want to be related to except at some remove. She generally gets her way, one way or another. And she so often IS right, and not chary of reminded people of that fact. She’s a treasure as a fictional character, but would be a dratted nuisance in real life.

I’m going to miss her.

2 thoughts on “Review: The Painted Queen by Elizabeth Peters and Joan Hess”