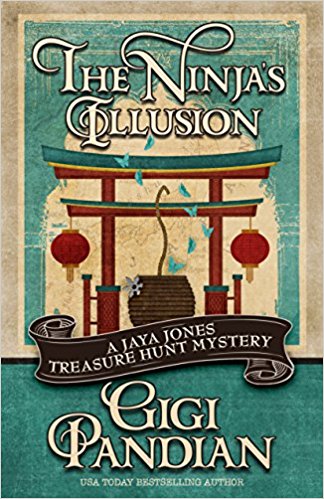 A fabled illusion performed by a stage magician who claims to possess real supernatural powers. A treasure from the colonial era in India when international supremacies vied for power. A phantom trading ship lost over 200 years ago. And a ninja whose murderous intentions in present-day Japan connect the deeds of a long-dead trader who was much more than he seemed…

When Jaya travels from San Francisco to Japan with her stage magician best friend Sanjay—a.k.a. The Hindi Houdini—for his Japanese debut, she jumps at the chance to pursue her own research that could solve a tantalizing centuries-old mystery.

With the colorful autumn leaves of historic Kyoto falling around her, Jaya soon loses sight of what’s real and what’s a deception. A mysterious ninja attempts sabotage on Sanjay’s trick, along with Japan’s most controversial magician, Akira. Ancient folklore blurs the lines between illusion and reality when a magician’s assistant appears to be a kitsune, a mythical fox spirit. As tricks escalate to murder, Jaya and her friends must unravel secrets hidden in the ancient capital of Japan, before one of their own becomes the next victim.

The Ninja’s Illusion is a lovely piece of misdirection and stage management, much like the trick that Jaya Jones’ best friend Sanjay, the “Hindu Houdini”, performs onstage as part of his magic act.

And it’s great fun to read.

This is a cozy mystery, and much of the fun, and the mystery, revolves around Jaya and her group of friends. Her best friend Sanjay has come to Japan to work with an ultra-famous Japanese magician on a trick that is famous for its impossibility – the Indian Rope Trick. But someone is stalking both Sanjay and Akira, so there is clearly much more going on than meets the eye.

Jaya, a respected historian and increasingly well-known treasure hunter, comes to Japan to support Sanjay. And to assist a Japanese historian who has unearthed a historical mystery that relates to Jaya’s area of expertise, the history of the Dutch East India Company.

But when Sanjay’s mentor is killed in a brutal attack, Jaya’s historical research takes a definite back seat to the need to figure out who killed Akira, and why. Because if it’s all about the secret of his marquee trick, then Sanjay may be next on the killer’s list. But if the trick isn’t the motive, then what is?

When Jaya finds that her original historical research leads right back to Akira and the trick that can’t be done, she has a difficult time separating the threads of her research from the increasingly desperate attempts to find something that Akira left hidden.

If all the clues from both puzzles point to the same mystery, then what is the real mystery after all? And can Jaya and her friends figure out the solution before it’s too late?

Escape Rating B+: The Ninja’s Illusion is the fifth book in the Jaya Jones Treasure Hunt series, and I had a great time with it. I have not read the previous books in the series, which begins in Artifact, and there were references to events from previous books that flew a bit past me, but I still had a terrific time with this one. Enough of a terrific time that I went back and bought the first four. I can’t wait to see how we get to this point, and the ways in which Jaya’s friendships with the other characters have developed over the series.

One of the reasons I enjoyed this book so much is that it feels like a bit of an homage to the late Elizabeth Peters’ Vicky Bliss series. While Vicky Bliss was a librarian rather than a historian, she also spent much of her madcap career hunting for mysterious historical artifacts and treasures, and was surrounded by a very similar cast of “irregulars” including an elderly mentor (Sebastien in Jaya’s life, Herr Professor Anton Z. Schmidt in Vicky’s) and an on-again, off-again lover who is as much thief as he is adventurer (Lane Peters for Jaya and John Smythe for Vicky) as well as a supporting cast of friends and fellow researchers. While there are plenty of differences, the feeling of Nancy Drew jumping out of the frying pan into the fire and falling in love with someone completely impossible feels very familiar. And as Elizabeth Peters is sadly no longer with us to continue the Vicky Bliss series, it is very, very nice indeed to have a read-alike that looks like it has the legs to keep going.

The historical piece of the puzzle also reminds me of the historical setting of the Shinobi Mysteries by Susan Spann. So if the historical parts of this puzzle sound as fascinating to you as they did to me, take a look at Claws of the Cat, the first book in Spann’s series. That one of Akira and Sanjay’s stalkers in The Ninja’s Illusion is costumed as a shinobi, or ninja, makes the link between the two just that much closer.

Magic is at the heart of this story. Not magic like in Harry Potter, but magic like in stage magic. David Copperfield. The hand is quicker than the eye. Illusions, misdirection, smoke and mirrors. Jaya spends most of the case distracted. Some of her distraction is internal, she’s trying to resolve a sudden confusion in her relationships with and between Sanjay and Lane. So she’s not thinking on all cylinders, and she’s away from home and missing her usual resources, like her librarian best friend Tamarind Ortega, who definitely reads like “one of us”, librarians, that is.

Jaya is also distracted by the endless distractions offered by what begins as two cases, Akira and Sanjay’s stalker, and her historical research into a Dutch East India Company ship of the 1790s that managed to lose itself in history by flying a false flag. Things continue along the paths of confusion for quite a long time, as just because the two cases are coming together it does not mean that there is a single perpetrator, or even a single motive, for all events.

This case is like the old story of the blind men and elephant. Each person seems to be grasping a different part, and drawing different and equally erroneous conclusions about the nature of the elephant and the case.

So if you like madcap adventures with likable characters and multiple mysteries to solve, The Ninja’s Illusion will provide not a very good time, and that’s no illusion.

5 thoughts on “Review: The Ninja’s Illusion by Gigi Pandian + Giveaway”