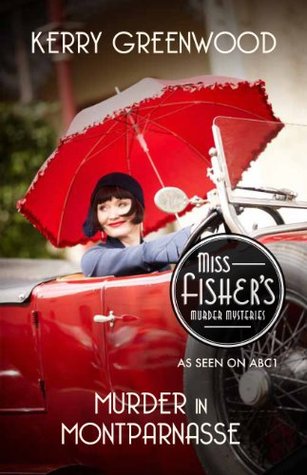 Always enticing in divine twenties fashion, Phryne, one of the most exciting and likeable heroines in crime writing today, leads us through a tightly plotted maze of thrilling adventure set in 1920s Australia. The divine Phryne Fisher returns to lead another dance of intrigue. Seven Australian soldiers, carousing in Paris in 1918, unknowingly witness a murder and their presence has devastating consequences. Ten years later, two are dead under very suspicious circumstances. Phryne s wharfie mates, Bert and Cec, appeal to her for help. They were part of this group of soldiers in 1918 and they fear for their lives and for those of the other three men. It s only as Phryne delves into the investigation that she, too, remembers being in Montparnasse on that very same day. While Phryne is occupied with memories of Montparnasse past and the race to outpace the murderer, she finds troubles of a different kind at home. Her lover, Lin Chung, is about to be married. And the effect this is having on her own usually peaceful household is disastrous."

For various reasons, some of which are detailed in this Facebook post, this week went to hell in a handcart. And a crappy handcart at that.

As usual, when I can’t concentrate on much of anything else, I turn to my current comfort read, Phryne Fisher. Murder in Montparnasse swept me back in Phryne’s world for a few hours, where there is plenty of danger, but also lots of derring-do, where justice triumphs and evil gets righteously crushed.

And where the ghosts of memory are laid to their proper rest.

For those who have watched the Miss Fisher’s Murder Mysteries series, Murder in Montparnasse was filmed, and broadcast in the middle of the first season. I recently re-watched it, so the story in the TV version is still pretty clear in my memory.

It feels like the base story is the same in both versions. There are alterations in the details, as there usually are. The TV version includes Jack and Phryne’s first kiss, when Jack needs to distract Phryne and keep her from giving the game away to the villain.

Jack in the books is absolutely nothing like Jack in the TV series, so many of the changes between versions involve Phryne’s long-term lover, Lin Chung, and the rather interesting arrangements for his upcoming marriage.

But the two versions are the same at their heart. Bert and Cec, who served together in WW1 at Gallipoli and many other terrible places, come to Phryne with a problem. Two of their mates have been murdered in such a way that both deaths appeared to be accidents, at least on the surface. The circumstances in both cases were very definitely fishy, and should have been investigated properly, but weren’t due to police incompetence. Something that Jack in the book definitely has something to say about. Whatever he is or isn’t, he is always a good cop.

Bert and Cec’s problem connects to a piece of Phryne’s past that she has tried to bury, mostly from herself. On leave at the end of the war, Bert and Cec and their mates were in Paris, and they witnessed the murder of the painter Sarcelle. Phryne modelled for Sarcelle (among others), and also knew that his death had been ruled an accident.

Their description of the incident takes Phryne back to her own Parisian experience. She remembers everything all too well, especially the cold-hearted beast who seduced her, beat her, and expected her to keep on taking it until he was done. She ran before she could be broken. But she’s never forgotten the man who broke her heart even as he tried to break her body and spirit.

The beast has come to Australia. At first, Phryne doesn’t know why. But she does know that whatever Rene Dubois is involved in this time, it must be far from the side of the angels.

All Phryne has to do is figure out what, and if and why he has to do with the deaths of Bert and Cec’s friends, before he escapes justice yet again.

This time Phryne, with the help of Bert and Cec and their mates, are going to see that the man who haunted her nightmares finally gets exactly what’s coming to him. No matter what it costs.

Escape Rating A-: As a story, this one hangs together a bit better in the book than it did on TV. Even though there are multiple plot threads here, not just Phryne’s past and the deaths of Bert and Cec’s friends but also a kidnapped young woman, a different young woman who wants to get out of the marriage her parents have arranged for her, Lin Chung’s bride’s secrets and Mr. Butler’s resignation, the threads do connect and Phryne’s ghosts get expiated.

The ending is very satisfying.

We also see more of Phryne’s past and in more detail than TV could portray. The glimpses, through Phryne’s eyes, of the post-WW1 Paris that Hemingway called “a moveable feast” are evocative and poignant. And we get a much clearer picture of what Phryne thought and felt during that transitional, ephemeral time and place. It all goes a long towards explaining how Phryne got to be who she is at the point where the books begin. For this reader, at least, it feels like Phryne preserved more of her agency in the book version that her memories indicated in the TV version. And I always prefer that my heroines have all the agency they can grab.

The ending of Murder in Montparnasse is far from tidy, but it feels incredibly right. Dubois gets exactly what he deserves. It is not a neat, clean or even legal result. But it is definitely justice. And it feels intensely satisfying to see it delivered.

A little Murder in Montparnasse was just what I needed. I think I’m going to go and watch it again.

Review: The Armies of Heaven by Jane Kindred

One thought on “Review: Murder in Montparnasse by Kerry Greenwood”