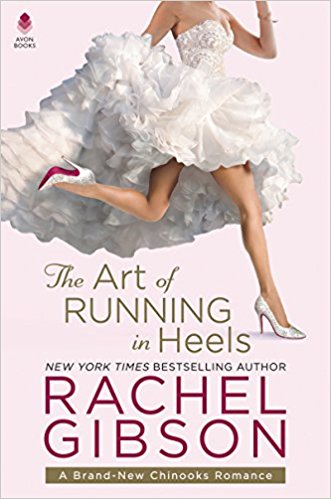 Running in five-inch stilettos is an art form

Leaving your fiancé at the altar on live television is a disaster. Lexie Kowalsky thought she was ready to get married in front of millions of people, but at the last minute she fled the set of television’s hottest reality show, Gettin’ Hitched. Wearing a poofy white dress and a pair of five-inch sparkly shoes, Lexie hopped a float plane for Sandspit, Canada. She figured no one would find her there. But she was wrong.

Sharing her flight was the Seattle Chinooks biggest star, Sean Knox. Lexie wasn’t just a reality-show runaway, she was his pain in the butt coach’s daughter. She was chaos and temptation and definitely off limits, but getting her luscious body out of that wedding gown, he couldn’t resist getting her in his bed for one amazing night.

Then a photo of Sean and Lexi breaks the internet—and suddenly they’re both swept up in a crazy plan to spin the whole story. But you can’t run from love— 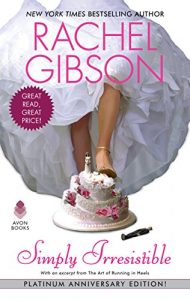 Readers have begged Rachel Gibson to return to her popular Chinooks Hockey series, and now I know why. But consider this one as “Chinooks Hockey, the Next Generation”. The series started in 1998, and the couple who found their HEA in the first book, Simply Irresistible, are now the usually proud parents of Lexie Kowalski, the heroine of The Art of Running in Heels.

Where once upon a time John “the Wall” Kowalski was a terror on the ice, now he’s a terror in the locker room, as the respected and sometimes feared head coach of his former team, the Seattle Chinooks.

And it’s the surprise of his life to discover that his oldest daughter Lexie, who has made an even more surprising success of her dog clothing and accessories business on the internet, is one of the contestants on the slightly tacky reality TV show, Gettin’ Hitched.

It’s even more of a surprise when Lexie wins, because she has no desire to get hitched, at least not to a man she barely knows and doesn’t love.

But the train has left the station, the snowball is well down the hill (complete with ACME special effects), and Lexie doesn’t know how to get herself out of the mess she’s gotten herself into. So she runs, in heels just as the title says, wearing a deliberately slight tacky wedding dress, straight into the charter plane that a friend is holding for her.

And she dives in headfirst, landing just about in the lap of Sean Knox, the newest player on her dad’s team. But Lexie doesn’t recognize Sean, even though he definitely recognizes her. He’s on his way to tiny Sandspit, British Columbia to deal with his mother’s latest bout of death-defying hypochondria, and has no desire to get anywhere near Lexie’s crazy train.

His mother’s extreme hypochondria has added all the crazy-train drama he could ever need into his life. But Lexie, lost and alone in tiny Sandspit, is hard to avoid. Especially since she needs his help.

She expected to stay out of Seattle for a couple of days and let the fuss over her runaway bride act run its course. But the open maw of the 24-hour news cycle has swallowed her story whole, and now there are entire shows devoted to “Where’s Lexie?”.

Sean helps her hide. He helps her keep herself occupied in Sandspit, and she helps him deal with his mother’s latest round of craziness. Before their little interlude in Sandspit is over, they help each other into bed.

But when Lexie returns to Seattle, alone, she discovers that there’s a downside to becoming an internet sensation. She’s the villain of this piece, and her fledgling business is paying the price. She needs Sean to help her turn her runaway bride story into something sweet and romantic.

And Sean, as much as he refuses to admit it, just needs Lexie, crazy train and all.

Escape Rating A: This one is absolutely terrific crazysauce, and completely fun from beginning to end. It had me at Lexie’s headlong dive into the plane, pretty much at the same time that she has Sean, even if neither of them is admitting it at that point.

This is one of those stories where you love it either in spite of or because of the way it starts out crazy and just turns out to be layers and layers of crazy all the way down. Because Lexie and Sean (and her little dog Yum Yum) are irresistibly fun, even if, or especially because, of the way that they keep trying, and failing, to resist each other.

It’s marvelously obvious from the very beginning that Sean and Lexie have enough chemistry to melt the biggest hockey rink. Part of the fun in the story is watching them figure out that chemistry isn’t all they have.

I have not read the rest of the Chinooks Hockey series, but it doesn’t seem necessary to enjoy The Art of Running in Heels. This book really is a fresh start to the series. I’ll also confess I’m not sure whether I will. As much as I enjoyed this one, the first book in the series revolves around a “secret baby” and that is one of my least favorite tropes ever.

But Lexie is the secret baby from that first book, all grown up. And her story is a hoot (and a holler) from beginning to end.

GIVEAWAY TERMS & CONDITIONS:  Open to US shipping addresses only. One winner will receive a paperback set of the entire Chinooks Romance series by Rachel Gibson.  This giveaway is administered by Pure Textuality PR on behalf of Avon Romance.  Giveaway ends 1/5/2018 @ 11:59pm EST. Avon Romance will send the winning copies out to the winner directly. Limit one entry per reader and mailing address.  Duplicates will be deleted. 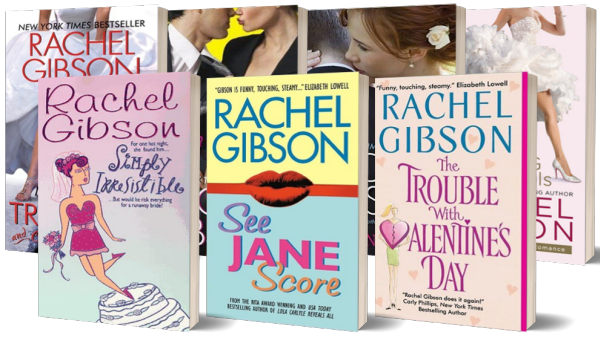