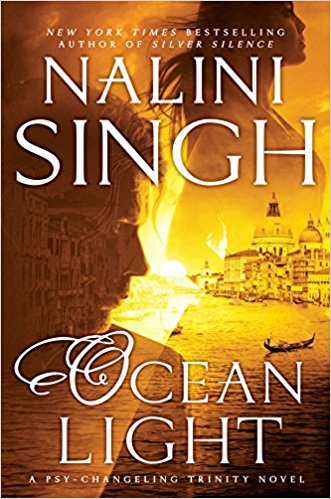 New York Times bestselling author Nalini Singh dives beneath the surface of her Psy-Changeling world into a story of passionate devotion and selfless love...

Security specialist Bowen Knight has come back from the dead. But there's a ticking time bomb in his head: a chip implanted to block telepathic interference that could fail at any moment--taking his brain along with it. With no time to waste, he should be back on land helping the Human Alliance. Instead, he's at the bottom of the ocean, consumed with an enigmatic changeling...

Kaia Luna may have traded in science for being a chef, but she won't hide the facts of Bo's condition from him or herself. She's suffered too much loss in her life to fall prey to the dangerous charm of a human who is a dead man walking. And she carries a devastating secret Bo could never imagine...

But when Kaia is taken by those who mean her deadly harm, all bets are off. Bo will do anything to get her back--even if it means striking a devil's bargain and giving up his mind to the enemy...

One doesn’t read a book in the Psy-Changeling series so much as one immerses oneself in the fascinating world that the author has created. One doesn’t just read, one dives back into something that is already there.

And those are perfect metaphors for this particular entry in the series, Ocean Light, as the plot centers around a group of changelings that have remained as mysterious as the ocean depths that they call home.

We’ve been deeply enmeshed in with the wolves, the cats and even the bears, but this is the first time we’ve visited the Black Sea Base and had the chance to seriously get to know this most diverse and most far flung group of changelings – who come from all of the many species that populate Earth’ oceans. 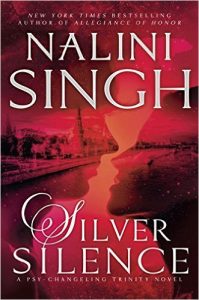 The action in Ocean Light picks up where Silver Silence left off. And that’s a hint that this is not a good place to start this series. The first book in the series is Slave to Sensation, but starting anywhere within the first few books could probably work. One warning – Slave to Sensation reads more like a typical paranormal romance than the later books, and barely hints at the depths of worldbuilding yet to come. I bounced off it the first time I read it, and only returned after some serious prompting from a friend. She was right, this series is awesome.

At the end of Silver Silence, the fledgling Trinity Accords between the changelings, the psy and the original recipe humans are under threat from a mysterious consortium that finds war between the groups much, much, MUCH more profitable than peace, and will do anything to make sure that peace does not stick around.

Because the humans are crucial to making the alliance work, the consortium targeted the leader of the Human Alliance, Bowen Knight. It would have been possible to open Ocean Light the same way that Dickens’ Christmas Carol opens, “Bowen Knight was dead: to begin with.”

Except of course he’s not. He is, however, very definitely dying, just not the way that his would-be assassins expected.

Shot through the heart by a sniper, Bowen should be dead. Instead, the miraculous medical team at the Black Sea Base replaced his flesh-and-blood (and very, very destroyed) heart with a metal heart that will probably outlast the rest of him. This isn’t out of altruism, or at least not out of altruism towards him.

The head scientist at Black Sea wants to study the other thing that’s killing him, because she thinks she might have a cure. And her clan is more than willing to indulge her wish to conduct the experiment.

Once Bowen is awake and aware of the risks and the consequences, he is more than willing to sign up for an experiment that gives him a 95% chance of ending up in the midst of his worst nightmare, leaving him as a vegetable with little or no brain function.

But that 5% chance of a full, normal life is worth fighting for – and even dying for if the research helps to save the lives of his sister and the other humans who implanted themselves with an experimental chip to prevent psy interference in their minds – because the side-effects of that experiment are definitely lethal.

After meeting Kaia Luna, the Black Sea’s head chef and part-time medical tech, Bowen discovers that he has finally found a reason not to just to survive, but actually to live – even if he only has a couple of weeks to squeeze a lifetime of living into.

Escape Rating B+: This is a difficult book to rate. I love this series. The world that the author has created is amazingly deep and rich and nuanced and just keeps getting bigger and better with every entry in the series.

But this particular entry moves a bit slowly through the first half of the story. While it is fascinating to get to finally see the Black Sea Base, the base itself is both remote and underwater – it does not get a lot of incidental contact from anyone or anywhere else.

For a good chunk of the story, Bowen is also recovering from a coma and heart surgery. And he’s being experimented on a bit by the medical chief. Even though the author has invented interesting medical breakthroughs that have kept Bowen from waking up as a wet noodle that has to recover muscle tone and physical capacity there is still some recovery time that keeps him occupied plus he needs time to learn how Black Sea operates.

Even his romance with Kaia gets off to a bit of a necessary slow start.

So there isn’t a lot of this series trademark breakneck action and suspense until the second half of the book, when Bowen is in the midst of a countdown on any possibility of life and the threats to both Black Sea and the Alliance ooze out of the woodwork.

As always, it’s the characters in the story that make it work. In this case Bowen and Kaia. We’ve met Bowen before, but he’s always been a mysterious figure, because he has deliberately worked to make himself so. Watching him take a chance at not just life but actually living was eye-opening.

Kaia is a marvelous heroine. While she is both scared and scarred, she has forged a life for herself after much trauma, and its a life where she is both loved and appreciated as much as she can be. The way that she wrestles with her fears in order to help Bowen is wonderful to watch.

All in all, I enjoyed this entry in the series, even though it wasn’t quite as compelling a read as this series usually is. I’m grateful as always that it is clear from the ending of Ocean Light that this series is far from over. I can’t wait for the next installment!