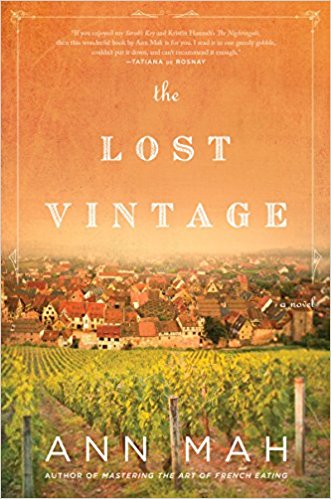 Sweetbitter meets The Nightingale in this page-turning novel about a woman who returns to her family’s ancestral vineyard in Burgundy and unexpectedly uncovers a lost diary, an unknown relative, and a secret her family has been keeping since World War II

To become one of only a few hundred certified wine experts in the world, Kate must pass the notoriously difficult Master of Wine Examination. She’s failed twice before; her third attempt will be her last. Suddenly finding herself without a job and with the test a few months away, she travels to Burgundy, to spend the fall at the vineyard estate that has belonged to her family for generations. There she can bolster her shaky knowledge of Burgundian vintages and reconnect with her cousin Nico and his wife Heather, who now oversee the grapes’ day-to-day management. The one person Kate hopes to avoid is Jean-Luc, a neighbor vintner and her first love.

At the vineyard house, Kate is eager to help her cousins clean out the enormous basement that is filled with generations of discarded and forgotten belongings. Deep inside the cellar, behind a large armoire, she discovers a hidden room containing a cot, some Resistance pamphlets, and an enormous cache of valuable wine. Piqued by the secret space, Kate begins to dig into her family’s history—a search that takes her back to the dark days of the Second World War and introduces her to a relative she never knew existed, a great half-aunt who was teenager during the Nazi occupation.

As she learns more about her family, the line between Resistance and Collaboration blurs, driving Kate to find the answers to two crucial questions: Who, exactly, did her family aid during the difficult years of the war? And what happened to six valuable bottles of wine that seem to be missing from the cellar’s collection?

This book is every bit as delicious as the wines produced by the region that it celebrates. And the history that it uncovers has just as many top notes, undertones and hidden flavors as the wine.

The Lost Vintage combines two different fictional varietals, the contemporary second-chance at love story with a heartfelt exploration of the history of the Burgundy region under the Nazi Occupation, along with the excesses enacted after liberation. And it is a story about one family finally coming to terms with all the beautiful and terrible secrets hidden in its past.

This is Kate’s story. The present we watch is her present, and it is her determination and blind luck that uncovers the hidden past.

Kate’s family are wine growers in the Burgundy region of France. Kate has always planned to have a career in the wine industry, but not as a grower. Her plan was to study, become a sommelier and eventually take the prestigious Master of Wine test.

And that’s where she’s stuck.

She’s failed the test twice, and is preparing herself to tackle the test for the third and final time. (It’s a three-strikes and you’re out kind of test). But Kate has a blind spot that is ruining her chances of achieving her dream. She just can’t seem to taste the wines from the region that her family calls home.

A place that she once, almost, made her life.

So she goes back to confront the family history, and her own. She goes back to help her cousin bring in the harvest, and to avoid as much as possible the man she almost married.

And get to the heart of everything that is holding her back from her dream. In the process, she discovers the secrets that her family has buried for 70 years – along with more than enough wine to recover their fortunes.

But first they have to resurrect the past, and begin to forgive while consciously choosing not to forget. And so does Kate.

Escape Rating A: This is an absolutely marvelous book, whether you love family sagas, wine culture, French history, World War II history or even second chances at love stories, because The Lost Vintage is all of the above.

It’s so easy to fall into this book, and especially to feel for Kate on the horns of her many, many dilemmas. She’s been driven to pursue her dreams, and she’s unconsciously following the example of her mother, a woman who pursued her own dreams at the cost of her family.

At the same time, the history that Kate uncovers eats her up, and consumes her family on multiple levels. The Burgundy region was infamous for its collaborators during the Occupation. The young woman who Kate first discovers through a yellowing high school diploma and a box of old science textbooks seems like a woman Kate would like to have met – until she discovers that her great-aunt was punished as a collaborator after the war. Sickened by the discovery of her family’s history of bigotry, at the same time she uncovers the fruits of their lost labor – a hidden collection of famous pre-war vintages, enough to save the family fortunes several times over.

But the discovery comes at too high a cost, as her Jewish cousin discovers that she has married into a family that sent others just like her to the concentration camps. And as their great-uncle creates rifts in the family by refusing to discuss the history that his own parents made him promise never to reveal.

Kate is caught between her need to learn the truth about her family, her need to learn as much as she can to pass her test, and her desire to avoid at all costs the man she almost married. A man whose family holdings are next door to her own, and whose life is interwoven with those of her cousins in France.

Even though I guessed some of the history, I was still surprised by the twist at the end. And pleased to be so surprised.

The Lost Vintage is a story to savor. Preferably with a glass of wine. Or several. And some tissues.

2 thoughts on “Review: The Lost Vintage by Ann Mah”