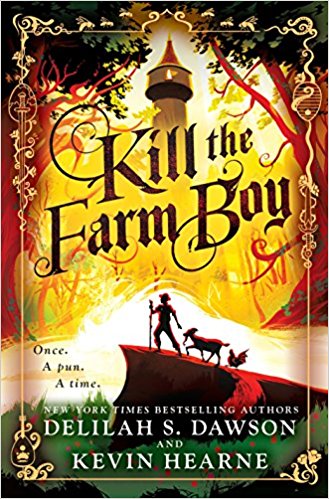 In an irreverent new series in the tradition of Terry Pratchett novels and The Princess Bride, the New York Times bestselling authors of the Iron Druid Chronicles and Star Wars: Phasma reinvent fantasy, fairy tales, and floridly written feast scenes.

Once upon a time, in a faraway kingdom, a hero, the Chosen One, was born . . . and so begins every fairy tale ever told.

This is not that fairy tale.

There is a Chosen One, but he is unlike any One who has ever been Chosened.

And there is a faraway kingdom, but you have never been to a magical world quite like the land of Pell.

There, a plucky farm boy will find more than he's bargained for on his quest to awaken the sleeping princess in her cursed tower. First there's the Dark Lord who wishes for the boy's untimely death . . . and also very fine cheese. Then there's a bard without a song in her heart but with a very adorable and fuzzy tail, an assassin who fears not the night but is terrified of chickens, and a mighty fighter more frightened of her sword than of her chain-mail bikini. This journey will lead to sinister umlauts, a trash-talking goat, the Dread Necromancer Steve, and a strange and wondrous journey to the most peculiar "happily ever after" that ever once-upon-a-timed.

Or you’d get a cheese sandwich. Or possibly both.

On the one hand, the description of this book can easily be read as a fairly typical epic fantasy. A group of adventurers, including a ”chosen one” set out from obscurity to undertake a quest.

But this particular fantasy is fractured from beginning to end. Like so many fantasies, the adventuring party consists of a wizard or two, a rogue, a warrior, a bard and a trusty steed. The opening salvo in the quest is to rescue a fairy tale princess from a sleeping castle. In a twisted cross between Sleeping Beauty and Beauty and the Beast.

That beast is a rabbit. Or at least sort of a rabbit. And sort of a girl. The rogue is a klutz, and a not very bright klutz at that. Of the two wizards, neither is exactly the leader of the Light. One fancies himself a budding Dark Lord, and the other is as grey as grey can get – except for her hair, because the natural color of that has been hiding behind magic for decades at the very least.

The dangers they face are life threatening and never ending. But there’s no farm boy in sight. Oh, there was a farm boy all right, but he gets chosen for death relatively early in the story. The real “Chosen One” is the trusty steed, but he’s neither trusty nor exactly a steed. And he likes to eat boots.

If the tongue was any further in the cheek, it would poke out the other side.

Escape Rating C+:Some of the reviewers make the comparison between Kill the Farm Boy and the Discworld. If that comparison holds at all, it’s only between Kill the Farm Boy and the first two Discworld titles, The Color of Magic and The Light Fantastic, where Sir Terry was merely skewering the genre and not exactly plotting a story. And where he clearly had no clue yet that he was at the beginning of something that needed a real plot, sympathetic characters and at least a bit of internal consistency to wrap around that skewer.

While I love the work of both of this book’s authors, Delilah Dawson for the Blud series and Kevin Hearne for the Iron Druid Chronicles, this collaboration does not live up to either of their previous work, nor to any of the many antecedents I mentioned at the beginning of this review.

And that’s a real pity, because Kill the Farm Boy had so much promise. And it does have its funny moments. But in the end it doesn’t deliver – even though it’s obvious that the co-authors had tons of fun in the process of writing this.

The snark is too thick and the plot is too thin. It reminds me of the lesson that Mike the computer learns in Robert A. Heinlein’s marvelous The Moon is a Harsh Mistress. Mike is trying to teach himself humor, and his human friend introduces him to the difference between “funny once” and “funny always”. Kill the Farm Boy attempts to be “funny always” by keeping up a nonstop torrent of snark and in-jokes. 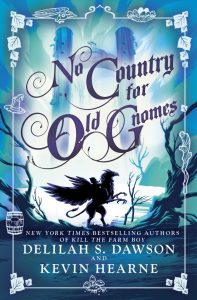 And those are almost always “funny once”.

But we’ll be back in Pell for No Country for Old Gnomes. It took Sir Terry until at least Mort (Discworld #4) for that series to really get its legs under it. Maybe The Tales of Pell will manage to get there a little sooner. We’ll see.