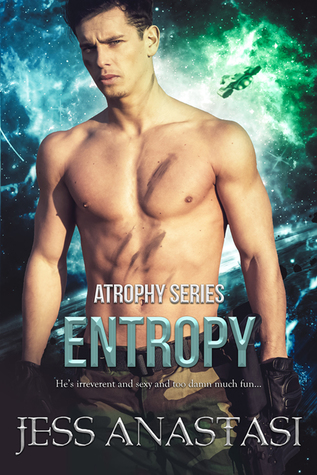 Captain Qaelan Forster is used to trouble. He lives on the wrong side of the law and he’s on the most-wanted lists. He’s mixed up in his cousin's mess who has problems on a cosmic level—like shape-shifting aliens who want them dead. But Qaelan’s not prepared for the cheeky kind of trouble called Camille Blackstone, whose infamous father has any man interested in his daughter executed.

After Camille drags Qaelan into an impulsive act of rebellion, she finds herself trying to defend the sexy captain from her overprotective father's wrath, even if she has to handcuff herself to the captain to keep him alive. However, it soon becomes apparent there are much more dangerous things lurking in the dark corners of the universe than a vengeful pirate lord. And she's just landed in the middle of it.

Initially Entropy has more of the feel of the Blood Hunter/Dark Desires series by Nina Croft (which are awesome BTW), or this author’s own Valiant Knox series than it does the earlier books in the Atrophy series. Then a significant part of the focus switches from Captain Qaelan Forster to his cousin Captain Rian Sherron, and we’re back at Firefly – or at least a version of Firefly where Captain Mal Reynolds and River Tam are combined into one crazy person with Mal’s dark moods and unsavory enemies along with River’s insane powers and even more insane nightmares.

And where it turns out that this universe’s version of Inara Serra has more than a bit of River Tam in her, too.

If you’re not still mourning Firefly, or if the resonances just don’t work for you, it doesn’t matter. The Atrophy series is not a clone of Firefly by any means. But if you still have a Serenity-shaped hole in your heart, it does come more than close enough to staunch that wound.

What we do have is a band of misfits and rebels out to save the galaxy from itself. Because this crew of rebels and misfits has found itself in the midst of a galaxy gone terribly, terribly wrong. We’ve been invaded, not by the usual bug-eyed monsters, but monsters nevertheless.

The Reidar are shapeshifting aliens from another galaxy who think that homo sapiens is so far from sapient that they’re using us as lab rats while impersonating key members of every planetary government in the system.

Only Rian Sherron and the crews of the Imojenna and the Ebony Winter know the threat. And Rian Sherron is out to eliminate that threat any way he can – even if that means allying with pirates and taking the Reidar out one at a time.

But Rian’s lost his ship, and his crew has been laying low in the Barbary Belt, a notorious pirate haven run by an even more notorious pirate. And that’s where the trouble begins. It’s not even Rian’s fault – at least not this time. At least it’s not all Rian’s fault.

His cousin Qaelan Forster makes the mistake of getting involved with the pirate’s daughter. Cami Blackstone. Her father has killed plenty of men for a whole lot less. Instead, he sends Qae on a wild goose chase that might get him killed – or might pay off what the pirate sees as Qae’s debt to him. Mostly the pirate sends him on a dangerous and possibly suicidal mission just to protect his own street cred. The man is, after all, a notorious pirate.

Cami has other plans. Her plans, her father’s plans, Qae’s plan to pay her daddy back, and Rian Sherron’s plans to get his ship back all collide in one big ball of wrong that might just have a chance or turning out right.

But has a much higher chance of getting them all killed. All in a day’s work for the crew of the Imojenna – even when the Imojenna herself is nowhere to be found. 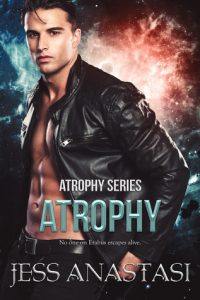 Escape Rating B+: There’s a lot going on in this entry in the Atrophy series, and all of it turns out to be a rip-roaring good time. But be warned, while Atrophy is not so much like Firefly that you won’t get it if you don’t remember the show, it is very much like unto itself. This is a series where the action and the overall story build from one book to the next. So if this sounds like your kind of trip into the black, start with the first book in the series, Atrophy. (If you love SFR you’ll understand why this series has won multiple SFR Galaxy Awards.)

The relationship between Qae and Cami is a big part of this story, but not by any means all of it. They are an interesting couple. Qae is openly flirtations with anyone of any gender. Think of Captain Jack Harkess in Doctor Who and Torchwood, or the character of Reyes Vidal in the video game Mass Effect Andromeda. Qae has plenty of charisma, no humility whatsoever, and a trail of previous lovers from one end of the galaxy to the other. He doesn’t lead anyone on, but he also doesn’t leave anyone with even a chance at a piece of his heart.

Cami, on the other hand, is buttoned up tight, and with good reason. Her daddy, the pirate Rene Blackstone, has “disappeared” any guy she’s ever looked at twice. She doesn’t know whether those guys are dead or just far, far away – and she’s way too scared to find out. She’s caught in the middle, working for her father, living at home, treated like a teenager when she’s well into her 20s, and too scared to go out on her own. She’s both afraid of her father and afraid of the kind of people who will go after her in order to get at her father – and she’s right to be afraid.

Literally chaining herself to Qae is her chance, not only at rebellion, but at putting her demons to rest and making a life for herself out from underneath her father’s heavy thumb. That Qae, Rian and their crew are strong enough to stand up to her father is a big part of her reasoning.

In addition to the romance, there is also a big piece of this book that moves the overarching story forward. Rian goes after his missing ship after a year dirtside. His need to get his ship back lines up very well with the older Blackstone’s need to get back at his deadliest rival – AND – gives Cami a chance to take her life back from the bastard who stole her confidence and her innocence years ago. It’s going to take a big, bold plan with a lot of moving pieces to make good on all of the competing and conflicting agendas in play. There are so many ways it can go pear-shaped – and so many times it very nearly does.

This story feels like a turning point in Sherron’s one-man crusade against the Reidar. He finally finds a way to take the fight to them, and it’s clear that things are going to heat up – and get a whole lot bloodier, from here.

And I’m all in with his crew. I can’t wait to see what crazy twists and turns this series goes through next, as well as which crew member finds that one person in the galaxy who makes them whole – and fills an empty spot on the ship’s roster!.

Jess is giving away a $15 Amazon Gift Card to one lucky entrant on this tour! 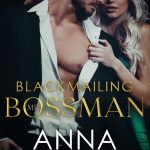 One thought on “Review: Entropy by Jess Anastasi + Giveaway”