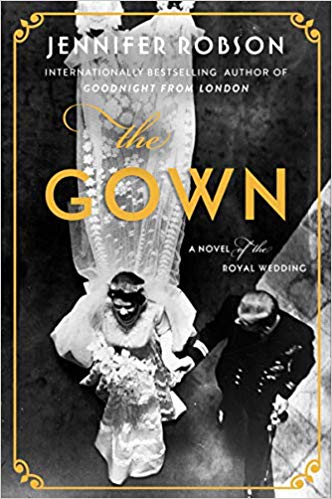 From the internationally bestselling author of Somewhere in France comes an enthralling historical novel about one of the most famous wedding dresses of the twentieth century—Queen Elizabeth’s wedding gown—and the fascinating women who made it.

“Millions will welcome this joyous event as a flash of color on the long road we have to travel.”—Sir Winston Churchill on the news of Princess Elizabeth’s forthcoming wedding

London, 1947: Besieged by the harshest winter in living memory, burdened by onerous shortages and rationing, the people of postwar Britain are enduring lives of quiet desperation despite their nation’s recent victory. Among them are Ann Hughes and Miriam Dassin, embroiderers at the famed Mayfair fashion house of Norman Hartnell. Together they forge an unlikely friendship, but their nascent hopes for a brighter future are tested when they are chosen for a once-in-a-lifetime honor: taking part in the creation of Princess Elizabeth’s wedding gown.

Toronto, 2016: More than half a century later, Heather Mackenzie seeks to unravel the mystery of a set of embroidered flowers, a legacy from her late grandmother. How did her beloved Nan, a woman who never spoke of her old life in Britain, come to possess the priceless embroideries that so closely resemble the motifs on the stunning gown worn by Queen Elizabeth II at her wedding almost seventy years before? And what was her Nan’s connection to the celebrated textile artist and holocaust survivor Miriam Dassin?

With The Gown, Jennifer Robson takes us inside the workrooms where one of the most famous wedding gowns in history was created. Balancing behind-the-scenes details with a sweeping portrait of a society left reeling by the calamitous costs of victory, she introduces readers to three unforgettable heroines, their points of view alternating and intersecting throughout its pages, whose lives are woven together by the pain of survival, the bonds of friendship, and the redemptive power of love.

This is not about Elizabeth. Instead, it is a story of friendship, and family. And it is a story about the making of what is now a historical artifact, but was, once upon a time not so very long ago, a dress in which countless young women invested their hopes and dreams.

That one of those young women became the Queen of England is not the point of this story. Instead, this story is about two of the women, representing so many more, who worked tirelessly to make not just Elizabeth’s dreams but their own come true.

Even if theirs, at least, turn out to be rather different from what they expected.

There is a 21st century framing story wrapped around this gown, but the purpose of the frame is to take the reader back into the lives of two women in 1947, Ann Hughes and Miriam Dassin, one English and one French, who have both been scarred by the war – one more than the other.

And who were equally marked by the dark and dismal years after, but again, one more than the other.

Ann and Miriam meet in the embroidery room of the designer Norman Hartnell, whose signature was his use of embroidery in the gowns he designed for the upper crust of English society, particularly the royal family.

So we are there with Ann and Miriam as they work together on one of the studio’s great creations, and as they survive the intense furor that surrounds its secrecy. An intensity that costs them both so much.

As the story begins, we are at the end. Ann has died, and left her granddaughter Heather a mysterious legacy – a box of intricate embroidery samples – but no clues. Ann was extremely reticent about her life before she moved to Canada in 1948, and her family knows nothing about who she was, where she came from or why she emigrated. And that’s the way she wanted it.

But the mystery intrigues Heather. When she discovers that the beautiful samples in the box match the designs on Queen Elizabeth’s wedding gown, she is determined to discover whether her grandmother was one of the women who worked on it – and why she kept it a secret.

Heather’s search leads her back to the past – and into her own future.

Escape Rating A: It’s not the framing story that really grabs the reader – it’s what’s within that frame. Heather’s search is interesting for what it reveals, not for itself. But what it reveals is an incredible story with light and color, depth and heartbreak.

Miriam and Ann come from entirely different backgrounds. Ann is as English as the Tudor roses that she embroiders on the gown. Miriam, on the other hand, is a transplant. A refugee from Paris, a young woman who spent the Occupation hiding in plain sight from the Nazis until she was finally caught as a member of the Resistance. She was fortunate that the Nazis never discovered that she was also a Jew. Unlike the rest of her family, Miriam survived the war. But could not make herself remain in France and found herself in the studio of Norman Hartnell, working beside Ann.

As they work side by side on the gown, and eventually become friends, roommates and sisters-of-the-heart, the paths of their lives meet and eventually switch. Ann is forced to leave behind the work she loves and go to Canada. She never takes up the needle again – or at least not the embroidery needle. Miriam, after so much tragedy in her early life, finds happiness and eventually fame.

But the two never forget each other, even though they never meet again. That Ann sends Heather to Miriam brings the story beautifully full circle.

This is a story that is all about the feels. The desperation of the post-war austerity years, the fast friendship between two women who are otherwise alone in the world, the joy of doing fulfilling work and the pain of hard decisions.

And it’s as beautiful as the gown it celebrates.

4 thoughts on “Review: The Gown by Jennifer Robson”