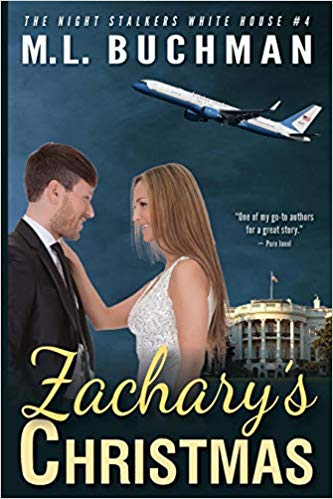 -a Night Stalkers White House Christmas romance- NAME: Zachary Thomas JOB: Vice President of the United States FAMILY: A distant two-star general and a self-involved Olympic swimming coach NAME: Melanie Anne Darlington JOB: She hasn't a clue FAMILY: White House Chief of Staff and a powerful Southern legacy Zack's political career thrives-his star shines brightly. The only thing missing? Someone to share it with. Anne's brother embraces the White House career he was born to do. Unfortunately, Anne's own future shines as clearly as a snow globe blizzard on a dark winter's night. This holiday season, each day opens a new window to the vista of their future in Zachary's Christmas.

There may not be an actual half-life for reading holiday stories after the season, but for me it feels like anytime after Twelfth Night (January 5) is pushing something. Or just gives me a sense of trying to get one last lick of a candy cane that has dwindled down to nothing – at least until the next fall.

So when I received Zachary’s Christmas from the publisher over the New Year’s weekend in exchange for my usual honest review, it seemed like the time to review this was NOW, especially since this is an older holiday title (albeit one I had not read) from one of my favorite authors.

And it’s short – and this was a day when I needed a short book to review. I fell way too far down the Harry Potter fanfic rabbit hole this holiday. My bad – but it was fun.

In the fictional universe created in the author’s absolutely awesome Night Stalkers military romance series, Peter Matthews is the current liberal president of the U.S. And yes, I wish this aspect of the series were real. I wish it very, very much.

Zachary Thomas is Matthews’ Vice-President, and looks to be the next nominee for President from their party. It’s Matthews’ second term, so that talk is timely. But one of the interesting things about Zach Thomas is that he is single, never married, and has still managed to have a successful and scandal-free political career.

Into this walks Anne Darlington, whose brother happens to be the current White House Chief of Staff. Anne comes to DC in chilly December to visit her brother, because she’s at a kind of personal crossroads. She’s been the very successful manager of their family’s ranching and restaurant business back in Tennessee, but she’s discovered that it isn’t for her. She’s good at it, but she doesn’t love it. The job, that it. She loves the ranch just fine but doesn’t want to live there.

Her brother Daniel, on the other hand, lives for the ranch and can’t wait for his White House career to be over so that he can go back and run the place. But that’s his dream for later, because right now he’s doing good and important work and doesn’t want to leave it until the job is done.

(Whether helping to clean things up in Washington DC is a job that is EVER done is an entirely separate question not within the scope of either this book, this series or this review.)

Zach meets Anne in her brother’s office and the chemistry between them is instant. Not just the sexual sparks, of which there are plenty, but the intellectual challenge. They meet on multiple levels, and it’s special for both of them.

So special that Zach asks Anne out that evening to hear the holiday concert at the National Botanical Gardens. And these two people start to open up to each other, reaching out towards each other out of their separate loneliness. That type of painful loneliness that happens when you’re busy and surrounded by people all the time, but where you can’t let anyone in and no one really sees the real you.

Their whirlwind affair gives Zach all the time he needs, and it isn’t much, to figure out that Anne is the one woman for him. But between his work and his increasing happiness, he doesn’t see – and Anne doesn’t show or tell him – the problems that brought her to DC in the first place.

So while he thinks they’re on a path to happy ever after, Anne fears that she’s on a path where she becomes an adjunct of someone powerful but not a person with her own purpose – and that’s just the fate she came to DC to escape.

Whether they can find a way for both their needs to get met is anyone’s guess. But there are plenty of people pushing both idiots in the right direction.

Escape Rating B: There were lots of things that I really liked about this story, and one that felt just a bit incomplete or unfinished – hence the B rating.

I liked the romance between Zach and Anne. It was definitely a fast whirlwind, but it worked for this story. I also felt for Anne and just how bowled over she was by the constant presence of both the Secret Service and the Press. Her family is wealthy and powerful, so she’s used to being in public and giving speeches and having people watch her. But the DC goldfish bowl still feels intimidating to her – understandably so.

While I understood her hesitation about throwing herself to the wolves of the Press, the part of the story that felt incomplete was the depth of her self-doubt. She initially turns down Zach’s proposal because she fears being lost in his shadow. But she doesn’t ever talk to him about the issue, nor does she ever explain what brought her to DC in the first place. While I felt for her dilemma, my feeling for her had way more to do with me projecting my feelings onto her than her actually articulating them.

Also, she doubts herself constantly and continually minimizes her own capabilities and her own accomplishments. While we all have self doubt (as women we generally have buckets of it) hers don’t seem founded. They’re not rooted in anything and they are of a depth that just begs for there to have been a root cause – which just isn’t there.

But those minor reservations aside, I still had a terrific time on my visit to the Matthews’ White House, peeking in on this lovely romance. I look forward to going back for more.

Review: Vacant by Alex Hughes (+ a giveaway and a scavenger hunt)
Holiday Kisses

One thought on “Review: Zachary’s Christmas by M.L. Buchman”