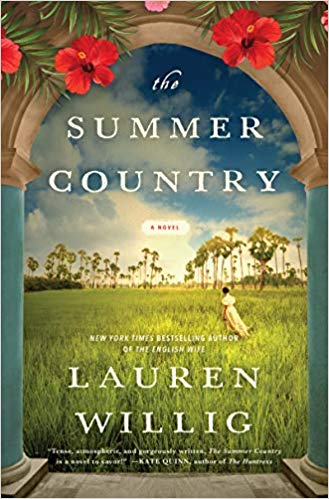 Emily Dawson has always been the poor cousin in a prosperous merchant clan—merely a vicar’s daughter, and a reform-minded vicar’s daughter, at that. Everyone knows that the family’s lucrative shipping business will go to her cousin, Adam, one day. But when her grandfather dies, Emily receives an unexpected inheiritance: Peverills, a sugar plantation in Barbados—a plantation her grandfather never told anyone he owned.

When Emily accompanies her cousin and his new wife to Barbados, she finds Peverills a burnt-out shell, reduced to ruins in 1816, when a rising of enslaved people sent the island up in flames. Rumors swirl around the derelict plantation; people whisper of ghosts.

Why would her practical-minded grandfather leave her a property in ruins? Why are the neighboring plantation owners, the Davenants, so eager to acquire Peverills—so eager that they invite Emily and her cousins to stay with them indefinitely? Emily finds herself bewitched by the beauty of the island even as she’s drawn into the personalities and politics of forty years before: a tangled history of clandestine love, heartbreaking betrayal, and a bold bid for freedom.

When family secrets begin to unravel and the harsh truth of history becomes more and more plain, Emily must challenge everything she thought she knew about her family, their legacy . . . and herself.

The first book by Lauren Willig that I read was The Secret History of the Pink Carnation, probably 15 years ago. It got me hooked on her lush historical books, and I dip into one whenever I have a bit of time.

And so we come to The Summer Country, another lush and sumptuous historical by Lauren Willig. Unlike her well-known Pink Carnation series, this story takes place not in late 18th century France, but in mid-19th century Barbados.

However, they are both time slip stories. But the time that is slipped in The Summer Country encompasses considerably fewer centuries. The Pink Carnation series tells its historical story through a 21st century frame. But The Summer Country interweaves the past of Barbados at two periods only a couple of generations apart. Its “past” is in the early 1810s, and its “present” in the mid 1850s.

At any cost. At all the times.

Escape Rating A-: The Summer Country is an example of the kind of epic family saga that they don’t publish much anymore. Because it’s a marvelous example of that kind of sweeping story, it does make the reader wonder why not. It’s lovely and captivating and pulls the reader into its world, much as its Barbados setting pulls in the characters who find themselves navigating the exotic and unfamiliar colony in the wake of their grandfather’s death.

A death that sets the whole story in motion.

This is a story about secrets, the cost of keeping them, and the fear of letting them go. It’s also a story that unspools as lazily as a day in the colonial heat – complete with an overarching sense of menace that coats the skin like sweat – and bites like the local mosquitoes.

It’s not a book to rush through. It begins with Emily Dawson, doing her level best to make her own way in this new world, trying to unravel the mystery that her grandfather has left her with his bequest of the ruined Peverill plantation. We see Emily buck the tide of ALL the men in her life and her orbit who are just certain that a woman couldn’t possibly know her own mind.

And we see the past, when her grandfather was a young man at Peverills, not as the owner, but as the poor bookkeeper. And we see all the people who stood in both their ways – some of whom still do.

It’s enthralling, it’s delicious, it’s decadent and at times it’s downright chilling. This is a book to wallow in – and you’ll be glad you did.

3 thoughts on “Review: The Summer Country by Lauren Willig”