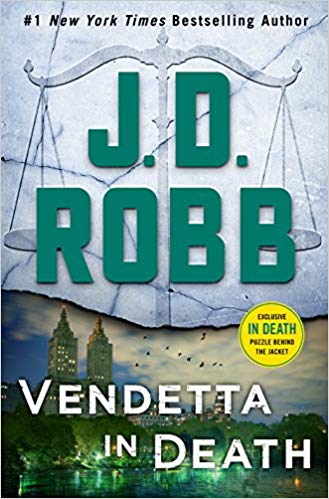 She calls herself Lady Justice. And once she has chosen a man as her target, she turns herself into a tall blonde or a curvaceous redhead, makes herself as alluring and seductive as possible to them. Once they are in her grasp, they are powerless.

The first victim is wealthy businessman Nigel McEnroy. His company’s human resources department has already paid out settlements to a couple of his young victims—but they don’t know that his crimes go far beyond workplace harassment. Lady Justice knows. And in one shocking night of brutality, she makes him pay a much steeper price.

Now Eve Dallas and her husband, Roarke, are combing through the evidence of McEnroy’s secret life. His compulsive need to record his misdeeds provides them with a wide range of suspects, but the true identity of Lady Justice remains elusive. It’s a challenging case, made even more difficult by McEnroy’s widow, who reacts to the investigation with fury, denial, and threats. Meanwhile, Lady Justice’s criminal crusade is escalating rapidly, and if Eve can’t stop this vigilante, there’s no telling how much blood may be spilled…

It’s strange to say that a series that always begins with a dead body is a comfort read, but the In Death series has always been one for me. The series is now 49 books in, and at this point I’m reading it more to catch up with my “friends”, the characters in this long-running series, than I am to see whodunnit – or how or why for that matter.

This one begins with more than a bit of schadenfreude. While the killer seems somewhat righteous albeit more than a bit off the rails, the victim, well, the victim was no innocent. His death seems like a case of evil getting its just desserts. The more we find out about the scumbag, the less we sympathize with him.

But this series, is not, and never has been, about vigilantism. There’s a motto on the door of Eve Dallas’ Homicide squad room that reads:

NO MATTER YOUR RACE, CREED, SEXUAL ORIENTATION, OR POLITICAL AFFILIATION, WE PROTECT AND SERVE*, BECAUSE YOU COULD GET DEAD.
*EVEN IF YOU WERE AN ASSHOLE.

All of the victims in this entry in the series were definitely assholes. The serial killer taking them out got their names – and the nature of their crimes – from their victims, the members of a support group for women who have been harassed, abused, raped or otherwise victimized by men.

Eve Dallas knows how those women feel firsthand. It’s part of her own history that her father raped and beat her until she killed him when she was 8, completely, totally, utterly and absolutely in self-defense. At the age of eight she had already been on both sides of this case, as the victim of the abuser and as the killer of same.

But as much as she empathizes, she’s a firm believer in the rule of law. For her, vigilantism is never the way.

So she hunts down a killer who expects to find in Eve a kindred spirit. And is instead uncovered by a righteous cop.

Escape Rating B: This was the book I wanted to read this week. The book I’m listening to has its sad and serious aspects, so I was looking for something that would sweep me away to something not-so-heartbreaking for a little while. The irony is that this series, steeped in tragedy and death, does that for me.

The appeal of this series is in the characters. Part of the appeal of police procedurals in general is the ambiance of the cop shop that lies at its center. In the case of the In Death series, I just plain like these people. It’s not that they are all nice – because some of them certainly are not. It’s that they are interesting, they do their jobs well, they care about each other, and they all have a terrific line in snarkitude. Even Galahad, Dallas’ and Roarke’s cat, has snarkitude to spare. Although his is probably more cattitude. But he’s definitely a scene-stealer – and he humanizes people who might otherwise be either too perfect, too broken, or too perfectly broken to otherwise work.

So I read this series just to catch up on the gang. That being said, there isn’t anything particularly special about this entry in the series. Which doesn’t change the fact that I enjoyed spending time with them.

There’s always a case. This time around the case feels more a part of our early-21st century than Dallas’ mid-21st century – or attitudes don’t change much in the intervening 40 years. And probably the latter, damn it.

The spree killing that Dallas has to stop feels like a direct response to the #MeToo movement, and the idea that it has to have failed, again, to change much is a bit depressing. On the other hand, so far we haven’t had the Urban Wars that her world went through, so there’s that.

But we don’t feel for the victims in this one. They are all scum. It’s easy to see what sets the killer over the edge. All victims had first victimized the women in their lives – and they all got away with it. And for all the reasons that women who report being raped or abused don’t get justice in the real world. The men have more power and society is predisposed not to believe us because we’re women.

The killer is easy to spot, and relatively easy for Dallas to catch. The only thing that allows the spree to stretch to four victims is that the killer strikes every single night. This story is fast, taking place over four short but jam-packed days and nights.

Good does triumph and evil does get its just desserts. But this is fiction, so there will be a part of many readers, including this one, wondering if the killer should have been allowed to go on just a bit longer. And that’s a scary thought in a way. It turns out that the lesson is that vengeance is easy, but that justice is very, very hard. 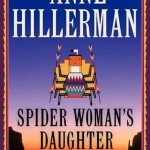