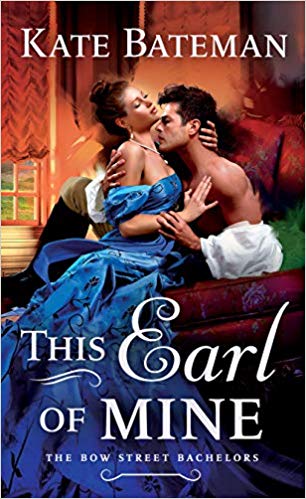 The first book in a new Regency romance series, an heiress and a rogue accidentally end up in a secret marriage of convenience.

In a desperate bid to keep her fortune out of her cousin's hands, shipping heiress Georgiana Caversteed marries a condemned criminal in Newgate prison. The scoundrel's first kiss is shockingly heated, but Georgie never expects to see her husband again. Until she spots him across a crowded ballroom. Notorious rogue Benedict Wylde never expected a wife. He was in Newgate undercover, working for Bow Street. To keep their marriage of convenience a secret, Wylde courts Georgie in public, but the more time they spend together, the more their attraction sparks. Could an heiress with the world at her feet find happiness with a penniless rake? Kate Bateman's This Earl of Mine is a delightful start to the Bow Street Bachelors series, with witty banter, dynamic characters, and swoon-worthy romance.

The way that this story opens reminded me of something I’ve always wondered about. Considering the incredible lengths that Regency heroines seem to have had to go to in order to protect themselves from predatory family members and their machinations, just how vanishingly small was the percentage of even slightly functional families among the upper classes?

I understand completely why Georgie goes to the lengths she does to keep her (OMG) cousin Josiah from compromising her so that she is forced to marry him, so that he can drain her extensive fortune to the dregs. He’s a complete wastrel, addicted to gambling, alcohol and opium – and he’s also complete slime. I can totally empathize with her desire not to marry him under any circumstances and don’t blame her a bit for the ruse she intends to enact.

I only question why there doesn’t seem to be anyone getting this bastard off her back – before he puts her on hers against her will. I’ve read this trope before, and it is infuriating. We empathize with her immediately, but as level-headed as Georgie is I can’t help but think there should be someone effective on her side.

But I love Georgie as a protagonist. She is smart, she’s a successful businesswoman, she knows her own mind and skills and is both willing and able to act on her own behalf. She is not waiting for anyone to rescue her – and I’m happy that she isn’t. She neither needs nor wants someone to stand in front of her and fight her battles for her. She needs someone to stand beside her, support her in her own struggles and assist her when she decides she needs assistance.

That she finds that person in Newgate Prison is a surprise to everyone involved. Herself – and himself – included.

She goes into Newgate intending to marry a condemned prisoner who will be conveniently (for Georgie, anyway) hung the next morning. She ends up married to Ben Wylde, a covert agent of the crown masquerading as a convicted smuggler and working for Bow Street (hence the title of the series).

Ben is the brother of the impoverished Earl of Morcott. He’s also a veteran of the recently and hopefully finally completed Napoleonic Wars. Most important for the story, he’s a known rake on the fringes of the ton, those sticklers of high society. A high society that Georgie’s ambitious mother wants to ascend to, by way of Georgie’s beautiful but clumsy younger sister.

Which means that Georgie and Ben are fated to meet as soon as he bribes his way out of Newgate – not that he was in there as his real self in any case. It was all part of his current case for Bow Street. But their marriage is valid, which leaves Georgie and Ben on the horns of a rather dicey dilemma. (Horns is also punnily appropriate for Ben’s condition every time they are within sight of each other!)

Georgie needs to be married to fend off Cousin Josiah. Ben has neither the need nor the desire for a wife – whatever he feels for, or in the presence of, Georgie. Particularly as it is well known that Ben and his brother John (the Earl) are in dire need of a rather large fortune to redeem their late father’s many, many (many) gambling debts. While Georgie, who possess that large fortune from the successful shipping business that she inherited and has expanded (all by her ownsome, thankyouverymuch), is naturally wary of men who want to marry her for access to her fortune.

But they are stuck with each other. Or are they? Georgie very nearly gamed the system before in order to protect what she holds dear. Can she do it again – with Ben’s able assistance?

And can they manage to do it for keeps?

Escape Rating B+: I certainly enjoyed This Earl is Mine, and that’s because of the characters. Georgie is an absolute gem. Her independence of thought, and her willingness to act on that thought, make her a character that 21st century readers can easily identify with – and root for.

At the same time, the strictures wrapped around her life also firmly ground her in her time and place – or at least do so enough to not make her attitudes anachronistic. She knows what she’s good at, and she knows what she’s worth – and not just in the financial sense. At the same time her life is hemmed in by the restrictions placed on women of her time. She colors outside the lines but not too much and is always aware that there are lines and that she – and her family – will pay a price if she steps too far outside those lines and is caught.

She also knows what she wants in a man and a husband, and isn’t willing to settle for less. She just doesn’t believe that she can have what she wants – a man who will stand beside her and not in front of her. The way that she and Ben find out just how good they are together, while filled with plenty of heat, isn’t based solely on their explosive sexual chemistry. They become friends first – in spite of how difficult that seems. And what they share that matters the most is their love of adventure in a way that bonds them so closely that when they finally realize they love each other they are both shocked, because neither of them expected it – or the other – at all.

That Ben’s pride almost gets in the way of their happiness feels real – and that they overcome it due to her good sense and forthright nature seems right.

On my other hand, Cousin Josiah reads like a bit of a paper tiger. He’s terrible and awful but as soon as Georgie has someone effective in her corner his fate is inevitable. And that whole situation felt a bit contrived from beginning to sticky end. 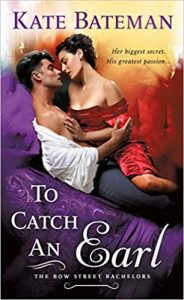 I will say that this book drove me a bit crazy, because I kept having the feeling that I’d read something a lot like it before. And I’ve been looking for what that was for days now.

In the end, This Earl of Mine feels like a combination of The Duke’s Den series by Christy Carlyle, the Bareknuckle Bastards by Sarah MacLean and the Bastion Club by Stephanie Laurens – all the best parts of each, of course. It also bears a strong but slightly twisted resemblance to the Sebastian St. Cyr series by C.S. Harris. I say twisted in that last instance because the author took a character who should have been the hero of a romance and turned him into a tormented solver of mysteries for Bow Street. Ben Wylde and his friends feel like the other side of that coin, a war veteran like St. Cyr who solve crimes for Bow Street while staying on the romantic hero side of the equation.

If you like any of those series, you will also love This Earl of Mine, and vice-versa. But the Bow Street Bachelors are far from finished. The series will return with To Catch an Earl next summer, when the focus moves from Ben and Georgie to Ben’s friend and fellow agent, Alex. And I’m looking forward to the season AND definitely the book!

Thanks to the publisher, I am giving away a paperback copy of This Earl of Mine to one lucky US commenter on this tour!

4 thoughts on “Review: This Earl of Mine by Kate Bateman + Giveaway”