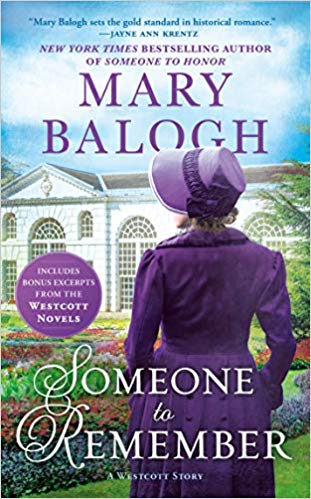 It's never too late to fall in love in this enchanting new story, a novella in the Westcott series from New York Times bestselling author Mary Balogh.

Matilda Westcott has spent her life tending to the needs of her mother, the Dowager Countess of Riverdale, never questioning the web of solitude she has spun herself. To Matilda, who considers herself an aging spinster daughter, marriage is laughable--love is a game for the young, after all. But her quiet, ordered life unravels when a dashing gentleman from her past reappears, threatening to charm his way into her heart yet again.

Charles Sawyer, Viscount Dirkson, does not expect to face Matilda Westcott thirty-six years after their failed romance. Moreover, he does not expect decades-old feelings to emerge at the very sight of her. When encountering Matilda at a dinner hosted by the Earl of Riverdale, he finds himself as fascinated by her as he was the first day they met, and wonders whether, after all these years, they have a chance at happiness together. Charles is determined to crack the hard exterior Matilda has built up for more than three decades, or he will risk losing her once again....

There’s always something that links all the books in an ongoing series. It’s often family – or at least found family. Sometimes it’s place – even if occasionally that’s work place rather than home place. 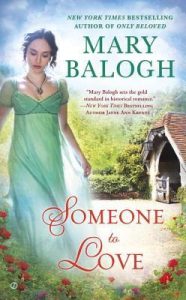 At first, in the terrific, long-running Westcott series (start with Someone to Love and settle in for a fantastic binge-read), it seemed like it was family. And it sort of is. The late, unlamented Humphrey Westcott is a presence throughout the series, even in his absence.

Very much in his absence, as the series only kicks off because he’s kicked off.

But now I’m starting to think that the link between all the entries in the series is that all these people, at least one in each story, had lives that were blighted in some way by the late unlamented, and their story is their chance at a Happy Ever After that he denied them, or delayed for them, or did or would have derailed in one way or another.

While it’s fairly obvious exactly how Humphrey blighted the lives of the children who thought they were legitimate – only to discover they were not (Camille in Someone to Hold, Abigail in Someone to Honor), or the wife who discovered that she wasn’t (Viola in Someone to Care) it’s a bit less obvious here.

But still relevant. It’s not that Humphrey had the direct ability to prevent his older sister’s marriage – because he didn’t. But his misbehavior did. His sister Matilda and his parents wanted to believe that Humphrey’s terrible behavior were the result of him being led astray by his scandalous friend Charles Sawyer. Sawyer’s behavior after Matilda rejected his suit certainly lent credence to that belief.

Sawyer became such a figure of scandal, even after his ascension to his father’s title, that it made him a byword as a rake and a rogue. And Matilda comforted herself with that, even as she continued into spinsterhood, at the beck and call of her rather waspish mother.

Or so it all seemed. For years. Decades even. Until Matilda inserted herself back into Charles’ life, however briefly, in order to wrest some happiness for one of those blighted nieces at the end of Someone to Honor.

Only to discover that very few of the things that either Matilda – or her mother – assumed long ago were quite the way they appeared to be. Humphrey’s long-ago scandalous behavior was certainly not due to the malign influence of Charles – more likely the other way around.

And that even 36 long years is not enough to erase a love that was meant to be. After all, it’s never too late to become the person you might have been. 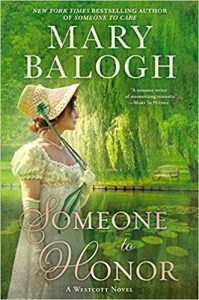 Escape Rating A-:With one half of an exception, I’ve loved every single book in this series, and Someone to Remember is definitely not an exception to that!

But Someone to Remember is different from the other books in this series. First, this is a novella, so it’s rather delightfully short. (It’s even shorter than it appears to be from the description as a fair bit of that page count is devoted to teaser chapters for ALL of the previous books in the series).

Second, while one could start the series in any number of places – Humphrey casts such a long shadow that his disgraceful actions are explained at least a bit in every story – there’s no way to start the series here. Someone to Remember works because we have read what has come before and are already rather deeply involved with the Westcott family. And some of what makes this story so lovely is the way that the assumptions that we – and Matilda – have come to during previous events get so delightfully turned on their heads in this one.

Third, this is a story that has more internal life than external. It’s a story where more – much more – is thought and felt than occurs on the surface. Matilda, and Charles spend a lot of this book thinking about the past and their missed chances – the many roads not taken – and those events in the past are more dramatic than what happens in the present.

It’s not so much that this is a second chance at love story as it is that it exemplifies a quote from John Greenleaf Whittier that goes, “For all sad words of tongue and pen, the saddest are these, ‘It might have been’.” Charles and Matilda spend much of this story contemplating those ‘might have beens’, looking back at all that they did, and just how different the present might be if they had done things just a bit differently. And yet, the problem with wanting to change things is that things change. Just because things might have been different, doesn’t mean they would have been better.

They’ll never know what that different past might have looked like, even though neither of them can stop thinking about it. All they can do is move forward into a new and brighter present – and future. And it’s lovely to read a romance between two 50somethings that, while different, is every bit as romantic as any story in this lovely and charming series.

And this series is blissfully not over. After all, Humphrey Westcott blighted a LOT of lives. The next book in the series will be Someone to Romance, this time next year.

Review: Duke City Split by Max Austin + Giveaway
The Taming of the Rake

2 thoughts on “Review; Someone to Remember by Mary Balogh”