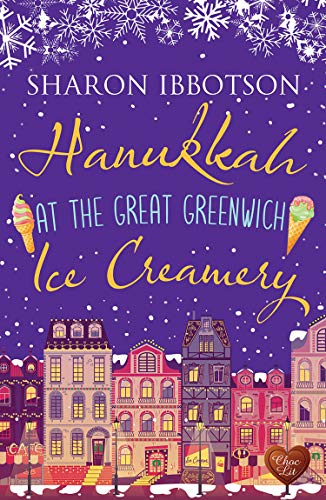 A heart-warming Christmas romance with a lovely twist!

Cohen Ford is a man who could do with a little bit of sweetening up. It’s no surprise that when he walks into The Great Greenwich Ice Creamery on a typically gloomy London day before Christmas, he insists on a black coffee rather than his childhood favourite – strawberry ice cream.

But then he meets River de Luca, the woman behind the flavours. After their first encounter, Cohen begins visiting the ice creamery every Tuesday, gradually learning more about the intriguing River. Could her influence encourage cynical Cohen to become the man who embraces Christmas, Hanukkah and even strawberry ice cream?

I picked this book because it was a Hanukkah romance – and there are entirely too few of them. There a oodles of Xmas romances – and they are often quite lovely – but it’s always nice to see oneself and one’s own culture represented in stories.

There wasn’t quite as much Hanukkah as I was hoping for, but there were plenty of the mixed feelings associated with being Jewish in the midst of what feels like the entire universe celebrating an entirely different holiday.

And the romance that begins at the Great Greenwich Ice Creamery is definitely a sweet and delicious scoop of love at first sight – with strawberry ice cream on top..

Cohen Ford comes to the Great Greenwich Ice Creamery not long before the holidays because, frankly, he’s been guilted into it by his mother. But he keeps coming back because he’s fallen in love with the daughter of the proprietor – and can’t keep away no matter how much her mother disapproves, both of him and of any possibility of a relationship between the disappointing son of one of her oldest and dearest friends and her daughter, who is deaf.

Men have taken advantage of River de Luca before, and her mother is determined to prevent it this time. Because she’s heard all about Cohen Ford from his mother and is just certain that her friend’s cold-hearted, self-centered, disappointment of a son is definitely the wrong man for her daughter. Not that she believes that any man is good enough for her daughter.

But Cohen and River fall in love the moment they meet – when she’s bandaging him up because he banged his head on their door. And even through their communication barrier – they manage to convey to each other that they are both on the exact same page – even if they’re both in the middle of scribbling on that page as fast as they can so they can learn everything they need to know about each other. Which is everything.

That Cohen is supposed to leave London in a few short weeks to return to his high-pressure job and empty life in New York is just one more obstacle that they have to overcome.

In the end, Cohen’s choice is easy – and River’s has already been made. Home is where the heart is – and his is with River.

Escape Rating A-: Hanukkah at the Great Greenwich Ice Creamery turned out to be a holiday story with just the right mix of flavors. It’s sweet with just a bit of bitter and salt, like the best dark chocolate with sea salt sprinkles.

The sweet comes from the romance itself. The bitter comes from Cohen, and his memories of his childhood with his feuding and often absent parents. There are deep wounds there that he has to get over before he can move forward with River. The salt is from tears, tears of grief that Cohen never healed his relationship with his father, and tears of joy that he does finally set himself on the road to healing his strained relationship with his mother.

I do feel the need to say OMG – or perhaps oy vey – about the stereotype that is Cohen’s mother. And as much as I want to make negative comments about the stereotyping, she’s a bit too much like my own mother for me to make that claim. I want to and I just can’t. It made a bit of hard reading, but in the end it felt right – and made me wish for things that are no longer possible.

Returning to Cohen and River and their holiday romance. I’m not totally sure this needed to be a holiday romance. Usually the holiday trope is used to compress the time available for the story to move quickly from meeting to loving to HEA. But Cohen’s impending return to New York created that same tension. On the other hand, the Hanukkah season added poignancy to Cohen’s reconciliation with his mother.

In the end, this story has two wonderful threads running through it. One is the holiday romance, which was lovely every step of the way. The way that they reach towards each other and find ways to communicate and to get on the same page in spite of their very real communication issues was very well done.

But the other thread was all Cohen. He comes into the story as Scrooge, cutting himself off from all emotion and living for his well-paid but soul-destroying job. This story is his journey. He needs to grow up and learn what he really wants to be when he grows up. He needs to learn to live his own dream instead of somebody else’s. The spirits don’t do it all in one night. But they do manage it all the same.