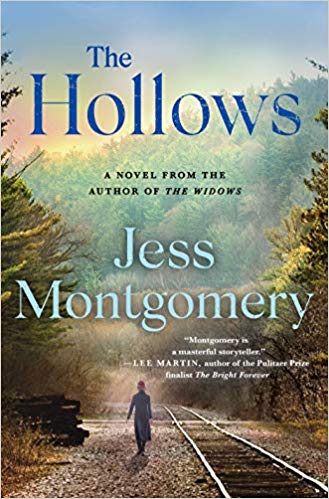 Jess Montgomery showcases her skills as a storyteller in this powerful, big-hearted and exquisitely written follow-up to her acclaimed debut The Widows.

Ohio, 1926: For many years, the underground railroad track in Moonvale Tunnel has been used as a short cut through the Appalachian hills. When an elderly woman is killed walking along the tracks, the brakeman tells tales of seeing a ghostly female figure dressed all in white.

Newly elected Sheriff Lily Ross is called on to the case to dispel the myths, but Lily does not believe that an old woman would wander out of the hills onto the tracks. In a county where everyone knows everyone, how can someone have disappeared, when nobody knew they were missing? As ghost stories and rumors settle into the consciousness of Moonvale Hollow, Lily tries to search for any real clues to the woman’s identity.

With the help of her friend Marvena Whitcomb, Lily follows the woman’s trail to The Hollows—an asylum is northern Antioch County—and they begin to expose secrets long-hidden by time and the mountains.

I want to call this “Southern Gothic” but it isn’t really Southern and only parts of it are gothic. But still, that feeling persists.

While this isn’t truly Southern, it also kind of is. It may be set in Ohio, but it’s in the southeast corner of the state, a place that has always been more a part of Appalachia than it is the Midwest. Far away from the big cities, which would have been Cincinnati and Cleveland at the time this story is set, locked in their eternal rivalry.

I’m from Cincinnati. There are other cities in the state, but Columbus wasn’t the big city it is today, although Toledo was probably bigger than it is now. And Cincinnati was more important than it is today. Times change. But that rivalry between Cincy and Cleveland will go on forever.

The Gothic looms over this story in the form of The Hollows Asylum in not too distant Athens. The place from which the elderly, female inmate/patient walks away at the beginning of this story, only to meet her death by falling into a remote railway tunnel ahead of an oncoming train.

It’s that death, whether by misadventure or murder, that drags Sheriff Lily Ross out into the night to see the body and begin her investigation into the true cause of the poor woman’s death – whoever she might be.

But Jane Does, even poor, wandering, confused and possibly senile Jane Does, deserve justice. No matter how many people want Sheriff Ross to let the unnamed dead rest in peace. Or perhaps especially because so many people don’t seem to want the woman’s death to be properly investigated.

And there are plenty of people who don’t believe that Sheriff Ross is the proper person to do the investigation – no matter what it might or might not uncover. Being sheriff is certainly not a suitable job for a woman – even if she “inherited” the job from her late husband.

But Lily can’t afford to listen to the naysayers. If she’s not willing to do her best for the least of her constituents then she has no business running for the job in her own right. And she is running for the job. It might not be anything she expected to be doing, but then she never expected to be a widow in her late 20s with an aging mother and two young children to take care of, either.

She does the best she can, no matter where, or how far it takes her. Even back into the long past. Or into the cells of the asylum – as an inmate.

Escape Rating A-: This wasn’t at all what I was expecting – and I mean that in the best way possible. I think I was expecting more of a historical mystery, with the emphasis on the mystery. Not that there isn’t a mystery in this story because there certainly is.

However, the book I actually got has a lot more depth than the typical historical mystery. This is more like historical fiction that has a mystery in it. There’s plenty of meaty history here, and unveiling the secrets of the past is really the heart of the story – not that plenty of dirty-deeds aren’t being done in its present.

While the individual characters in this story are fictional, there’s also a lot of excellent grounding in real history, beginning with the character of Sheriff Lily Ross. There really was a female sheriff in southeastern Ohio during this time period. Just as the main character of Girl Waits with Gun was also based on a surprising real-life example.

The deeper history that Lily uncovers, the secrets of the past and present in which this case is grounded, are also real, giving the events a resonance that they wouldn’t otherwise have. And I don’t just mean the dark roots of the case in the Underground Railroad, but also the surprising dark present of the WKKK, the Women’s Ku Klux Klan. That’s a bit of history I didn’t know and was perversely fascinated and totally disgusted by at the same time. It makes sense that it existed – unfortunately – but the popular image of the KKK is always men in white masks and robes. That their wives had a “ladies auxiliary” as so many organizations did, feels both right and chilling at the same time. 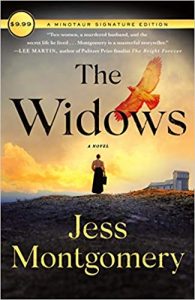 But this is also a work of fiction, and it’s a story that is wrapped around its strong female characters. Not just Lily Ross herself, but also her friends Hildy and Marvena as they each find their way after the tragic events of the previous book in this series, The Widows. While there was enough backstory provided that I was able to understand where each of these women was coming from without having read that story, I’m sure that there is plenty of nuance that I’m missing out on. So you can read The Hollows as a standalone but I’m about half-sorry that I did.

While this is Lily’s story, Marvena and Hildy each have their own character arcs and points of view in The Hollows, and they all follow different trajectories, as their lives have after those previous events. Lily has become Sheriff, and is currently in the midst of an election campaign to maintain her job. She’s still grieving for her late husband, still hurting on many levels, but has a job to do and two young children to raise. She’s also caught on the horns of a dilemma that women still face today when doing a so-called man’s job. She has to be hyper-competent while not crossing a line into imitating a man while fending off all of the many, many people who believe she can’t do her job or she shouldn’t do her job or she shouldn’t even want to do her job.

Marvena is a union organizer fighting her own battles both against the coal mine owners and the members of the union who are against integration and are raising the banner of the KKK. That part of her struggle feeds into the mystery in both the past and the present.

Then there’s Hildy, who I must admit drove me bonkers. Everyone thinks she needs protecting, that she really wants a woman’s traditional life and role. And that she should marry the local grocer because he’s her best chance. Hildy, on the other hand, is struggling against the way that everyone else sees her and the way that everyone else believes they know what’s best for her, including the lover that she can neither give up nor acknowledge. Her vacillating between the life she believes she desires and the person who makes her happy were a bit hard to take over the course of the entire story. But, and in the end it’s a very big but, she finally puts her courage to the sticking point and does what’s best for her, no matter how difficult the journey will ultimately be.

In conclusion, The Hollows was a story that took me up and swept me away. It intrigued me with its creepy mystery and gritty and all too real history. And it got me seriously invested in the lives of its strong female characters and the dilemmas they faced that were both very different and all too familiar.

And last but not least, I want to say that the atmosphere of the story reminds me quite a bit of Sharyn McCrumb’s Ballad series. And that’s excellent company to be in!

I’m giving away a copy of The Hollows to one very lucky US winner on this tour! 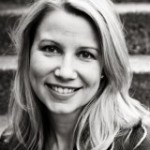 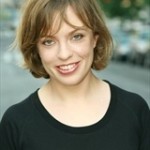 7 thoughts on “Review: The Hollows by Jess Montgomery + Giveaway”