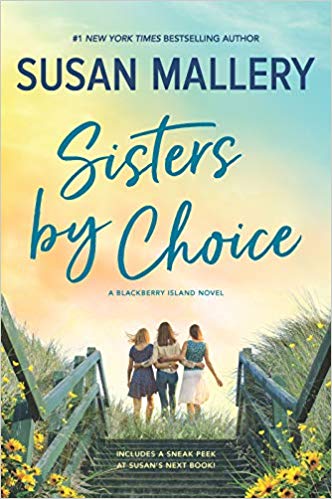 Welcome to the Excerpt tour for Sisters by Choice by Susan Mallery. This is going to be my first trip to Blackberry Island, but Susan Mallery is an author that I love and I am always thrilled to be part of a tour for her newest book. Sisters by Choice will be coming out on February 11, and I’ll be reviewing it that week. But in the meantime, here’s a bit of Chapter Two of the book to whet your reading appetite. I’m certainly looking forward to this one, and I hope you will be too!

Excerpt from Sisters by Choice by Susan Mallery

The Blackberry Island Inn featured comfortable beds, views of the water and a daisy motif Sophie wasn’t sure she totally understood. Daisies weren’t exactly a big thing on the island. If a business wanted to appeal to tourists, then the more black­berries, the better. Yet, there were daisies in the room, daisies on the wallpaper and hundreds, possibly thousands, of daisies planted along the driveway leading from the parking lot to the main road.

As Sophie walked toward her car, she shivered in the damp, chilly air. She’d forgotten how the island was given to real sea­sons, unlike back in LA where there was nearly always sun­shine. Today there were gray skies and the choppy, black waves of the Sound.

Under normal circumstances, and on a Monday morning, Sophie wouldn’t have noticed any of that. Instead, she would have been totally focused on her business and what needed to get done that day. But—and she would never admit this to any­one but herself—these days she was feeling a little fragile and disoriented.

It was the fire, she told herself. Losing her business, not hav­ing any of her employees want to move. Okay, and the loss of CK. That reality still had the ability to bring her to her emo­tional knees. And maybe the fact that she was thirty-four years old and she wasn’t any closer to having her life together than she had been at twenty. She was all about the work and with CK Industries in limbo, she felt lost.

“Not after today,” she whispered as she turned right at the end of the drive and headed toward the very small industrial area on the island.

The real estate agent was meeting her at the warehouse at nine. Sophie would get the key and have a look at the space she’d leased for the next five years.

She drove past touristy shops and wineries before heading in­land. There was a small shopping center, the K through eighth-grade school and a few medical buildings. Behind all that were a few office buildings, a handful of small businesses that would do everything from repair your car to clean your carpets. At the end of the street was the large warehouse.

She parked by the front door. She was early and the place looked closed up tight, so she walked around the outside of the building.

There was a front office and reception area with big windows and lots of parking for employees. The loading dock was plenty large. Products would come in and then be shipped out to cus­tomers. Given that this was literally the only warehouse on the island, she figured she’d been lucky to get it. Now she just had to make everything work.

Sophie returned to her car and waited for the agent. She sat in the front seat, with the driver’s door open, sipping her take-out coffee. She’d skipped breakfast at the inn, feeling too yucky to bother eating.

A salty breeze blew in from the west, but despite the gray skies, she didn’t think it was going to rain today. Sophie won­dered if her years in Los Angeles would make it difficult for her to adjust to the weather, or if it would matter at all. She assumed she would be working her usual sixteen-hour days. As long as the roof didn’t leak, she wasn’t sure she would even care about something as mundane as the weather.

A small SUV pulled into the parking lot. Sophie stood to greet the real estate agent. Once the key was in her hand, she would feel better, she told herself. She could get started on rebuilding CK Industries and everything would be fine.

Twenty minutes, two signatures and a brief conversation later, Sophie walked into the warehouse and waited for a sense of re­lief or even elation. The space was huge—nearly double what she’d had in Valencia. There were about a dozen offices, plenty of bathrooms and a massive open area where she could install miles of shelves and have the shipping center of her dreams. It was great. It was better than great, it was…

“Awful,” Sophie whispered, turning in a circle and taking in the emptiness around her.

She’d started CK Industries in the second bedroom of a two-bedroom apartment she’d rented while still in college, although the concept had been born in her freshman dorm room. From there she’d moved to a small space in a Culver City industrial complex. Two years after that she’d needed more square foot­age. The move to Valencia had come after her divorce and at the time, she’d felt excited—as if she were escaping to a new life.

This relocation wasn’t that. This had been forced upon her by bad electrical wiring. She hadn’t been prepared for the dev­astation—physical and emotional—of it all and to be honest, she wasn’t excited about the work she was going to have to do. It was overwhelming.

She wanted to stomp her feet and demand a do-over. Or at least a recount. But there was no one to complain to. This was her baby and only she could make it a success. “Lead, follow or get out of the way,” she reminded herself. “Winners win. I am the champion. It’s up to me. I can do this.”

None of the words seemed to be getting through but at least saying them was better than admitting defeat. She walked over to one of the huge loading dock doors and pushed the button to open it. Cool air blew in. Sophie lowered her backpack to the floor, sank down to sit cross-legged and prepared to get to work.

She needed everything. Employees, product, shelves, shipping supplies, office supplies, office furniture and Wi-Fi. While still in Los Angeles, she’d picked out everything she wanted but had waited to order until she knew the size of all the various spaces. She also had a big, fat insurance check sitting in her bank ac­count to pay for it all.

She got out her computer and, using her phone as a hotspot, logged on to the local internet provider and arranged for service. She would order everything else back in her room at the inn. The house she’d rented wouldn’t be available until the end of the week. Once she was settled there, she could fully focus on the business. In a couple of months everything would be run­ning smoothly and it would be like the fire never happened. Or so she hoped.

3 thoughts on “Spotlight + Excerpt: Sisters by Choice by Susan Mallery”