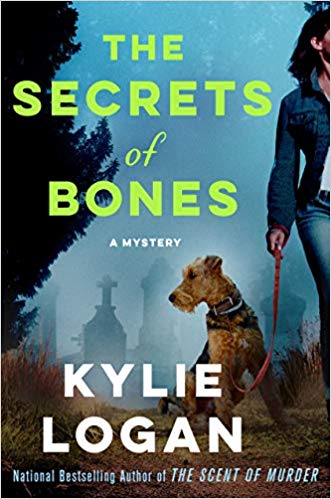 Second in a new series from national bestselling author Kylie Logan, The Secrets of Bones is a riveting mystery following Jazz Ramsey as she trains a cadaver dog.
Assembly Day at St. Catherine's dawns bright and cloudless as professional woman gather from all around Ohio to talk to the schoolgirls about their careers in medicine, at NASA, and as yoga instructors. Administrative assistant Jazz Ramsey is involved herself, giving the girls a taste of her lifelong passion: cadaver dog training. Her adorable new puppy Wally hasn't been certified yet, so she borrows the fully-trained Gus from a friend and hides a few bones in the unused fourth floor of the school for him to find.
The girls are impressed when Gus easily finds the first bone, but for the second Gus seems to have lost the scent, and heads confidently to a part of the floor where Jazz is sure no bones are hidden—at least not any that she's put there. But Gus is a professional, and sure enough, behind a door that shouldn't have been opened in decades, is a human skeleton.
Jazz recognizes the skeleton as Bernadette Quinn, an ex-teacher at the school who'd never returned after one Christmas break, though letters and postcards from her had seemed to indicate there was no cause for worry. But now it seems Bernadette never left the school at all, and her hiding place makes it clear: this was murder.
Bernadette's strident personality means there are a plethora of suspects inside the school and out of it, and as Jazz gets closer to the truth she can't help but wonder if someone might be dogging her footsteps . . . 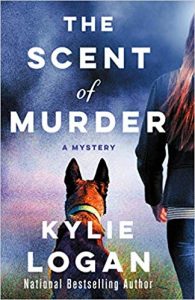 I really was hoping for more about the dogs, especially after the first book in the series, The Scent of Murder. Instead, I got a lot more of Jazz Ramsey, the Catholic college prep school where she is the principal’s administrative assistant, and yet the late discovery of the remains of another person tied to the school.

But I also got more of Jazz stumbling and falling into being an amateur detective again, as well as her fumbling her way back into some kind of relationship with her ex-lover and current friend Nick. Both luckily and unluckily for Jazz, Nick isn’t the investigating officer this time around, when Jazz and a retired cadaver dog discover human remains other than the ones she planted for demonstration.

It’s creepy to think of a school where a dead body has been decomposing on an unused floor for two years. The wildest stories that the students have made up and passed around about the weird things that happened on the old building’s sealed up Fourth Floor have acquired whole new chapters after old Gus discovers the body of a teacher that everyone thought had merely resigned.

After all, she left a letter of resignation. Why would anyone think she was dead? But the body in the closet suggests otherwise. Rather strongly.

When the police detective who IS in charge of the investigation starts out thinking that Sister Eileen, the founder and principal of St. Catherine’s, might be the murderer, Jazz is sure that a) he’s wrong and b) he’s more than a bit of an asshole. Which means that Jazz is off to the races poking her nose into yet another murder.

The entire investigation turns out to be a lesson about that classic definition of the word “assume”, as in “assume makes an ass out of u and me” – and not just for amateur sleuth Jazz. The body has desiccated beyond easy recognition, locked in that not-exactly-climate-controlled “attic” for more than two years. The victim is identified based on her rather distinctive clothing and effects. The timing is certainly right.

But is the body?

In the meantime, this series, and this book in it, feels like it’s right on the edge between “cozy” mystery and just plain mystery. And I like that edge.

On the one hand, Jazz is a bit of the typical amateur detective, who gets involved because someone she knows is either the victim, the suspect, or both. But her entry into the mystery is not just unusual but more than a bit creepy – and closer to a traditional mystery. She finds a body, by accident for her, perhaps, but all part of a day’s work for the dog. It also feels like Jazz gets in a bit more danger than the usual cozy mystery sleuth.

The mystery in this one is particularly interesting because of the kind of “hothouse” atmosphere of the school. (In that way, it kind of reminds me of Sarah Gailey’s marvelous Magic for Liars, which is also set in a school, albeit one more like Hogwarts. Also Trace of Deceit by Karen Odden, despite its Victorian setting.) But the ambiance of teachers dedicated to teaching mixed with students who think they run the place – and sometimes do – along with angry parents just sure their little “darlings” couldn’t possibly have committed whatever wrong they so manifestly did, is a setting just ripe for drama – and murder. So many hormones, and so much heightened emotion!

Like most mystery series, cozy or not, in order to like the series one needs to like the protagonist, in this case, Jazz and her family, friends and colleagues. I find her eminently likeable, and will be happy to follow more of her adventures.

For the series to continue, Jazz needs to start finding bodies in the wider Cleveland area and not just of people connected to St. Catherine’s. Otherwise the place is going to have a higher murder rate per capita than even Cabot Cove, and that’s just not reasonable for a school in an area where there are plenty of other options.

That being said, I’m enjoying Jazz’ adventures, her fumbling increase in detective skills, and her slowly re-developing relationship with Nick. She has a unique way of stumbling over bodies that seems to be an excellent method for dragging her into new cases – and the reader right along with her. 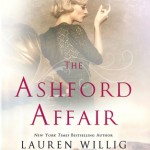