Last week I asked if people minded if I continued to post pictures of George and was told to “never stop”. So here’s George, watching the fwapping movements of Lucifer’s tail looking for an opportune moment to pounce. While you can’t see Lucifer’s face in this photo, let me assure you that it conveys the mixed messages of long-suffering “there is no such thing as an opportune moment” with “if you must I’ll briefly allow it.” Lucifer is being surprisingly patient, as this seems to happen most nights. George can’t resist a moving tail, his own or anyone else’s! 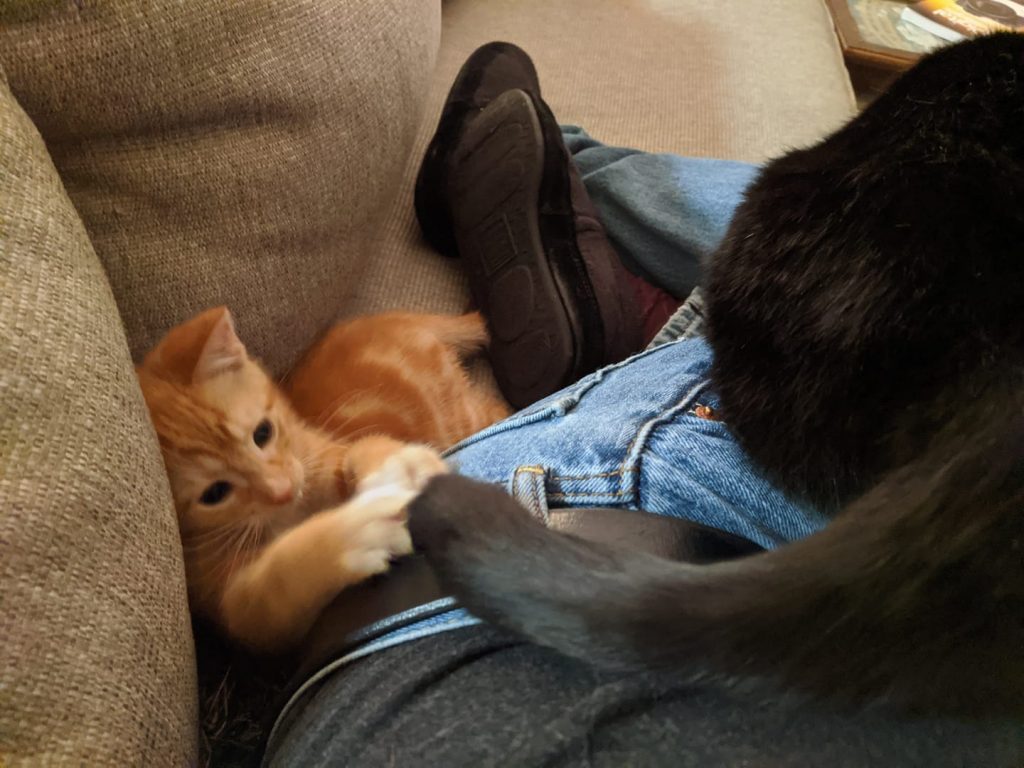 But speaking of cats, and managing to connect it with books, The Year of the Cat is from a kickstarter campaign that is going to bring me – you guessed it – 12 months of books of cat stories. This will be GRAND!

For Review:
Emerald Blaze (Hidden Legacy #5) by Ilona Andrews
His Only Wife by Peace Adzo Medie
How to Rule an Empire and Get Away with It by K.J. Parker
It Will Just Be Us by Jo Kaplan
The Legal Affair (Singh Family #2) by Nisha Sharma
Lowcountry Boondoggle (Liz Talbot #9) by Susan M. Boyer
Members Only by Sameer Pandya
Murder on Cold Street (Lady Sherlock #5) by Sherry Thomas
My Name is Anton by Catherine Ryan Hyde
Nophek Gloss (Graven #1) by Essa Hansen
Tane (Hell Squad #20) by Anna Hackett
The Year of the Witching by Alexis Henderson

Purchased from Kickstarter:
A Cat of a Different Color (Year of the Cat #1) edited by Kristine Kathryn Rusch & Dean Wesley Smith