For today’s George picture I have a cuddle puddle. George desperately wants to snuggle with another cat, but our bunch don’t seem to be same-species cuddlers. George, however, is certainly making his best effort, while Freddie seems to be too sleepy to argue about it. 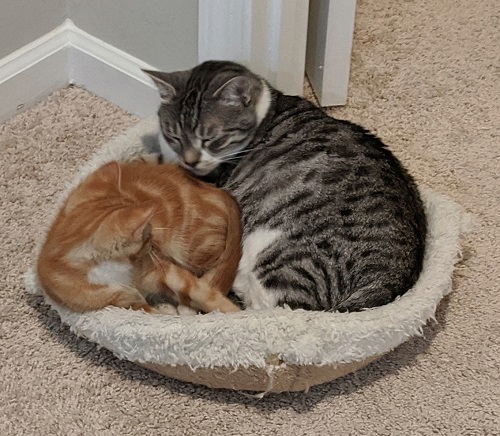 The lists of books are reducing in size a bit, which is a good thing. Which doesn’t mean I’m not having a difficult time concentrating, because I certainly am. I’ve discovered that once I get into something I don’t have any problems sticking with it, but it’s just hard to settle down and get stuck into something. Maybe I’ll imitate the cats and get myself stuck into a nice nap for a while.

For Review:
The Distant Dead by Heather Young
Faithless in Death (In Death #52) by J.D. Robb
Leonard and Hungry Paul by Rónán Hession
The Lost Apothecary by Sarah Penner
The Princess and the Rogue (Bow Street Bachelors #3) by Kate Bateman
Queen Move by Kennedy Ryan
A Question of Betrayal (Elena Standish #2) by Anne Perry