When George gets sleepy, he gets very, very sleepy. Especially if he’s just been having the zoomies. Yes, that’s my foot and No, it’s not moving. I have been officially incapussitated. 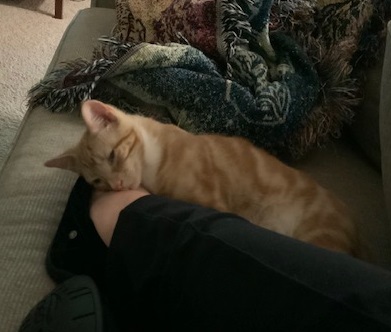 It’s a good thing that I have plenty to read, as evidenced by this week’s stack. All of these look like fun, but I’m especially looking forward to The Emperor’s Wolves by Michelle Sagara. It’s a side-story in her Chronicles of Elantra series, and I hope that it answers more than few burning questions. We’ll see. Also, I fully admit that I bought A Wizard’s Guide to Defensive Baking for the title. Because reasons. Hint, it’s definitely NOT a cookbook.

Any Rogue Will Do (Misfits of Mayfair #1) by Bethany Bennett
Burning Girls and Other Stories by Veronica Schanoes
East Coast Girls by Kerry Kletter
The Emperor’s Wolves (Wolves of Elantra #1) by Michelle Sagara
The Grove of the Caesars (Flavia Albia #8) by Lindsey Davis
A History of What Comes Next (Take Them to the Stars #1) by Sylvain Neuvel
It Is Wood, It Is Stone by Gabriella Burnham
Murder in Chianti (Tuscan Mystery #1) by Camilla Trinchieri
The Other Side of the Door by Nicci French
The Selah Branch by Ted Neill
Seven Years of Darkness by You-Jeong Jeong
These Women by Ivy Pochoda
A Thousand Moons by Sebastian Barry