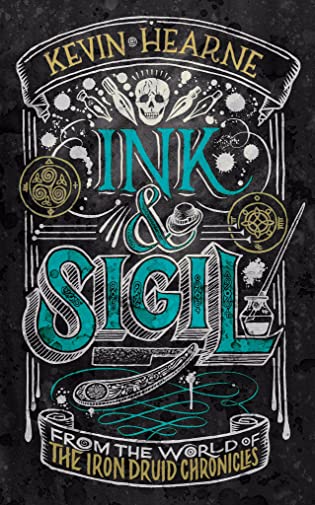 Al MacBharrais is both blessed and cursed. He is blessed with an extraordinary white moustache, an appreciation for craft cocktails – and a most unique magical talent. He can cast spells with magically enchanted ink and he uses his gifts to protect our world from rogue minions of various pantheons, especially the Fae.
But he is also cursed. Anyone who hears his voice will begin to feel an inexplicable hatred for Al, so he can only communicate through the written word or speech apps. And his apprentices keep dying in peculiar freak accidents. As his personal life crumbles around him, he devotes his life to his work, all the while trying to crack the secret of his curse.
But when his latest apprentice, Gordie, turns up dead in his Glasgow flat, Al discovers evidence that Gordie was living a secret life of crime. Now Al is forced to play detective – while avoiding actual detectives who are wondering why death seems to always follow Al. Investigating his apprentice’s death will take him through Scotland’s magical underworld, and he’ll need the help of a mischievous hobgoblin if he’s to survive.

I’ve read – actually mostly listened to – enough of the Iron Druid Chronicles to know that I love the series. Since I’m 2/3rds of the way through I figured I knew enough about the world created in the series to be able to get into Ink & Sigil. Al Mac Bharrais’ adventures take place in the same version of our world as Atticus O’Sullivan, but from a much different perspective.

Ink & Sigil is a sequel that isn’t a sequel, it’s more like a consequence. Which is an interesting way of launching a series. Also an effective way for new readers to get aboard this marvelous train. So you don’t have to have read the Iron Druid Chronicles to get into Ink & Sigil, but a taste for one will probably result in a yen for the other.

Al is none of the above. He’s 63, he’s getting creaky, and he’s all too mortal. (I would love to see Al meet Marley Jacob from A Key, an Egg, an Unfortunate Remark. They’d have a lot to talk about when it comes to kicking paranormal ass when you’re 60-something.)

Al isn’t exactly a wizard, and he’s certainly not a druid like Atticus. He is actually a kind of paper-pusher for the paranormal. His power is literally in paper – and especially in ink. He draws symbols of power with special ink on special paper, and that power affects whoever sees the symbols he has drawn.

Among many other useful things, he’s created his own version of the “psychic paper” that Doctor Who uses. The one that seems to be a universal high-ranking ID for wherever the Doctor wants to get into that he shouldn’t. In Al’s case, the paper just opens the mind of the person who sees it so that Al can plant the suggestion that he belongs wherever it is that he has just entered that he isn’t supposed to.

Like the apartment of his just-deceased apprentice. Gordie seems to have died of natural causes – depending on how one feels about raisins in one’s scones. Al has arrived in the middle of the police investigation into Gordie’s death to clean house of all of the fascinating, esoteric and sometimes illegal substances that sigil agents like Al and Gordie use to do their work.

Al expects to leave with a bag of inks and ingredients. What he finds in Gordie’s secret workroom changes his focus – as well as his opinion of the late and now entirely unlamented Gordie. Because Gordie was practicing things he hadn’t learned yet, and seems to have been breaking all the rules while doing so. And he had imprisoned a hobgoblin in a cage – a hobgoblin from one of the fae planes that he intended to sell to someone nefarious in this plane.

Which is illegal, immoral, and constitutes trafficking of the nasty kind that either leads to slavery or lab experimentation of the mad scientist variety.

Putting Al on the hunt for a mad scientist and at least one corrupt fae deity selling out her own kind for either fun or profit. That she’s selling them to the CIA adds a whole ‘nother level of crazy complexity to a case that is almost but not quite too much for Al and his friends to handle.

Making it a fantastic start to this series!

Escape Rating A+: I fell straight into this book and just didn’t want to leave. Possibly ever. This is one of those books that I just want to shove at everyone I know and hold them down until they read it.

In that vein, I really, truly don’t think you have to have read ANY of the Iron Druid Chronicles to get into Ink & Sigil. Not that you shouldn’t read them, they’re awesome. Howsomever, while these are set in the same world, Atticus is not a character in this series – so far – except for the scene where those of us who have read the Iron Druid Chronicles discover how Al ran into Atticus that one time and they had a nice dinner together. It doesn’t affect the plot of Ink & Sigil, it’s just a lovely scene IF you’ve met Atticus before and it’s still a lovely scene if you haven’t.

What one does need to buy into in order to get into Ink & Sigil is the concept that lies behind, or underneath, both the Iron Druid Chronicles and Neil Gaiman’s American Gods. The idea that the old cliche about humanity creating gods in their own image is the actual, literal truth. That belief creates the god rather than the god’s deeds creating the belief.

One of the things that I found marvelous was the character of Al MacBharrais, and just how much he and his companions play with just how many classic tropes from urban fantasy and even from the mystery detective genre from which it partially sprang.

Al is so different from the standard run of urban fantasy protagonists. I have a hard time saying Al is old because he’s the same age that I am, but he’s certainly no spring chicken. He’s led an already long and fairly hard-knock life. He can no longer serve as his own muscle – except in what is inevitably a very painful pinch – but he still needs an enforcer. Like Nero Wolfe needed Archie Goodwin. Or any other case where the “real” detective is no longer quite spry for one reason or another and needs someone to occasionally punch the bad beings where it hurts.

That Al’s version of Archie is a female battle-seer who does double duty as his printing firm’s manager and accountant sets all sorts of tropes on their tiny little heads. She’s great at both cooking the books and conking out their enemies. Also, Nadia’s wizard van is absolutely to die for. She’s also more than able and willing to help a few people – or things, or beings – die when they really, really need to.

The other really fun character in this one is Buck Foi the hobgoblin. The one that Al found in a cage in his dead apprentice’s apartment. When Al opens that cage he also opens up the whole case, and it’s Buck who tags along to help him close it. Because Buck needs the fae trafficking ring shut down in order to remove the price on his head. Buck is the comic relief, but it’s comic relief with one hell of an edge. (Buck reminds me a bit of P.B. from Laura Anne Gilman’s Retrievers series, which was also an awesome urban fantasy. I digress.)

But underneath the paranormal scene-setting, and Buck’s constant scene-stealing, the story is ripped from the headlines. Al’s case is to uncover a fae-trafficking ring, and it’s every bit as nasty as human-trafficking. It also seems to work in a surprisingly similar fashion. And it has to be stopped – and not just because the CIA (really, the actual CIA) is chasing after Al and his friends to silence them.

That Al manages to use some of his not-so-otherworldly connections to help the police shut down a couple of human-trafficking rings adds some real-world drama to this otherworldly story without being heavy-handed about the message. This stuff is evil and needs to be stopped. Period.

Shutting down this one, particular operation still leaves Al with plenty to do in subsequent books in the series. He still has to find out who dropped two seriously awful curses into his life, before those curses wipe out this cohort of his friends and colleagues. So he can keep Nadia and Buck around. So that he can finally manage to train an apprentice to mastery. So that he can talk to the librarian he’s been in love with for years and not have the curse make her hate him and the sound of his voice. As it did with his son.

So there is plenty for Al to be going on with in future books in this series. Hopefully soon!

Review: Written in My Own Heart’s Blood by Diana Gabaldon
Dearly, Departed

One thought on “Review: Ink and Sigil by Kevin Hearne”