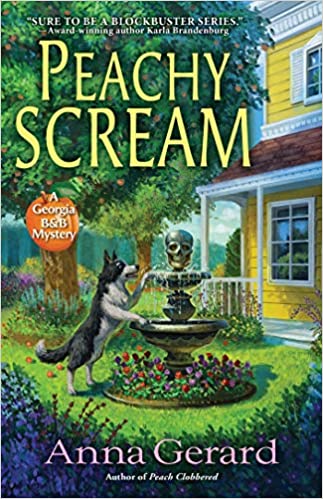 To die or not to die? Georgia B&B proprietor Nina Fleet struts and frets to bring the curtain down on a Shakespearean actor's killer.
It's nothing short of inevitable that Cymbeline, GA, hosts an annual Shakespeare festival. But stage-struck Nina Fleet is about to learn that putting on an amateur theatrical production can be murder. Nina's anticipating showbiz glamour and glitz when a community Shakespearean troupe arrives for a two-week stay at her B&B. But the lights dim when she learns the company's director is her nemesis, struggling actor Harry Westcott--who still claims to be the rightful heir to Nina's elegant Queen Anne home.
Meanwhile, the troupe members are not content to leave the drama upon the stage. Accusations of infidelity and financial malfeasance make a shambles of rehearsals. And then, two days into the troupe's stay, the lead actor is found dead in Nina's formal Shakespeare garden. Murder most foul!
Worse, it seems every member of the amateur troupe has a motive--including wealthy construction company owner Marvin Jeffers, who seems to have a personal interest in Nina. But when the sheriff arrests the supposed boyfriend of the slain actor's widow, Nina suspects that the wrong troupe member is in jail. She and her trusty Australian Shepherd, Matilda, join forces (none too happily) with Harry to sleuth out the murder plot.
Will they find the real killer before someone else shuffles off this mortal coil? Find out in Anna Gerard's delightful second Georgia B&B mystery.

The first book in this series, Peach Clobbered, was just the quintessential first book in a cozy mystery series. The location was marvelous, the characters were appropriately quirky, the dog was adorable and the mystery was properly twisty while the story had a lot of heart – and a superfluity (that’s the correct word, I looked it up) of surprisingly with-it elderly nuns.

I miss the nuns. (Now there’s a sentence I never expected to write!)

Not that Nina Fleet – and her still adorable dog Mattie – aren’t still operating the Fleet House B&B in lovely Cymbeline Georgia. And not that I still wouldn’t love to find the place that inspired it once travel is safe again.

But I miss the nuns. They brought something to the first book that isn’t present in the second one. Making Peachy Scream more of a typical cozy than one that stands head and shoulders above the rest.

The story in Peachy Scream is still plenty charming – although the murder victim certainly is not.

When Nina’s nemesis, jobbing actor Harry Westcott, returns to her B&B with a troupe of amateur Shakespeare players in tow, Nina is certain that Harry is up to something. Again.

After all, when Nina and Harry first met, it was over his lawsuit to vacate her ownership of his great-aunt’s house. The place that Nina had just bought and just started setting up as a B&B in touristy Cymbeline. Not that Nina didn’t buy the house fair and square, rather that Harry’s contention was that the seller had no rights to sell because his great-aunt promised to leave him the house in her will. Which she didn’t – or at least no such will has ever been found although I expect it to turn up at some point later in the series. (That is a guess on my part and not a spoiler. I could be totally wrong. Time will eventually tell. Hopefully.)

Still, Harry’s back and Nina’s suspicious. As she should be.

But Cymbeline, named for Shakespeare’s play, is just about to open its popular, profitable and annual Shakespeare Festival. Harry and his troupe are the contracted acting company for this year’s play, Hamlet. And every other possible place for the players to stay was booked long ago. The festival is very popular!

Which means that Nina, rightfully suspicious as she is, can’t afford to throw Harry out on his rather delectable ass. Not that she’s noticed. Much.

It’s clear to Nina from the moment that she is introduced to Harry’s troupe of players that, to quote the Bard, “Something is rotten in the state of Denmark,” or at least in the state of the company. When the man whom everybody seems to hate – including his trophy wife – turns up his toes in the middle of Nina’s Shakespeare garden, there’s a bushel of suspects, a peck of motives and no end in sight. But the show must go on. 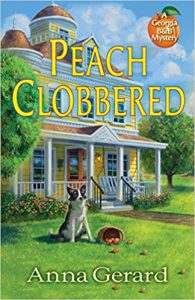 Escape Rating B: Anyone who has spent their school years being endlessly compared to an older sibling or cousin and always failing to measure up will understand my reaction to Peachy Scream. I absolutely loved Peach Clobbered and picked up Peachy Scream because I was hoping for more of the same – or hopefully even better – in the second book in the series now that the setting and characters had been established.

I just didn’t realize how much of the charm of the first book was owed to the nuns. Without them, Peachy Scream doesn’t have quite the same charm. It’s still a good cozy mystery, but the nuns made the first book rise in a way that this one doesn’t.

Not that the story doesn’t have its own charms. The troupe of players, their surprisingly convoluted relationships and the almost internecine warfare amongst them certainly adds plenty of drama to a scenario that is already fraught with it. After all, these are actors – albeit amateur ones – and drama is their natural state.

And the hidden agendas of the players make for an appropriate tipping of drama into melodrama, while the strange and strained relationship between Nina and Harry adds an element of farce.

There’s one element of the story that, while in some ways it’s done very well, in one particular aspect adds to some discomfort while reading. It was a common device in several of Shakespeare’s plays, for example in As You Like It, for the Bard to play with gender roles and gender stereotyping by having one or more female characters spend much of the play masquerading as male characters, with all of the dramatic and comedic possibilities for mistaken identities and misplaced affections on full display.

So the concept that one of the members of the troupe is a woman pretending to be a man fits right into the Shakespearean milieu that Cymbeline plays homage to with its festival.

But Nina’s reaction to discovering the possibility that the Chris that presents themselves as male may be female made for a very uncomfortable read. In 21st century terms, when this story is set, it is entirely possible that Chris is in transition rather than in disguise. Nina’s waffling about how to refer to Chris inside her own head, her seeming compulsion to hang herself up on knowing Chris’ gender felt so wrong that it literally dropped the grade of the book from a B+ to a B. The point where Harry just tells Nina to get over herself and use the gender nonspecific “they” in reference to Chris made ME heave a sigh of relief. And it should not have been necessary.

That being said, there was a lot about Peachy Scream to enjoy. The cast was even quirkier, in their own way, than the previous book. The town of Cymbeline is filled with a terrific bunch of folks, and while the Reverend Dr. Bishop, local minister, funeral home director and county coroner, wasn’t as much fun as the nuns; he was a fascinating character in his own right and I hope we see more of him in the series.

And Nina’s relationship with Harry, as weird as it already is, got even weirder at the end of the book. I’m terribly curious to see how THAT plays out in future books in the series!