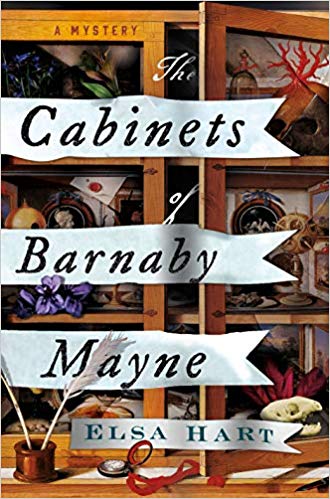 From the author of the acclaimed Li Du novels comes Elsa Hart's new atmospheric mystery series.
London, 1703. In a time when the old approaches to science coexist with the new, one elite community attempts to understand the world by collecting its wonders. Sir Barnaby Mayne, the most formidable of these collectors, has devoted his life to filling his cabinets. While the curious-minded vie for invitations to study the rare stones, bones, books, and artifacts he has amassed, some visitors come with a darker purpose.
For Cecily Kay, it is a passion for plants that brings her to the Mayne house. The only puzzle she expects to encounter is how to locate the specimens she needs within Sir Barnaby’s crowded cabinets. But when her host is stabbed to death, Cecily finds the confession of the supposed killer unconvincing. She pays attention to details—years of practice have taught her that the smallest particulars can distinguish a harmless herb from a deadly one—and in the case of Sir Barnaby’s murder, there are too many inconsistencies for her to ignore.
To discover the truth, Cecily must enter the world of the collectors, a realm where intellect is distorted by obsession and greed. As her pursuit of answers brings her closer to a killer, she risks being given a final resting place amid the bones that wait, silent and still, in the cabinets of Barnaby Mayne.

I adored this author’s Li Du series (start with Jade Dragon Mountain and prepare to be lost for several days), so when I noticed that she had moved from early 18th century China to early 18th century London for her latest, I couldn’t wait to see how that transition worked.

The fascinating thing about moving from Li Du to Cecily Kay and her former school friend Meacan Barlow is how strangely the two settings resemble each other. Li Du’s China in the early 18th century was a closed world – at least to the West. And Li Du is an outsider, an exiled imperial librarian on his way out of his own country.

The world of the scholarly, acquisitive, obsessive collectors of early 18th century London is just as much of a closed world, albeit in a completely different way. The collectors are a closed society, restricting membership, keeping all of their secrets locked up in their beautiful but often hidden presentation cabinets.

And Cecily and Meacan are also both outsiders to this world, which is exclusively male. They are both barely tolerated interlopers who exist on the fringes of this expensive and exclusive preserve.

Just like so many who are treated as outsiders in the worlds they inhabit, Cecily and Meacan are both keen observers of the situation in which they find themselves. They are ignored but intimate inhabitants of a world they are not believed to truly understand.

But of course they do. And frequently better than the men who are considered to be its prime movers and leading lights. Because they have no vested interest in maintaining the status quo – quite the reverse – they see situations and people with much clearer vision than the supposed cognoscenti.

And what they see is a confessed killer whose confession makes no sense whatsoever, and an investigation that is determined to pin the death of Barnaby Mayne on the most convenient suspect rather than seek out the real murderer – who must be one of the wealthy and influential collectors themselves.

A killer who is content to have the official investigation look elsewhere – but unwilling to countenance two amateurs poking their noses into his crimes.

Escape Rating A+: The world of the collectors was absolutely fascinating, just by itself. For context, this was the time period when the infamous Elgin Marbles were essentially looted from Athens and shanghaied to England.

While Lord Elgin’s looting of the Parthenon was on rather a grand scale, the society of collectors, of whom the late (and fictional) Barnaby Mayne was one of the leading lights, did the same thing, not quite on the same scale, all over the world.

Those that were capable went on their own expeditions of acquisition – or theft if you prefer – while others sponsored, basically, treasure hunters and tomb robbers to commit their thievery for them.

The entire concept manages to be both the start of the great museums we have today and utterly appalling at the same time.

As fascinated as I was by the setting for this story, it was Cecily and Meacan who really captured my attention and held it to the end. The way that their minds worked, and the way that they worked together to solve the murder, felt like it ripped the veil off of the usual portrayal of women of this period – a time period which borders on the Regency. Because in this story we see both how the men of this closed society – and the men of officialdom – see these two women and are able to contrast that with how they perceive themselves and the world around them..

On the one hand, they often play the roles that the world expects them to play. They are quiet and decorous and studying subjects considered fit for ladies – if barely. While on the other hand they see a great deal, know even more, and are caught in the position where they have to pretend to be one thing while secretly being another.

And while earning a living in Meacan’s case or maintaining a fragile independence in Cecily’s. They inhabit their era in a subversive way that allows us to see ourselves in them – and rail at the limitations they face.

The Cabinets of Barnaby Mayne manages to be both an atmospheric and immersive piece of historical fiction, every bit as meticulously detailed as the labels on Barnaby Mayne’s cabinets, while also giving us two marvelously drawn female protagonists in Cecily and Meacan. All wrapped around an intricately twisted mystery that holds the reader’s attention to the very end.

One thought on “Review: The Cabinets of Barnaby Mayne by Elsa Hart”