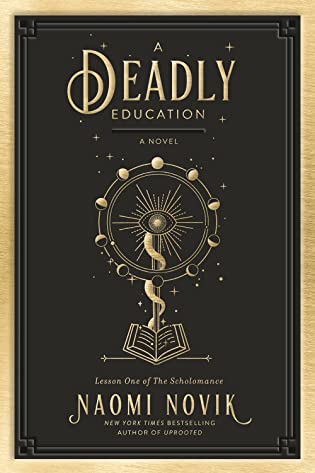 Lesson One of the Scholomance
Learning has never been this deadly
A Deadly Education is set at Scholomance, a school for the magically gifted where failure means certain death (for real) — until one girl, El, begins to unlock its many secrets. There are no teachers, no holidays, and no friendships, save strategic ones. Survival is more important than any letter grade, for the school won’t allow its students to leave until they graduate… or die! The rules are deceptively simple: Don’t walk the halls alone. And beware of the monsters who lurk everywhere. El is uniquely prepared for the school’s dangers. She may be without allies, but she possesses a dark power strong enough to level mountains and wipe out millions. It would be easy enough for El to defeat the monsters that prowl the school. The problem? Her powerful dark magic might also kill all the other students.

As an institution, Scholomance makes Hogwarts seem like a well-run – and safe – place to learn magic. As a story the Scholomance just plain kicks Harry Potter’s little adventures to the curb. And A Deadly Education – which it so very much is – is only the first book in what promises to be an absolutely epic series.

The comparisons to Hogwarts feel inevitable. And the Scholomance is definitely a series to read after Harry Potter – or perhaps instead, all things considered. But that inevitable comparison feels like it barely scratches the surface of what the Scholomance really is – if it touches it at all.

Hogwarts is dangerous because the students are learning magic, which is dangerous, and because the adults who are theoretically in charge are either pursuing their own agendas or just doing a really lousy job at running a school.

In the Scholomance, there are no adults. There are no teachers. The entire system is, in fact, dangerous by design. It’s intent is to weed out – read that as kill off – at least half of each incoming class before – or as – they graduate. The only exit from the place is either in a pine box or through a gauntlet of the toughest, meanest, nastiest, most vicious and bloodthirsty monsters ever to grace a nightmare.

Only the strong – or the magically well-connected – survive. The process is designed to teach the children of the elite how to be ruthless little Machiavellians, by throwing the magically talented hoi polloi in as servants and cannon-fodder.

In other words, underneath its magic and mayhem, its rules and its deprivations, this is a story about privilege. And it’s the story of one young woman determined to break the back of that privilege, not so she can come out on top – but so that she can survive with her soul intact.

Against every force that expects her to fail by either dying or turning into everyone’s worst nightmare – including her own..

Escape Rating A++: This story reminded me of so many things, most of them made awesome or awesomer by forming a piece of this marvelous, fantastic world.

We view the Scholomance, and by extension the world that produced it, through the eyes of Galadriel Higgins, a junior at the Scholomance. While El may be the heroine of this story, she’s not in any way a typical heroine. She’s more like an underdog, in a system that is designed to keep people like her permanently underdogs – right up until they get killed so that some Enclaver’s kid (read that as elite class) survives.

There’s something about El that puts people off. She knows it, and she’s reached the point in her life where she knows that the chill she sends up most people’s spines is something they’ll just have to get over when they realize just how awesomely powerful she is. In the meantime, she’s as sarcastic and rude as she can possibly be, so that no one tries to get close to her – where they can hurt her.

El is meant, destined by fate, to be the dark lady version of Galadriel the Elven Queen. The one who proclaims that “all shall love me and despair” right before she rejects the One Ring. Like Galadriel herself, El refuses to give in to all the power that fate has handed her to be destructive.

She reminds me of what Granny Weatherwax from the Discworld must have been like as a young woman. A young woman who was intended to be evil, but ended up being so sharply good that she cut everything in her path with that sharpness. Including, on more than one occasion, herself.

Something that El does to herself rather often.

But El is still young, and there’s still a soft gooey center under that prickly exterior. She wants to be liked. She wants to have friends. She’s just convinced that it can’t happen for her. And that she’ll die, if not of loneliness, than of all of the things that hide in the shadows of the Scholomance ready to consume any students who don’t have the protection of a pack, or a posse, or just, well, friends.

El, as the bad witch determined to be good, runs directly into the school’s hero, the young man Orion Lake, child of every privilege that El has never experienced in her entire life. Just as fate is determined to cast El in the role of the wicked witch, it’s determined that Orion will be the unthinking, self-sacrificing hero of every tale until he dies.

But he not only lives, he upsets the balance of the school. Because 50% or more of the students are supposed to die over the course of their education, and Orion Lake is saving many too many of them. There’s never quite enough food for the entire student body, and the monsters are so desperately hungry that they are breaking down the walls and wards that keep most of the students safe from the biggest and baddest of the lot.

I said that this is a story about privilege, and that concept underpins everything. The system is designed for the elite to survive, and the system keeps itself going by holding out the carrot that a few, select members of the underdog class can become elite if they are strong enough, brave enough and powerful enough – or if they are willing to abase themselves for their entire school career in the hopes that they’ll get lucky and survive the monsters’ graduation feeding frenzy.

El knows that her best chance of survival is to get herself attached to one of the elite Enclave groups, but she can’t do it. Not that she’s not capable of it, and not that it isn’t offered, but that she can’t let herself do it. She knows she should get herself into a situation where life will finally be unfair in her favor, as it is for the Enclavers, but she’s seen just how rotten that system is and she can’t make herself part of it.

Instead, she does her best to not merely expose it, but actually to subvert it, knowing that she’s asking people to examine the very air that they breathe and discover that it’s foul even though it’s supporting them not just fine but actually better than fine.

I can’t imagine that she’s going to succeed, but it’s going to be fun to watch her try. The second book in the series, The Last Graduate, looks like it will be out next year. Based just on the very last line of A Deadly Education, it’s going to be another marvelously wild ride. 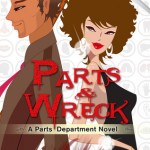