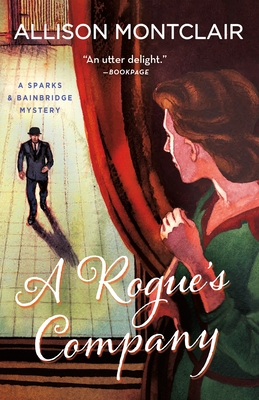 In Allison Monclair's A Rogue's Company, business becomes personal for the Right Sort Marriage Bureau when a new client, a brutal murder, two kidnappings, and the recently returned from Africa Lord Bainbridge threatens everything that one of the principals holds dear.
In London, 1946, the Right Sort Marriage Bureau is getting on its feet and expanding. Miss Iris Sparks and Mrs. Gwendolyn Bainbridge are making a go of it. That is until Lord Bainbridge—the widowed Gwen's father-in-law and legal guardian—returns from a business trip to Africa and threatens to undo everything important to her, even sending her six-year-old son away to a boarding school.
But there's more going on than that. A new client shows up at the agency, one whom Sparks and Bainbridge begin to suspect really has a secret agenda, somehow involving the Bainbridge family. A murder and a subsequent kidnapping sends Sparks to seek help from a dangerous quarter—and now their very survival is at stake. 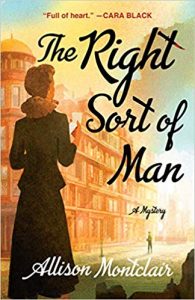 I’ve just realized that the title is a pun – or a spoiler, take your pick – on multiple levels. Iris Sparks, co-owner of the Right Sort Marriage Bureau, is keeping company with Archie Spelling, a known gangster. Quite willingly and fairly often.

Gwen Bainbridge, her friend and co-owner of the agency, very much on the other hand, has been forced to keep company with a gang of rogues because they’ve kidnapped her while she was in the unfortunate company – and unfortunately in the company – of her douchecanoe of a father-in-law, Lord Harold Bainbridge.

That Harold is a complete and utter rotter is not a spoiler at all. I think I rage-read the first half of this book because Harold’s douchecanoe nature and general all-around misogynistic asshattery is on display from practically the first page of the book.

I hated not just every scene the man was in but every time Gwen was forced to deal with the power the man had over Gwen’s – and every other person in the household’s – life. A power that he indulged to a disgusting degree at every possible turn as well as at plenty of turns that one wouldn’t have thought were possible, if only because he was willing to insult and demean everyone except his cronies in front of any audience at all. Going completely against that whole idea that one didn’t air one’s dirty linen in public.

Harold has power over Gwen because he had Gwen declared mentally incompetent when she was unable to maintain the proper British stiff-upper-lip in the face of her husband’s (Harold’s son’s) death during the late war. Along with that declaration, Harold captured custody of Gwen, her son Ronnie (his grandson) and all of the shares in Bainbridge Ltd., that his son left to his wife in his will.

And thereby hangs a good chunk of the tale. For Gwen, it’s all about little Ronnie, and not letting Harold send her 6-year-old boy off to the boarding school that his father hated and that turned his grandfather into the disgusting, overbearing ass that he became.

As Gwen grabs hold of her courage and her will and begins to finally fight back, she – with the aiding, abetting and more-than-able assistance of her partner Iris – puts her very superior brain to work to figure out what’s behind her consignment to her father-in-law’s clutches, along with exactly what’s behind his consignment to the clutches of his (their) kidnappers.

It’ll be the making of Gwen – if she survives. Even if calling in favors from her friendly neighborhood gangster puts Iris’ future happiness at risk. 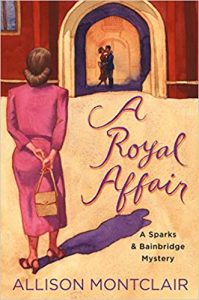 Escape Rating B+: I picked this up because I loved the first two books in this series, The Right Sort of Man and A Royal Affair. In the end, I loved this one too, but not as much as the first two because, well, see my comments about rage-reading the first half located above.

I’m starting to think I’m just allergic to stories that feature women caught in impossible situations because men are entitled assholes whether the jerks in question are actually titled or not. Gwen Bainbridge’s situation has always been a bit precarious vis a vis her titled, overbearing, petty dictator of a father-in-law, because he’s always held the whip hand in their relationship and seems to enjoy using it. Her husband – his son – died in the war and Gwen’s mourning of him did not exactly exhibit the stiff upper lip that Brits are known for. She was labeled as a “hysteric” and placed under the guardianship of her late husband’s family. Under the thumb of her father-in-law who threatens and demeans every single person with whom he comes in contact at every possible turn – including his grandson, Gwen’s 6-year-old son Ronnie. The dinner party scene with the toasts was particularly horrific in this regard – but it was just the latest in a continuing line of horrors in that household.

It’s not a surprise that both Sparks and Bainbridge, along with nearly every other person who comes into contact with the man, wants to commit some kind of mayhem upon his odious person. It’s only a surprise that it didn’t happen sooner – and more often.

I’m going to try to stop ranting now. It’s more difficult than I thought it would be. Gwen’s asshat-in-law has the same name as my ex-husband, so there might be a teensy bit of transference going on here.

This story isn’t about Gwen’s family troubles, although it certainly is about families, and troubles, and the trouble that we will put ourselves through for our families – or at least for the members of our family that we love.

Because the other half of this story starts out with a bit of a dilemma for Gwen and Iris. They have a new client – well of course they do, that’s the whole raison d’etre of the Right Sort Marriage Bureau after all. But their new client causes them to question a whole host of assumptions that they both had when they began their enterprise.

Their new client, Simon Daile, is African. Not a Brit who has gone to Africa to make a fortune – like the odious Lord Bainbridge – but a man from Africa who came to England to study agriculture and got stuck there during the war. He’s the first black client the agency has had, and they are surprised. Then they are surprised that they are surprised.

And finally, they figure out that they’ve been missing out on clients because they assumed that all their clients would be just like themselves. White. And that they need to throw their assumptions out the window, no matter how comfortable clinging to them might have been.

Their bit of soul searching feels like it’s handled reasonably well, at least right up until the point where Gwen’s bit of sixth sense about when people are lying to her kicks in. Because Mr. Daile is lying about something. Or she thinks he is. And she’s afraid that her intuition has gone off or is leading her astray because she’s uncomfortable. Which is logical, merely incorrect in this case. Also, that she’s just second-guessing herself because Lord Bainbridge does nothing but try his worst to make her feel small, incapable and lacking in pretty much everything at every turn. 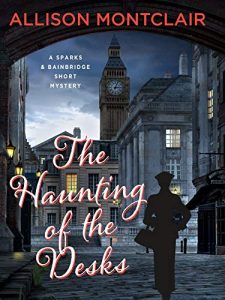 (Speaking of comfort, my soapbox is apparently a bit too comfortable. Moving right along AGAIN…)

It turns out that she’s both right and wrong, and that the wrongness ties into the mystery genre’s convention about coincidences. There are two threads to this story, Mr. Daile and the kidnapping of Lord Bainbridge and Gwen. Those threads connect – just not in any of the ways that Gwen – or the reader – might have initially suspected..

And Gwen rescues herself. Not just from the kidnapping, but from Lord Bainbridge. And it’s glorious! Now that she’s gotten THAT albatross off from around her neck. I have really high hopes for future books in this series! Meanwhile, I’m going to take a look at The Haunting of the Desks, a short story in the series that looks like oodles of fun!

Wrong Side of Hell
Trio Review: Beer and Groping in Las Vegas by Angela Quarles
The Edinburgh Dead

One thought on “Review: A Rogue’s Company by Allison Montclair”