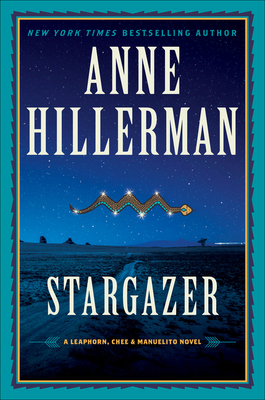 Murder, deception, Navajo tradition, and the stars collide in this enthralling entry in New York Times bestselling author Anne Hillerman’s Leaphorn, Chee & Manuelito series, set amid the beautiful landscape of the American Southwest.
What begins as a typical day for Officer Bernadette Manuelito—serving a bench warrant, dealing with a herd of cattle obstructing traffic, and stumbling across a crime scene—takes an unexpected twist when she’s called to help find an old friend. Years ago, Bernie and Maya were roommates, but time and Maya’s struggles with addiction drove them apart. Now Maya’s brother asks Bernie to find out what happened to his sister.
Tracing Maya’s whereabouts, Bernie learns that her old friend had confessed to the murder of her estranged husband, a prominent astronomer. But the details don’t align. Suspicious, Bernie takes a closer look at the case only to find that nothing is as it seems. Uncovering new information about the astronomer’s work leads Bernie to a remote spot on the Navajo Nation and a calculating killer.
The investigation causes an unexpected rift with her husband and new acting boss, Jim Chee, who’s sure Bernie’s headed for trouble. While she’s caught between present and past, Chee is at a crossroads of his own. Burdened with new responsibilities he didn’t ask for and doesn’t want, he must decide what the future holds for him and act accordingly.
Can their mentor Joe Leaphorn—a man also looking at the past for answers to the future—provide the guidance both Bernie and Chee need? And will the Navajo heroes that stud the starry sky help them find justice—and the truth they seek?

It’s not exactly a surprise – or a spoiler – for a mystery to open with the discovery of a dead body. But when that discovery is immediately followed by a voluntary confession to a circumstance that the police haven’t yet even determined is a homicide, well, that is kind of a surprise.

Although in real life the police would probably be thrilled to have a case wrapped up so neatly and tied with such a pretty bow, in mystery fiction that easy resolution could end the book – with 300+ pages or so left to fill.

So, the reader is pretty sure that there must be more to this story from the very beginning. Luckily, so is Officer Bernadette Manuelito of the Navajo Police. Once upon a time, when Bernie was in college, she and the confessed murderer were roommates, while the victim was the bilagaana lover who whisked her friend off to Hawaii for marriage, a son, and a later breakup.

It’s not that Bernie can’t imagine that her once-friend isn’t capable of murder, because after ten years on the force she knows too well that every person is capable of killing someone in the right – or wrong – circumstance. But THIS murder doesn’t match the person she knew.

Particularly as the confession is a bit threadbare, to say the least. The supposed murderer isn’t saying much of anything about either how or why – and the circumstances just don’t add up. But the circumstances do conspire to keep Bernie on the case, even though the crime was not committed on Navajo land and therefore not in Bernie’s jurisdiction.

She’s, not happy about driving back and forth the four hours between Shiprock and the county sheriff’s office in Socorro but she is more than a bit relieved to get away from her substation, where her husband, Sergeant Jim Chee, is currently also serving as the supervisor – and Bernie’s temporary boss.

Bernie and Chee need their captain to get back from his meetings in Window Rock before their marriage suffers any more stress than is normal for two cops married to each other. And Bernie wants to make sure that she does right by her old friend.

The more times that Bernie makes that long drive, the more certain she is that her friend’s convenient but threadbare confession doesn’t hold up to any examination whatsoever. But if the woman won’t help herself and tell the police – and Bernie – something, ANYTHING to make the whole thing make sense, the system is going to grind her under and spit her into prison whether she deserves it or not.

It’s up to Bernie to find the answers – to the crime, to her marriage, to her relationship with her mother and even to the future of her own career – on those long, solitary drives before it’s too late to fix any of the messes that she’s stuck in the middle of.

Escape Rating B+: I read this series because it’s a comfort read. It’s been a comfort read for decades at this point, as I started the series back in the 1990s when I had a really long car commute, and the then Leaphorn & Chee series written by the author’s father was one of the few things available in audiobook at my library. What a long, strange trip it’s been!

So I know and love these characters, and visiting them again is as comfortable as a warm pair of slippers – even if the case they end up investigating turns out to be considerably less warm and fuzzy. This week, when I wasn’t feeling all that great, I found myself searching out comfort reads – and lo and behold, here’s Bernie Manuelito, her husband the Cheeseburger, and the Legendary Lieutenant Leaphorn to see me through.

There are two threads to this story. The primary thread, of course, is the case. The second thread is the part where this being an ongoing series comes into play, as Bernie, Chee and even Leaphorn are all facing decision points, whether large or small, in their lives.

The case, although it’s a twisted mess, is the easy part. Or the easy-er part, anyway. It’s fairly obvious from the beginning that the confession doesn’t really solve anything. Partly because the book would end at that point if it were correct, but mostly because it doesn’t make sense, whether to Bernie or to the reader.

There’s no there, there. To the point where it was obvious, at least to this reader, that the woman confessed in order to protect someone else. The questions then become who is she protecting and why is she protecting that person? The protection was, as I said, obvious, but the who and the why weren’t nearly as obvious as they seemed. I bit down on that red herring pretty hard and didn’t manage to extract myself until close to the point where Bernie extracted herself.

And even then I was half right after all, making the mystery of this entry in the series not quite mysterious enough.

The parts of the story that deal with the life-decisions that the characters have to face were much more interesting – at least to this long-time reader of the series. Leaphorn’s decision isn’t all that earth-shattering, but Chee and Bernie are on the horns of some pretty big dilemmas, both together and separately.

It’s always Bernie’s decisions that interest me the most, because she’s the point of departure from the original series. And because she faces conflicts that neither of the men will ever have to. Bernie’s caught between her career, her marriage, and her love of and duty towards her aging mother. All of her decisions are hard, and they all impact each other, because they face in different directions.

So I love this series. Sometimes for the mystery, sometimes just to keep up with these beloved characters and their lives. Often a bit of both. I’m looking forward to my next visit to Four Corners, hopefully this time next year. And if you’re looking for a fresh take on a well-loved series, you can get hooked back into these characters and this place in Spider Woman’s Daughter, the marvelous mystery where the author picked up the threads that her father dropped and made them her own.