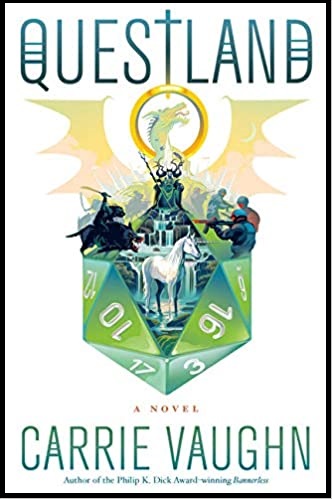 "Questland is a thrill ride…Richly imagined, action-packed, maximum fun." —Charles Yu, New York Times bestselling author of Interior Chinatown
YOU FIND YOURSELF IN A MAZE FULL OF TWISTY PASSAGES...   Literature professor Dr. Addie Cox is living a happy, if sheltered, life in her ivory tower when Harris Lang, the famously eccentric billionaire tech genius, offers her an unusual job. He wants her to guide a mercenary strike team sent to infiltrate his island retreat off the northwest coast of the United States. Addie is puzzled by her role on the mission until she understands what Lang has built:  Insula Mirabilis, an isolated resort where tourists will one day pay big bucks for a convincing, high-tech-powered fantasy-world experience, complete with dragons, unicorns, and, yes, magic.   Unfortunately, one of the island's employees has gone rogue and activated an invisible force shield that has cut off all outside communication. A Coast Guard cutter attempting to pass through the shield has been destroyed. Suspicion rests on Dominic Brand, the project’s head designer— and Addie Cox's ex-boyfriend. Lang has tasked Addie and the mercenary team with taking back control of the island at any cost.   But Addie is wrestling demons of her own—and not the fantastical kind. Now, she must navigate the deadly traps of Insula Mirabilis as well as her own past trauma. And no d20, however lucky, can help Addie make this saving throw.
“Gamers rejoice! Carrie Vaughn has conjured up a fun and fast-paced story filled with elves, d20s, and Monty Python riffs.”—Monte Cook, ENnie Award-winning creator of the Numenera roleplaying game

If you’re a fan in the real world, it’s possible (again) to go to Hobbiton and visit a bit of the Shire. All you have to do is go to New Zealand, where they’ve turned the movie sets from the Lord of the Rings into a tourist attraction.

You may be able to see the sights, but you can’t actually insert yourself into the story except in your own head. You can eat a meal but you can’t spend the night. The immersion can only go so far.

But if that description makes your head spin with possibilities, you’re not alone. And that’s what the original project to build Insula Mirabilis was all about. Creating a place where well-heeled travelers could spend days or weeks not just observing a fantasy world but actually living it.

Complete with mythical creatures – like unicorns and wargs – running around and occasionally even running from each other. And there would be magic – at least in the Arthur C. Clarke sense of “any technology sufficiently advanced is indistinguishable from.”

All in the service of allowing people to live out their dreams of living in a fantasy world. At least for a little while.

A rich tech wizard has created Insula Mirabilis to provide as many dreamers and geeks and nerds and LARPers and members of SCA as possible a place to live their dreams by paying him big bucks for the privilege. But the real purpose is for his crack engineering teams to rise to greater and greater inventive heights, providing him with lots of patents and trademarks and even more ways to make even more money.

But it’s all gone wrong. Or at least it looks that way. The island has cut itself off from the rest of the world with some kind of forcefield. Nothing going out – not even telecommunication – and nothing and no one going in, something that the Coast Guard has discovered to their loss.

Harris Lang, that rich tech wizard, has put together a team to sneak into his island and get it back for him. The team consists of four mercenaries and one very much out of her depth literature professor.

But Addie Cox has all the tools they need to figure out what went wrong and why. She’s an expert on the original sources that form the backbone of epic fantasy. She’s an avid player of D&D and a member of SCA.

Addie’s geek credentials aren’t the only thing she has going for her – and they’re not the only thing that Harris Lang is counting on, either. Because he’s planned much better than that. Addie is his ace in the hole, because Lang is pretty certain that the engineer who has gone rogue on HIS island is Addie’s ex-boyfriend.

And that the man will be unable to resist trying to impress Addie in the hopes of getting her back.

Escape Rating A-: This story feels like it exists on two levels. On the surface, there’s, well, the surface. Which is an adventure tale about exploring the island resort in order to figure out what’s gone wrong.

And on the other level, the story is one gigantic in-joke. If you love epic fantasy and role-playing games and everything that goes along with them, you’ll get the joke and enjoy the story. If you don’t, I’m not sure whether the story is strong enough to carry the reader over. I can’t tell because this is a joke that I very definitely got, as epic fantasy has formed a pretty big share of my reading since I first picked up The Hobbit. When I was 8. In OMG 1965. That’s a long time in which to read a lot of fantasy.

Which means that I had a great time in Questland. But I felt like I got all the in-jokes, and understood all the references. And kept thinking up more as I went along.

This turned out to be a story where I kept discovering more and more books and movies that it reminded me of the longer I got into it. Like one or two on every page. A lot of people are going to say Ready Player One because they share that nostalgia factor, but that didn’t feel like the primary influence to me. For that to work, James Halliday would have to have been the founder of Innovative Online Industries. In other words, the inventing genius would also have to be kind of evil.

It’s a lot more like Westworld in that the resort, which is also the gamespace, is mostly a work of mechanical engineering rather than the genetic engineering of Jurassic Park. Although the two books that Questland made me think of way more than anything else are both rather obscure, Sherri Tepper’s first novel King’s Blood Four, where the game is the world is the game, and Jean Johnson’s The Tower, where the protagonists are playing a live action role-playing game as entertainment for others – with very high stakes.

Your reading mileage may definitely vary, and there are hints of plenty of other books, games and movies if you squint a bit.

But at the center of it all is Addie Cox. While the mercenary team that takes her to the island does all of the physical heavy lifting on the trip, Addie is the one carrying all of the emotional baggage. Not just because the rogue wizard at the heart of the maze is her ex, but because Addie is the survivor of a school shooting. (She’d fit right in with The Final Girl Support Group). Traveling with a bunch of mercenaries with guns is way outside what comfort zone Addie has left.

That the team makes it clear that they think she’s useless does not help any of her issues, because she agrees with that assessment. The way that she refers to her uselessness is one of many, many references to Dungeons and Dragons and lots of other geekery.

That the story is her journey, her putting all of her knowledge to use to not just figure out the puzzle but also suss out who the monster is at the heart of this maze helps Addie change her perception of herself from being an unskilled and useless “Bard” character to become someone skillful and important and necessary for the quest, no matter what part she seems to play.

So come to Questland for the nostalgic geekery, but stay and enjoy for the very human story.