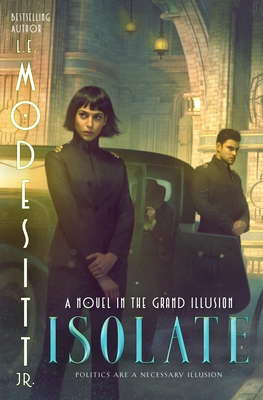 L. E. Modesitt, Jr., bestselling author of The Mongrel Mage, has a brand new gaslamp political fantasy Isolate.Industrialization. Social unrest. Underground movements. Government corruption and surveillance.
Something is about to give.
Steffan Dekkard is an isolate, one of the small percentage of people who are immune to the projections of empaths. As an isolate, he has been trained as a security specialist and he and his security partner Avraal Ysella, a highly trained empath are employed by Axel Obreduur, a senior Craft Minister and the de facto political strategist of his party.
When a respected Landor Councilor dies of "heart failure" at a social event, because of his political friendship with Obreduur, Dekkard and Ysella find that not only is their employer a target, but so are they, in a covert and deadly struggle for control of the government and economy.
Steffan is about to understand that everything he believed is an illusion.

Although good people in government can do their best to walk the tightrope, to do the best job they can for most people most of the time. If they devote their lives to it and are even willing to give those lives in order to do the most good for the most people most of the time – even in the face of those same people not recognizing that it’s being done while resenting that it isn’t being done nearly fast enough..

In other words, this is a political story, told through fascinating characters. It also reads like a story about how to potentially stage a coup from the inside – and how to stop it. That could just be reading the real-life present into the opening salvo in what I hope will be a long and fascinating series. But the interpretation feels right to me and your reading mileage may vary.

So Isolate examines the dirty business of politics, as seen through the eyes of someone with an intimate view of just how the sausage is made, as the saying goes, and finds himself on the inside of an attempt to make it better. Or at least tastier for considerably more people than is currently the case.

(Speaking of not being able to put this down, readers should be aware that the count of 608 pages is a serious underestimate. It’s 15,000 kindle locs. I know there’s not a direct translation from locs to number of pages, but as an example, Jade City by Fonda Lee, which is awesome, BTW, is 560 pages and 7684 kindle locs. No matter how loosely you do the math, based on my reading time Isolate is more likely 806 pages, or more, than it is 608, unless they are very large pages and the print is very, very small. It is absolutely worth reading, I loved every minute, but it will take more time than you might think it will from the page count.)

I recognize that I’m all over the map in this review. There is a lot to this book, and it’s one that made me think quite a lot as I was reading it.

As I said earlier, there were quite a few points where it felt like a story about how to stage a coup from the inside – and how to stop it. At first, I thought that those currently in power were setting up the kind of coup that nearly happened in the U.S. after the election, but it didn’t get to quite that level of skullduggery – not that there wasn’t plenty but it didn’t go quite that far in quite that direction.

But there’s also an element that the forces of “good” or at least the forces we follow and empathize with the most, are staging a coup from inside the government but outside of real power to make change. That feels kind of right, but as it’s handled in the story it’s legal and on the side of the “angels”.

While never glossing over the fact that politics is a dirty business, and even those on the side of the “angels” sometimes have to get their hands dirty – even if by proxy.

Escape Rating A+: What made this story work for me was the way that it completely embodied its political discussions and political maneuvering in its characters. There’s a lot of necessary exploration and explanation of what government can and can’t, and should and shouldn’t, do for its people, in this country that reads just enough like ours – or Britain – to feel relevant without feeling so close that it ends up being either a political treatise or a work of alternate history. 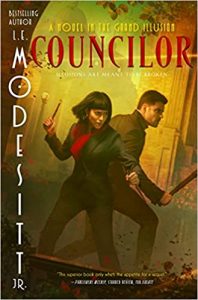 Instead, it ends up being the story of three people doing the best that they can to help their country in spite of everyone who tries to get in their way. In the process, they all rise above the place they expected to be, and that’s just the kind of story I love to sink into.

It takes a bit to get the reader firmly ensconced in this world with these characters, but once it does, it’s riveting. And it ends, not so much with triumph – although that element is there – but with the sure and certain knowledge that Steffan, Avraal and Obreduur have plenty of work left to do. They’re eager to get started, and I’m eager to read what happens next in Councilor, due in August 2022.