Before the announcement on January 19, the hope was that Apple’s iBooks Author program would somehow kick Amazon where it hurts. Assuming that anyone can find a location that actually causes Amazon any monetary angst, that is – hunting expeditions for this locale have so far been unsuccessful.

A publishing platform that would make ebook creation easier for the educational market was another “Holy Grail” that some pundits hoped that Apple was about to tackle. I had heard some theorizing that Apple was going to “revolutionize” ebook textbook publishing with the announcement.

And it did, but not in the way that anyone had expected.

By now, you may have heard the chatter (samples here, here and here) about Apple’s Author End-User License Agreement (EULA) for producing books (iBooks) with their new program. If an author wants to be recompensed for the blood, sweat and tears they have put into their book, and they want to create it using Apple’s new program, which is supposed to be so cool, they have to be willing to sign over exclusive, absolutely exclusive, distribution rights to their work, forever. Not for a period of time, but forever. Authors can’t even sell their books on their own sites.

Now if authors want to give the book away, they can distribute it wherever they like. 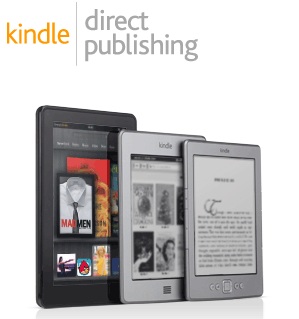 Some people wanted Apple to give Amazon a poke in the eye with a sharp stick. Why? Because of Amazon’s Kindle Direct Publishing program, also known as Kindle Digital Selects. As a librarian, I have some issues with the program, because the public face of this program is the Kindle Owners’ Lending Library, where Kindle Owners can, well, borrow an ebook from Amazon without buying it. Just like at their local library.

But from the authors’ side, this appears to be a way better deal than Apple. A very detailed analysis of the pros and cons from an author’s perspective was written by Carolyn McCray and posted at Publishing Perspectives. There have also been some recent sales statistics made available by Amazon at Digital Book World showing that there is a positive ripple-effect to participation in the program, because it includes promotion on Amazon’s Kindle Daily Deal mailing, which has pretty big circulation.

Authors want their books to get read, and they want to be fairly compensated. Whatever one might think about Amazon’s practices, or what they might morph into in the long-term, in the short-term, there are reports that indicate those goals are being accomplished.

And Amazon doesn’t expect a lifetime commitment when authors sign up. 90 day exclusivity may not be for everyone, but it is a much shorter term than forever. No matter how you count the days.

But a lot of people are more worried about the long-term than the short-term. Amazon is playing a very long game. As a recent NPR story put it, Amazon’s tactics are seen as ‘predatory’, because Amazon is not just an extremely huge bookseller, but they are also a publisher. Not just an ebook publisher, but a print publisher. They have more clout in more places in the publishing and bookselling business than anybody. Ever.

People were hoping that Apple’s announcement on January 19 would stick Amazon where it might hurt.

Instead, we have a situation resembling the one in J.R.R. Tolkien’s The Two Towers. On the one side, the dark tower of Amazon, with their huge distribution network and their “predatory” practices and their consumers locked-in to their Kindles.

On the other side, we have the white tower of Apple, signing their authors into permanent contractual servitude, telling eager potential iBook textbook creators that if they want to use the cool Apple product they either have to give their work away for free or they have to let Apple own the rights to their work forever.

And in the middle, us poor consumers, hunkering down while the electronic salvos fire overhead.

Remember that in Tolkien’s story, the white tower didn’t turn out to be any less self-serving than the dark tower once the truth was revealed. White just turned out to be the new black.

When I heard the news about Steve Jobs last night, I was reading a book. On my iPad. My husband found out because he was checking blogs. On his iPad. What did I do when he told me? I looked for an authoritative news source. I checked wired.com–on my iPad.

Yes, we’re geeks. But that’s not the point. A year ago, we would have been in front of separate computers, checking the net from desktops. Or maybe laptops. And yes, one of the laptops is a MacBook Pro. Not mine. But the iPad changed that. The iPad made it convenient to curl up with a good book. One that also lets you surf the net and play some really cool games.

All the Apple origin stories that have been repeated in the past 24 hours have reminded me of some library computing origin stories. The first three “computers” to make their way into any public library were generally an OCLC terminal, a CLSI terminal, and an Apple II computer, usually in the Children’s Area. Not necessarily in that order. The Apple II was the only real computer of the three. Think of how far we’ve come!

The comment is so often quoted, “If I have seen further it is only by standing on the shoulders of giants.” Sir Isaac Newton said it first, ironically a man who is one of the giants on whose shoulders modern science stands.

Steve Jobs was a giant.