Yesterday, we packed up for a week’s trip to Atlanta to look for a house to rent.  This was a driving trip, and we’re here for a week.  Two geeks, one car, and a week away from all our toys. 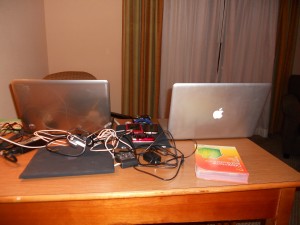 After we loaded up the car, I realized that we had packed more technological gimcrackery than we had clothes.  This says something about what we now define as the necessities of modern life,  and certainly that neither of us are exactly fashion plates.

Besides this blog, I am also working on a proposal to do a collection development workshop.  For serious work, I need a real computer, not just my iPad.  So, that’s one laptop.  Galen has his laptop, since he’s here to attend and present at the Evergreen Conference, and his MacBook is his work computer.  That’s two laptops.  I have a mouse, resting on a PLA in Portland (2010) mousepad that I’ve been traveling with since 2008.

But I still have my iPad.  I need my iPad for reading.  It’s my library away from home.  And, Galen also has an iPad with his traveling library.  That’s two iPads.  He has an iPhone, for work.  I have an iPod, for audiobooks.  I also have an old cellphone, because I’m not going to invest in an iPhone at this point until we move.  So five mobile devices of some sort.

Two digital cameras, his and hers.  We have to strive not to abandon either of them in the hotel room as we leave.  At least one of Galen’s prior digital cameras met its fate this way.

And all of the power cords these beasts require.  Which tangled up in my briefcase and committed spaghetti on the way up.  At least this particular hotel room has enough power outlets.  The room at the PLA conference in Portland didn’t, and I had to buy a power strip before dinner.  The toys ate before we did!

We can’t be the only people who travel this way.  It will be geek nirvana (nerdvana) when its possible to request a hotel room with a double-facing desk with two chairs and six outlets at table height.  Come to think of it, is six power outlets even enough?