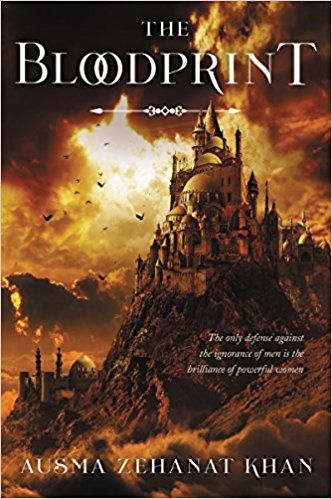 A dark power called the Talisman has risen in the land, born of ignorance and persecution. Led by a man known only known as the One-eyed Preacher, it is a cruel and terrifying movement bent on world domination—a superstitious patriarchy that suppresses knowledge and subjugates women. And it is growing.

But there are those who fight the Talisman's spread, including the Companions of Hira, a diverse group of influential women whose power derives from the Claim—the magic inherent in the words of a sacred scripture. Foremost among them is Arian and her apprentice, Sinnia, skilled warriors who are knowledgeable in the Claim. This daring pair have long stalked Talisman slave-chains, searching for clues and weapons to help them battle their enemy’s oppressive ways. Now, they may have discovered a miraculous symbol of hope that can destroy the One-eyed Preacher and his fervid followers: The Bloodprint, a dangerous text the Talisman has tried to erase from the world.

Finding a copy of The Bloodprint promises to be their most dangerous undertaking yet, an arduous journey that will lead them deep into Talisman territory. Though they will be helped by allies—a loyal ex-slave and Arian’s former confidante and sword master—both Arian and Sinnia know that this mission may well be their last.

If the Taliban and The Handmaid’s Tale had a hate child, it would be The Bloodprint. Yes, I mixed my metaphors, but it feels correct. And if after reading The Bloodprint there is anyone who does not mentally link the Talisman of the book with the Taliban of real life, I’ll eat my virtual hat.

The Bloodprint is an epic fantasy that feels very definitely part of the grimdark movement. It’s a very grim story, and the world that it portrays is in that terrible place where things are always darkest just before they turn completely black.

And although our protagonists are pursuing that one last ray of hope and light before all is extinguished, by the end it just feels as if all is lost.

The interesting thing about The Bloodprint is that it is, for the most part, a heroine’s story. The characters with agency are all female, and the defenders of the light are a female order of wise women and warriors. The story passes the Bechdel-Wallace test within the first page.

And that seems fitting, because so many of the victims of the darkness that has taken over this world are also female. Women without husbands or children are automatically sold into slavery. And the slave trade is so lucrative (or something even more nefarious) that the men of entire villages are wiped out just so that their surviving wives and daughters can be sold into slavery.

That’s not all that’s wrong. The Talisman, the villainous empire of our story, are systematically wiping out all books, all writing, and anyone who has the ability to write. Our heroes refer to the time that they live in as the “Age of Ignorance” because of this systematic erasure. And the parallels to the real-world Taliban, both in their treatment of the historical record and their treatment of women, feels screamingly obvious.

One of the foundations of the side of the light are its scriptoriums. And its relentless need to pass on any and all knowledge by oral as well as written tradition. Because there’s a reason for all of this erasure of history.

Writing, or at least a particular piece of writing called the “Claim”, is magic. And those who can wield the magic of the claim are extremely powerful. And rare.

Arian is our heroine, and one of the women who can wield the magic of the Claim for both offense and defense. She is a leading member of a legendary sisterhood, and she is tasked with the duty of retrieving a mythical original manuscript of the Claim, in order to bring about the end of the Talisman.

No such quest is ever conducted alone. Arian has companions on her journey, a guardian from her sisterhood, the man who loves her but whom she of course cannot have, and a child she rescues who will probably turn out to be the key to the whole thing at some future point. (I do not know this at all, I merely speculate.)

But equally, no such quest is ever undertaken without grave risk. Arian’s problems begin within the walls of her own sanctuary, as the leader of her order seems to be pursuing a separate, and possibly inimical, political end of her own.

Arian is uncertain whether or not she has been betrayed before she even begins. But as her journey continues through the devastated lands, she discovers that there are more forces arrayed against her than even she imagined in her darkest hours.

And that things are indeed always darkest just before they turn completely black.

Escape Rating B-: I have some mixed feelings about this book. There are some parts of the story that I really liked, and some that left me completely puzzled.

I love the idea of this in a whole bunch of ways. I really liked that the story begins as a buddy-story, with both of those buddies being women. And that our initial antagonist is a woman as well. There is absolutely no reason that any story can’t have women taking on a whole bunch of the roles that men regularly do. Hero, savior, villain, companion.

I also found it interesting that the male character in the story, while he is powerful in his own right, also takes on some of the roles that usually fall to women. This is Arian’s story and Arian’s quest and Daniyar is the one following her while she leads both the party and the story.

I was also fascinated by the way that this story is rooted in an entirely different mythical background than the Norse and/or Celtic mythologies that so often dominate epic fantasy.

But it was difficult to get into the story. At the beginning, it felt like a lot had already happened, and that somehow I’d missed. It. In the end, the impression I’m left with is that The Bloodprint felt like the middle book of a trilogy, even though it isn’t. When the story begins, we’re in the middle of action that has been going on for years. The situation is already desperate. And there’s positively oodles of backstory between not just Arian and her companion Sinnia, but between Arian and Daniyar, and especially between Arian and Ilea, the leader of her order. Backstory and context which readers scramble to assemble from the clues left by the characters’ thoughts and actions.

And the world has already gone completely to hell in that handbasket and it doesn’t look salvageable. Arian’s quest has the feel of a “Hail, Mary” pass, one of those million-to-one shots that only succeed in epic fantasy and the Discworld.

But it also feels like a middle book because the narrative trajectory heads downward. Things start out bad, get steadily worse, and we end on a horrible cliffhanger with the fingers being stomped on. Things began grim and ended grimmer.

On my other hand, the final 25% is absolutely compelling page-turning reading. I could see the end coming, I knew it was probably going to be horrifying, and I could not stop myself from racing to get there as fast as I could.

In the end, The Bloodprint is compelling but very, very dark epic fantasy. I’m very curious to see how our heroines get out of the very hot frying pan they’ve landed in, and how much hotter the fire underneath will turn out to be. 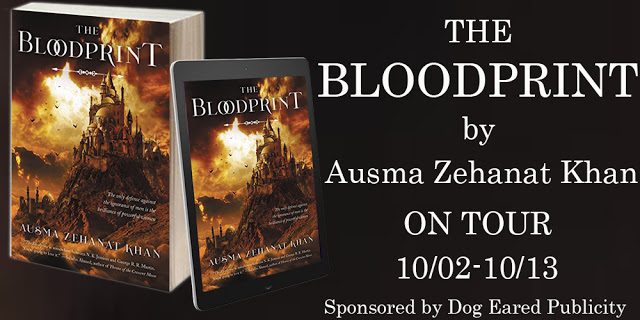