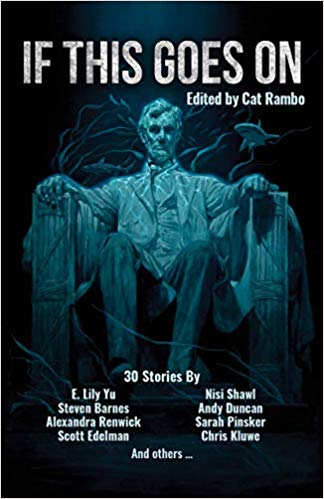 A bold new anthology born of rage and sorrow and hope. 30 writers look at what today's politics and policies will do to shape our world a generation from now. Some of today's most visionary writers of science fiction project us forward to the world of the future; a world shaped by nationalism, isolationism, and a growing divide between the haves and have nots. This anthology sits at the intersection of politics, speculative fiction, and American identity. The choices we make today, the policies of our governments and the values that we, as people, embrace are going to shape our world for decades to come. Or break it. Edited by Cat Rambo, the current President of the Science Fiction and Fantasy Writers of America, the stories of If This Goes On invite you to worlds very like this one-- but just a little different.

Table of contents:Green Glass: A Love Story by E. Lily YuTwelve Histories Scrawled in the Sky by Aimee OgdenDead Wings by Rachel ChimitsWelcome to Gray by Cyd AthensThe Stranded Time Traveler Embraces the Inevitable by Scott EdelmanGood Pupils by Jack LothianAll the Good Dogs Have Been Eaten by Gregory JeffersThe Sinking Tide by Conor Powers-SmithMustard Seeds and the Elephant’s Foot by Priya SridharMr. Percy’s Shortcut by Andy DuncanA Gardener’s Guide to the Apocalypse by Lynette MejíaBut for Grace by Hal Y. ZhangHurrah! Another Year, Surely This One Will Be Better Than The Last; The Inexorable March of Progress Will Lead Us All to Happiness by Nick MamatasThe Last Adventure of Jack Laff: The Dayveil Gambit by Steven BarnesThree Data Units by Kitty-Lydia DyeOne Shot by Tiffany E. WilsonKing Harvest (Will Surely Come) by Nisi ShawlCounting the Days by Kathy SchilbachMaking Happy by Zandra RenwickThe Machine by Chris KluweThat Our Flag Was Still There by Sarah PinskerThe Editor’s Eyes by Calie VoorhisFree WiFi by Marie VibbertDiscobolos by James WoodFine by Jamie LackeyBulletproof Tattoos by Paul CrenshawCall and Answer by Langley HydeA Pocketful of Dolphins by Judy HelfrichTasting Bleach and Decay in the City of Dust by Beth DawkinsThe Choices You Make by Sylvia Spruck Wrigley

I picked this up around the same time I received Cory Doctorow’s Radicalized to review for Library Journal. Just from the descriptions, it seemed that these two books either springboarded off the same event, were in dialog with each other, or both. (This is also a giant hint that if this book interests you that one will too!)

They’re not exactly in dialog with each other, but they certainly arose out of the same event – the 2016 election. Both are wrapped around the question about what the state of the US – and by extension the world – will be in the future if the hateful politics and policies that were given voice and force by the election of 45 continue into the future relatively unchecked.

That premise is explicit in If This Goes On, and implicit in Radicalized, but it is definitely there in both books.

They are very different collections, however. Radicalized consists of four novellas by a single author, where If This Goes On is a collection in the broader sense, of relatively short stories by 30+ authors around the single theme.

A theme that the collection is screaming about – loudly and with metaphorical expletives. As far as the authors and editor are concerned (and this reader) the policies of those elected in that mess are undoing much of the good that the US has done and are making both the country and the world into a worse place than it was.

None of the writers want the situation to continue – and have done science fiction’s usual excellent job of extending the present out into the possible, even plausible, end point of the contemporary mess in order to show just how awful things can be.

In the hopes that we will band together and do something about it before it is too late.

Escape Rating B+: My feels are all over the place on this one.

First, because it bothered the hell out of me and presumably will other people, the title of the collection sounds familiar because it is. If This Goes On— is the title of a novella by Robert A. Heinlein, a novella which would itself feel at home in this collection.

Whether the title of the collection is in homage or not, there is still plenty of resonance between the two.

This is not a collection to be read late at night, particularly with only the light of one’s screen to push back the darkness. Because there’s plenty of darkness in these stories. While some of them border on horror in the traditional sense, most of the stories give the reader the sense that they are looking at something horrible. And I was appropriately – and shudderingly – horrified.

There is some humor in some of the stories, but it is primarily humor of the “gallows” persuasion. These futures are all bleak in one way or another. While the stories themselves are excellent, the overall tone is fairly dark.

Each story is followed by an editor’s note that tends to hit that dark tone over the head with a baseball bat. The stories generally speak for themselves so that repeated emphasis felt a bit like being bludgeoned with the point of the collection – over and over again. I was already metaphorically bleeding so this was a case where the beatings didn’t need to continue until morale improved because it wasn’t going to happen. But there’s something about the reference to that t-shirt saying that seems appropriate just the same – possibly because hearing the news these days does feel a bit like that proverbial beating.

As much as I agreed with the authors’ and the editor’s perspectives, I’ll admit to getting tired of having it beaten into my head over and over again. YMMV.

These stories stand on their own. Sometimes swaying in the wind from the apocalypse, but they do stand. And the collection is well worth reading. If you read nothing else from this collection, look for Mustard Seeds and the Elephant’s Foot by Priya Sridhar – it’s lovely.

As the saying goes, in reference to the collection as a whole, “Read ‘em and weep.”