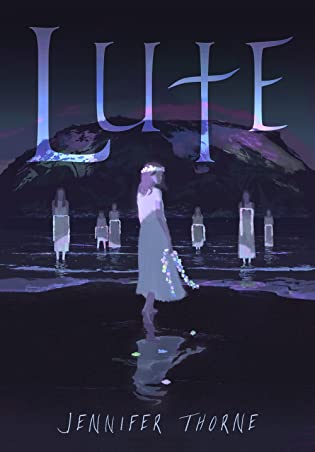 Wicker Man meets Final Destination in Jennifer Thorne's atmospheric, unsettling folk horror novel about love, duty, and community.
On the idyllic island of Lute, every seventh summer, seven people die. No more, no less.
Lute and its inhabitants are blessed, year after year, with good weather, good health, and good fortune. They live a happy, superior life, untouched by the war that rages all around them. So it’s only fair that every seven years, on the day of the tithe, the island’s gift is honored.
Nina Treadway is new to The Day. A Florida girl by birth, she became a Lady through her marriage to Lord Treadway, whose family has long protected the island. Nina’s heard about The Day, of course. Heard about the horrific tragedies, the lives lost, but she doesn’t believe in it. It's all superstitious nonsense. Stories told to keep newcomers at bay and youngsters in line.
Then The Day begins. And it's a day of nightmares, of grief, of reckoning. But it is also a day of community. Of survival and strength. Of love, at its most pure and untamed. When The Day ends, Nina―and Lute―will never be the same.

Hugh Treadway has every intention of going right on and having his cake and eating it, too. As this story begins, Hugh plans to continue having all the privileges and reaping all the benefits of being the Lord of Lute island, just as he always has, but Lute has other plans.

Which means that this is not his story – even though it should have been. Because Lute seems to have had enough of him dancing the dance but unwilling to take the chance of having to pay the piper.

Every seven years, on the longest day, the day of the summer solstice, the island of Lute takes seven people. They die. It’s not necessarily a gruesome death – or even a painful one. Often it’s an accident. But the island, or the spirits that dwell within, choose who will pay that piper among those present on the island on The Day.

And in return, Lute enjoys prosperity – no matter how well or how poorly the economy of Britain, or even the entire world, happens to be doing. The weather is milder and even sunnier than anyone has a right to expect. There’s always enough food and no one goes hungry. Lute takes care of its own and its people take care of each other. And there’s peace – even in the midst of war.

Lute has the only war memorial in Britain with no names on it. No Lute resident has ever died in any war her country has fought. EVER.

But in return, she takes seven people every seven years – one for each of those years of peace and prosperity. Long, long ago, the people of Lute made a bargain with the Shining Ones, the Tuatha dé Danann, and that bargain is kept. Or so the legend goes.

American-born Nina Treadway, the Lady of Lute, doesn’t believe in The Day. She’s sure it’s just superstitious nonsense. That the very specific death toll on that very particular day is either chance or confirmation bias – that the deaths have been recorded on that day to keep the legend alive.

But she’s never experienced The Day, either. She met Hugh Treadway on a cruise, seven years ago on The Day. Hugh thinks he’s going to take them all to the mainland for an anniversary trip so that he can avoid, yet again, the potential consequences of The Day. When Lute keeps them home, Nina gets to experience The Day for herself – as she and her children are held hostage to a potential fate that she refused to believe in – until it was too late.

Escape Rating A-: I usually say that I prefer to sidle up to horror, rather than hitting it head-on, and that’s so very true of the story in Lute. It’s easy to believe, right along with Nina, that whatever happens in Lute on The Day isn’t quite what actually occurs, so the dread creeps up on the reader just as it does on Nina.

But once it’s there, it’s really, really there. Particularly as, just as in the Final Destination movies, the cause of the horror isn’t a specific villain or monster. Not that there doesn’t turn out to be a villain in Lute – just that the villain isn’t the cause of The Day. More like its result.

More than anything else, though, the thing that Lute kept reminding me of was Shirley Jackson’s famous short story, “The Lottery”. Not that anyone gets stoned, and certainly not that there’s any overtones of scapegoating that many readers see in “The Lottery”, but the impersonal nature of the choosing, that for once the game is not rigged, and that the sacrifice seems to be made for a real benefit and not just superstition.

In the end, Lute is Nina’s story in a way that it never was Hugh’s, even though it should have been. The sacrifices and the responsibilities of being the Lady of Lute make Nina even as they break her husband and their marriage. And the story worked for me, even as horror, because in spite of just how serious and in the end terrible the situation gets to be, there still manages to be a bit of sweet and a sort of happy ending mixed in with the bitter.

Lute turned out to be the perfect book to read – and review – this Halloween season.