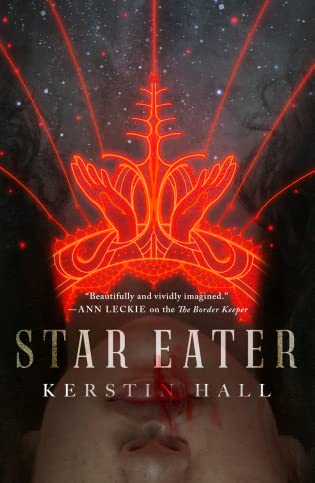 All martyrdoms are difficult.
Elfreda Raughn will avoid pregnancy if it kills her, and one way or another, it will kill her. Though she’s able to stomach her gruesome day-to-day duties, the reality of preserving the Sisterhood of Aytrium’s magical bloodline horrifies her. She wants out, whatever the cost.
So when a shadowy cabal approaches Elfreda with an offer of escape, she leaps at the opportunity. As their spy, she gains access to the highest reaches of the Sisterhood, and enters a glittering world of opulent parties, subtle deceptions, and unexpected bloodshed.
A phantasmagorical indictment of hereditary power, Star Eater takes readers deep into a perilous and uncanny world where even the most powerful women are forced to choose what sacrifices they will make, so that they might have any choice at all.

If absolute power corrupts absolutely, Star Eater is the story of a world that has put that absolute power in the hands of a mean girl clique. And it’s working about as well as one might think it would, because these mean girls have real power and are using it to destroy people’s lives AND play with politics, sometimes at the same time.

Once the reader is as far on that train as the worldbuilding will allow, the situation gets even more dire and much, much stranger, all at the same time, until the story reaches a conclusion that doesn’t quite feel like it was part of the book that we started with.

When the story opens, the protagonist, the point of view from which we will view this world, is about to be raped. It’s her duty as an Acolyte of the Sisterhood of Aytrium to present herself to the “Renewal Wards” once every few months in order to, well, propagate the species. Not the human species, but specifically the “Lace”-wielding (read as magic) members of the Sisterhood by allowing herself to be raped – and it is rape even though she gives forced consent for it to happen – by a man who has already been infected with the disease that men contract when they have sex with a woman who has “lace”.

If her visit to the Renewal Wards results in a pregnancy, if the child is male he will either be given away or killed. If the child is female, the birth of her daughter begins the countdown on her mother’s life. Because the only way that lace can be renewed is for women to literally eat the flesh of their comatose mothers.

You’re probably already creeped out. The person I attempted to describe this story to certainly was. It is seriously creepy and this world is utterly fucked up. There’s no other word for it.

The thing is, as bad as Elfreda’s situation is, and the situation of every single one of her Sisters, the situation on Aytrium as a whole is even worse than you’re imagining. The Sisterhood controls everything in Aytrium because they are the ones keeping the place literally afloat. All of Aytrium and the land that supports the city and everyone in it was jerked out of the crust of the planet below by the very first Sister of the Order. If they don’t keep pouring their power into the spells that keep the city floating, it will crash back down.

And maybe it should. 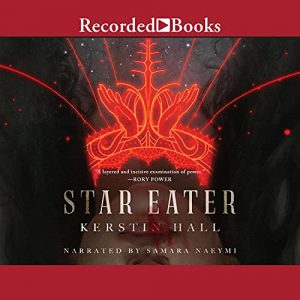 Escape Rating C+: This story is a hot mess and so is its protagonist Elfreda Raughn. And the story is not nearly as high-falutin’ or well-put together as the blurb would lead one to believe.

Although there are plenty of things about this world that honestly, I wish I didn’t know now that I’ve read the book. Or had it read to me. In the end, a bit of both.

In the beginning, the focus seems to be on Elfrida’s relationship with the Sisterhood, and that’s where the mean girls vibe comes in. Power corrupts, absolute power corrupts absolutely, and the Sisterhood has absolute power over the lives of everyone on Aytrium, especially the Sisters. While the power over everyone else is ordinary temporal power, the power over the other Sisters has a weird feel to it. It’s not just that Elfreda and the other Sisters regularly eat bits of their mothers, but the way that their mothers are kept comatose is referred to as martyrdom. And that Elfreda’s mother was martyred for political reasons and not because it was her time.

At the same time, the whole setup leads to the Sisterhood, and all of Aytrium, being ruled by a group of middle-aged women who are more interested in playing power games against each other than they are in running the place. Also, it feels like there are no elders among the Sisterhood because of the martyrdoms. Which feels like it matters more than it should, because it removes the possibility of hard-earned wisdom as a bit of a check on how bad things are both for the Sisters and for everyone else.

So part of the story is the poisonous internal politics of the Sisterhood. A second part wraps around a threat to that power, in the form of a semi-organized resistance movement made up of regular people, particularly but not exclusively men, who seem to be just about completely disenfranchised.

An organization, using the term loosely, which Elfreda’s best friends, Millie and Finn, seem to be an integral part of every bit as much as they are Elfreda’s life. Millie is Elfreda’s counselor (read Sisterhood-licensed therapist) and Millie’s brother Finn is the love of Elfreda’s life and vice versa, even if that relationship can never be acknowledged or consummated.

Either of those two scenarios would have been enough for a book. The repressive government and the resistance thereto, or the internal political squabbling of the all-powerful Sisterhood with its religious underpinning and its combination of “corrupt church” and “religion of evil” tropes fully on display.

Except that it gets crazier and weirder from there in ways that didn’t seem predicated on what happened so far and needed a bit of deus ex machina plot and character rescue at the end to make the whole thing tie itself up in a very messy bow.

In spite of all of the above, I have to admit that there were plenty of points where as much as I marveled at just how much shit this protagonist could manage to get herself into, and just how fucked up her world was, I felt compelled to keep reading after kind of a slow start. Elfreda’s story is the “Perils of Pauline” on steroids, out of the frying pan, into the fire and then jumping from one active volcano to another.

This is a trainwreck book, as in I knew it was going to have LOTS of awful things in it to see and read but I couldn’t turn my eyes away even when I wanted to. Hence that C+ rating. I was riveted even as I was appalled, and not in a good way. More like I couldn’t stop turning pages or sitting in the garage listening because I just couldn’t believe how much weirder and crazier it was going to get.

I mostly listened to this in audio through the NetGalley app. As I said above, the story is a hot mess. I have issues with the app. But the reader did an excellent job. I’d be happy to listen to her again, hopefully in a better story.