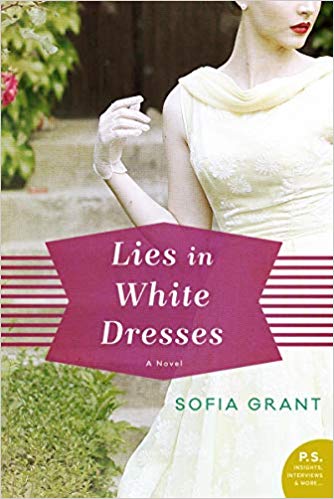 In the 1940s and 50s, women who needed a fast divorce went to Nevada to live on a ranch with other women in the same boat. This historical novel was inspired by the true stories of those who “took the Reno cure.”

Francie Meeker and Vi Carothers were sold a bill of goods: find a man, marry him in a white wedding gown, and live happily ever after. These best friends never expected to be on the train to Reno, those “lies in white dresses” shattered, their marriages over.

On board the train they meet June Samples, who is fleeing an abusive husband with her daughter, and take the vulnerable young mother under their wing. The three decide to wait out the required six weeks together, and then they can toss their wedding bands into the Truckee River and start new lives as divorcees.

But as they settle in at the ranch, one shocking moment will change their lives forever. As it brings their deceptions and fears into focus, it will also demand a reckoning with the past, and the choices that a person in love can be driven to make.

This is a story about secrets, and lies. The lies we live with, and the lies we discover that we can’t. It’s also a story about female friendship and paying it forward and figuring out who we are when we have to stand on our own.

And it’s a slice of a tiny but important portion of women’s history, when divorce, while still not commonplace, and still stigmatized, was at least possible – if you had enough time and enough money – or enough moxie to carry you through.

The “Reno cure” could be thought of as the hidden shadow behind the post-war late 1940s and the 1950s – that era of supposed normalcy and happy nuclear families – between the war years and the swinging 60s. Not all marriages were happy, and not all women were thrilled to give up the jobs and the freedom that they’d experienced during the war.

Frannie and Vi, middle-aged best friends from San Francisco, have come to Reno to get divorced from their cheating husbands. It seems as though they have finally both had enough, and that their well-to-do husbands are more than willing to pay for their six-week stay in Reno so that they can get divorced and live happily-ever-after, with other people.

Or that’s what the husbands’ want, and the wives have finally acquiesced.

Along the way, Frannie and Vi rescue young June Samples and her little daughter Patty, on their own way to Reno to endure those same six weeks at the cheapest and most down-at-heel hotel June could find, in the hopes that June can stay hidden long enough to get her own divorce.

The three women, a generation apart, bond together over their shared and secret truths. None of which turn out to be quite what the others thought as their journey began.

But in the end, they are all the better for it – no matter where that future leads them.

Escape Rating B+: The “lies in white dresses” that the title refers to are all those dreams that little girls have about so-called “perfect” weddings, a dream that is force-fed to those girls long before they are old enough to understand that their “dream” wedding is not the important part.

In their own ways, Frannie, Vi and June each bought into that “lie”, only to have discovered that they hadn’t looked nearly carefully enough at the hazy figure putting the ring on their fingers before it was far too late. Or is it?

June’s husband is an abuser. Frannie’s husband is gay – not that Frannie didn’t know. Vi’s is a narcissist who is constitutionally incapable of keeping his pants zipped.

In the wake of that “over” she gives her friends, both new and old, the gift of a fresh start. If they can manage to reach out and grasp it.

What makes this story work is the slow reveal, not of the secrets which are mostly obvious fairly early on – although Vi’s is a doozy that remains hidden the longest, and appropriately so. It works because we witness the events in the wake of Vi’s departure, and watch as her friends, her family, and their families move forward together, drawing closer ties between them every step of the way.

The story switches first-person perspective through every one of its major players, from the three women at its center, to the woman who plans to take Vi’s place, both her adult children and Frannie’s, and the hidden witness to the whole drama, the young wannabe detective whose mother runs the divorce ranch.

They all have their own secrets, they all tell their own lies, and they are all trying to make their way as best they can. Readers will identify and empathize with them each differently, depending on where we are and our experiencea in relation to theirs. I’ll admit that I found the pre-teen “Nancy Drew” crossed the line between precocious and “too precious”, and not in a good way. At the same time, the way that she redeemed herself at the end was a terrific moment.

In the end Lies in White Satin is a surprisingly involving story about just how supportive and empowering true women’s friendship can be. I do not envy them the times they lived in or the circumstances in which they found themselves, but the depth of their love for each other was wonderful to read.

P.S. One of last week’s books gave me a terrible earworm, as its title was a popular song in the 1980s. Lies in White Dresses also gave me an earworm, as its title scans exactly like Nights in White Satin by the Moody Blues, a song I remember being popular in the 1970s. The lyrics also fit in a peculiar way. But now both songs are endlessly repeating in my poor head!